India: Fight For Survival Of Cryptocurrencies In India

The nearly two-year long challenge by Indian cryptocurrency users, traders and exchanges, against the April 6, 2018 RBI circular1, which cut off such users' access to the formal economy has come to a close. On Tuesday, 28 January 2020 arguments in the writ petition challenging the circular before the Supreme Court were concluded and the judgment was delivered on 4 March 2020.

Ikigai Law filed the first petition before the Supreme Court in this matter on behalf of exchanges Koinex, CoinDCX, Throughbit and CoinDelta. A copy of the petition filed by Ikigai Law can be accessed here (part 1, part 2 & part 3). The firm worked with Senior Advocate Nakul Dewan and AoR Avinash Menon.

We have created a short summary of arguments made by both sides.

To put things in context, we begin with a brief timeline of events in India that affected the regulation of cryptocurrencies (or digital assets or crypto assets, as we prefer to call them).

This is followed by: 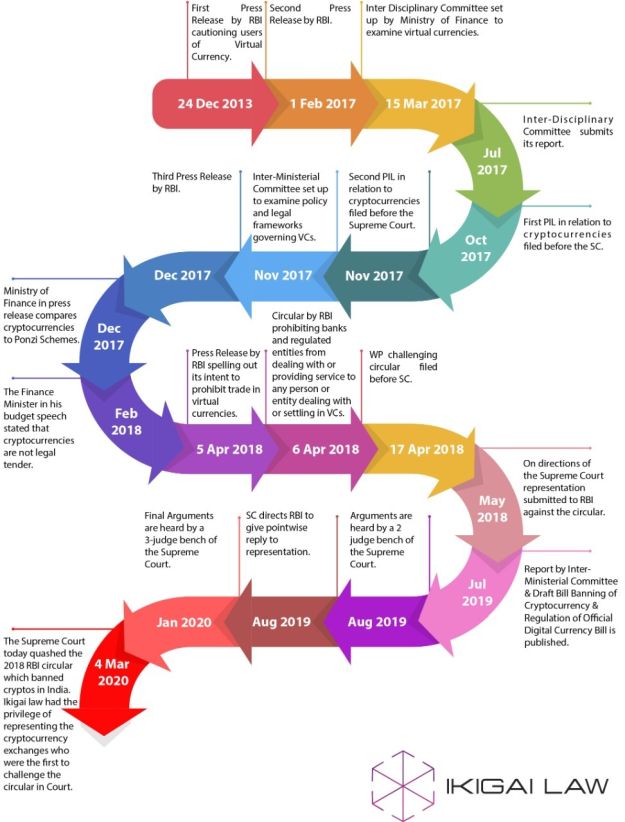 A. SUMMARY OF ARGUMENTS BY THE PETITIONER

1. On the legal character of virtual currencies

1.1 Virtual currency/cryptocurrency is not Money–

1.2 Certain characteristics of virtual currency resemble those of a "good".

1.3 Counsel for Petitioners cited a report prepared by the UK Jurisdictional Taskforce that examines certain legal issues pertaining to crypto assets and smart contracts2. The report characterises virtual currencies as "property" as they–

1.4 He also cited how courts in the US and Singapore have treated virtual currencies3.

2. The circular violates the rights of the Petitioners under Article 19(1)(g) of the Constitution to carry on their occupation, trade or business.

2.1 Virtual currency exchanges cannot carry out their business without access to banking channels.

2.2 The circular has restricted the ability of the Petitioners to access their own money for the purpose of a trade which is legal.

3. RBI has acted beyond the scope of its powers

3.1 The issuance of the circular by RBI was ultra vires. It is a colourable exercise of power as the RBI was apparently issuing directions only to entities that it had power over (i.e. banks and payment systems), however, has affected individuals and entity over which the RBI does not have any jurisdiction (i.e. users, holders and traders of virtual currencies)4.

3.3 The circular is the first instance when the RBI has issued its power to indirectly prohibit the trade of any good.

3.4 The concerns expressed in the press releases are directed towards "the users, holders and traders" of virtual currency i.e. consumers of virtual currencies. These are essentially means for consumer awareness. The RBI, as the apex regulator of monetary and fiscal policy in India, should not be concerned with consumer welfare. If RBI does want to protect consumers then it should be only in their capacity as depositors.

3.6 Although, the Banking Regulation Act, 1949; the Reserve Bank of India Act, 1934 and Payment and Settlement System Act, 1934 give the RBI wide powers, to take such regulatory action as it deems necessary in public interest, this does not amount to unfettered discretion. A statute must be read in its context.

4.1 RBI has irrationally deviated from its cautionary stance taken at the time of issuance of the first circular even though there was no change in the underlying facts and circumstances.

4.2 The circular rather than addressing the concerns/risks expressed (i.e. can be used for illegal illicit activities, no customer redressal mechanism etc.) in the preceding press-releases has only escalated them. Because of the circular many crypto-exchanges have been shut down. These exchanges had put in place KYC and AML mechanisms. Such mechanisms would allow law enforcement authorities to trace cryptocurrency transactions and also allowed for some form of consumer redressal as the crypto-exchanges would have mediated the transactions.

4.3 The counsel for the Petitioners, explained this point by giving the analogy of two concentric circles. If trade in virtual currencies occurred through crypto-exchanges, there would be two levels of checks on each transaction. Firstly, users would only be able to enter into a transaction by debiting or withdrawing money through their bank accounts (which would be KYC compliant). Secondly, the exchanges themselves carry out KYC and implement AML practices. The circular unravels this safety net, to a large extent, by cutting-off banks from the ecosystem. 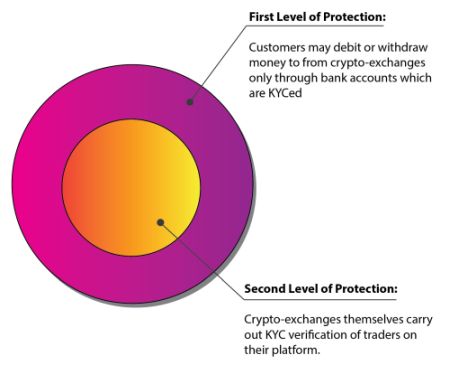 4.4 The circular does not ban crypto-trade but only bars banks and other entities regulated by RBI from providing any services to users, traders and holders engaging in virtual currency dealings. This means that crypto-trade may still be carries on in India, just not through banks. All crypto-trade has thus been relegated to the informal economy which amplifies the risks stated in the press releases, rather than arresting them.

4.6 The RBI had no empirical data before it through which it could draw the conclusion that virtual currencies were a possible threat to the payment or credit system of the country.

5.1 The RBI had without any material basis made up its mind to ban virtual currencies.

5.2 The RBI's pre-determined approach was evident through its conduct. In the deliberations of the inter-ministerial committee on 04.04.2018 (i.e. 2 days before the circular) when several government agencies were deliberating on best way to deal regulate virtual currencies, the governor of RBI at once interjected and expressed his view that virtual currencies should be banned. Notably, other regulators including DEA (Department of Economic Affairs- an agency which is responsible for preventing funding of terrorism activities) felt that regulating virtual currencies is better approach than a ban. Even SEBI (who would be more concerned with the speculative nature of virtual currencies), at this point was in favour of regulation than a ban. Two days letter RBI imposed its opinion on the public at large by implementing the circular. RBI has thus deliberately acted in an arbitrary manner with little to no regard of the rights of virtual currency users. This is an instance of "malice in law5".

6. Regulation of virtual currencies in other jurisdictions

6.2 Most developed economies including several G20 countries have chosen to regulate rather than prohibit them.

6.3 Countries that have on the other hand chosen to prohibit cryptocurrencies, are those which have a different set of constitutional values as opposed to ours.

7. How Virtual Currencies can be used to fight crime

Virtual Currencies have long been vilified because of the incorrect notion that they aid criminals in anonymously transmitting funds across the world. This is incorrect. Investigators have in fact successfully used virtual currencies to track criminals and prosecute crimes. For instance, the IRS traced and de-anonymised transactions done in virtual currencies to take down the largest dark web child pornography website in the world.6

B. SUMMARY OF SUBMISSIONS BY RBI

C. SUMMARY OF ARGUMENTS IN REPLY TO RBI'S SUBMISSIONS

Disclaimer: Ikigai Law were counsels to the four crypto-exchanges (Koinex, CoinDXC, CoinDelta and Throughbit) and certain traders in this matter.

Update 1 (28.02.2020): While the arguments are closed in the crypto writ petitions and the matter is reserved for orders, the learned Senior Counsel briefed by Ikigai Law, mentioned the petitions before the Supreme Court this Friday (28.02.2020) to update the court on judgments pronounced by the Court of Appeal in Singapore and High Court of Justice Business & Property Courts of England & Wales. The two judgments supported the statements made by the Counsel, that crypto currencies are akin to property.

Update 2 (4.03.2020): The Supreme Court has quashed the RBI circular imposing the banking ban on cryptocurrencies. It has also directed the unfreezing of bank accounts of the crypto-exchanges and refund of monies with interest. A summary of the judgment is available here.