by Samuel Wrest
Dezan Shira & Associates
To print this article, all you need is to be registered or login on Mondaq.com.

While India's SEZs are similar to those found in other parts of Asia, business leaders that are considering setting up in a SEZ should seek to understand how SEZs work in India. Each SEZ is unique. Many business leaders conduct market entry studies that compare sites, resources, incentives, and costs before making site visits.

The development of SEZs in India

The Indian government had long used export processing zones (EPZs) to promote exports. In fact, Asia's first EPZ was established in 1965 at Kandla, Gujarat state. While these EPZs had a similar structure to SEZs, the government began to establish SEZs in 2000 under the Foreign Trade Policy.

The government sought to use SEZs to redress the infrastructural and bureaucratic challenges that were seen to have limited the success EPZs. The government's SEZs are structured closely on China's successful model. They are designed to encourage domestic and foreign investment, boost India's exports, and create new employment opportunities.

Since the Act's promulgation, the Indian government has also accepted proposals for additional, far smaller SEZs, which must be proposed by developers to the Indian Board of Approval. The SEZ Rules, 2006 lay down the complete procedure to develop a proposed SEZ or establish a unit in an SEZ.

At least 221 SEZs are in operation, and by January 2018, a massive 423 have received formal approval for operation. While some observers argue that India's SEZs have not become as successful as those in China, India's SEZs remain an important sourcing and manufacturing destination for foreign investors.

Incentives for setting up in an Indian SEZ

Some incentives for setting up a sourcing or manufacturing platform within an Indian SEZ include:

After making a shortlist of SEZs for further examination, investors may find that specific SEZs offer other advantages that complement their business plans in India.

Ultimately, however, the benefits of India's SEZ policy have been substantial and have already served to exponentially increase the amount of foreign firms operating in India.

Since 2005, exports from the country have increased substantially, largely due to the rise in sourcing and manufacturing platforms.

There are many SEZs for your company to choose from – a list of which can be obtained from the Department of Commerce's website – and so deciding on which is best for you can often be a difficult and stress-inducing process.

For companies directly sourcing from or manufacturing in India, the site should be well placed to acquire the raw materials needed for production, while at the same time being in an area suited for export.

It used to be that this was a difficult balance to strike, but the government's emphasis on infrastructural investment means that procuring materials from other parts of India is becoming a lot easier. 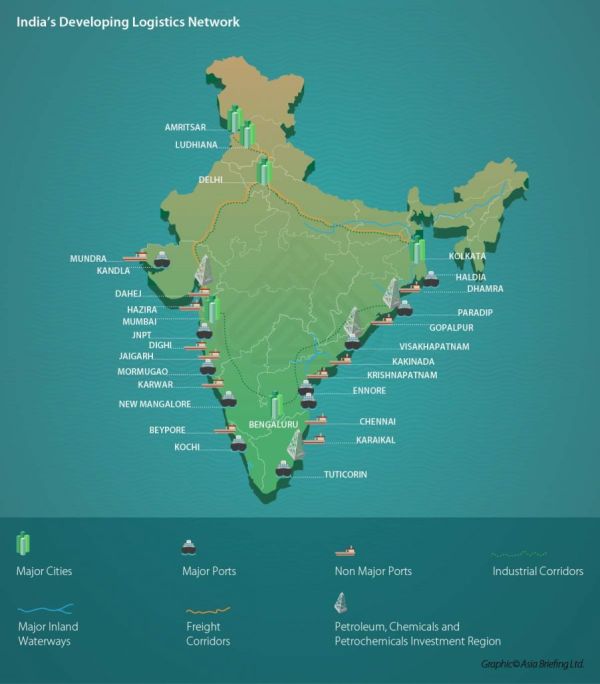 The Mumbai area hosts seven SEZs across Mumbai and nearby cities like Navi Mumbai, and Thane. Read more here.

Developing an SEZ in India

Developers can apply to the Indian Board of Approval to establish an SEZ where one currently doesn't exist.

Companies, co-operative societies, individuals, and partnership firms are all able to file an application, submitting the Form-A that is available on the Department of Commerce's website.

The required information for the form ranges from basic details, such as the name, address, and personal information of the applicant, to more specific details of the proposal, such as the type of land it will be set up on and its means of financing.

The amount of land that the proposal requires will determine what type of SEZ it will be. The different types are:

Any proposal will be first considered by the respective state government where the SEZ is to be located, before it receives formal backing from the Board of Approval.

ARTICLE TAGS
India Strategy Economic Analysis Industry Updates & Analysis
POPULAR ARTICLES ON: Strategy from India
Analysis Of The Union Budget 2021-22
Nexdigm Private Limited
One of the most distressing years by far, 2020 marked the year of a deadly pandemic that drastically impacted health, businesses, and communities across the globe.
Right to Strike Under Industrial Dispute Act, 1947
Paul & Associate
Every right comes with its own duties. Most powerful rights have more duties attached to them. Today, in each country of globe whether it is democratic, capitalist, socialist, give right to strike to the workers. But this right must be the weapon of last resort because if this right is misused, it will create a problem in the production and financial profit of the industry.
Semiconductor Integrated Circuits Layout Design In Indian IP Regime
Dubey & Partners - Advocates
In today’s dynamic and competitive environment, IP rights are key elements needed to maintain an edge in the market. It is crucial that the companies understand that what can be protected and how within their respective countries.
Legal Due Diligence
M. Kumar & Associates
Ease Of Import Cannot Be Achieved With Procedural Simplification Alone, Substantive Changes Needed
Kochhar & Co.
As part of the China backlash, the Japanese Government, like many others, is paying millions of dollars to Companies to move their factories outside China for the diversification of supply chains.
Union Budget 2020-2021
S.S. Rana & Co. Advocates
The Hon'ble Finance Minister Smt. Nirmala Sitharaman presented the Union budget for financial year 2020-21 in Lok Sabha on February 1, 2020.
FREE News Alerts
Sign Up for our free News Alerts - All the latest articles on your chosen topics condensed into a free bi-weekly email.
Register For News Alerts
Article Tags
India Strategy Economic Analysis Industry Updates & Analysis
Related Articles
Ease Of Import Cannot Be Achieved With Procedural Simplification Alone, Substantive Changes Needed Kochhar & Co.
Analysis Of The Union Budget 2021-22 Nexdigm Private Limited
Recent Legal Developments In India IndusLaw
India Business Guide - Start-Up To Set-Up (2021) Vaish Associates Advocates
India's Electronics Industry Incentives Offered By Central And State-level Schemes Nexdigm Private Limited
Mondaq Webinars
International Arbitration and Cyprus
Patrikios Pavlou & Associates
Webinar Limassol Cyprus
International Transfer Pricing Trends from a Swiss Perspective - Practical Tips and Lessons Learned
Tax Partner AG
Webinar Zurich Switzerland
More Webinars
Comparative Guides
Alternative Investment Funds
Blockchain
Cartels
Cybersecurity
Data Privacy
Mondaq Advice Centres
India
Trademarks
India
Arbitration, Litigation and Conciliation
India
Insolvency
Global
Trademarks in SAARC Countries
Global
Investment Immigration
More MACs
Upcoming Events
Mondaq Social Media