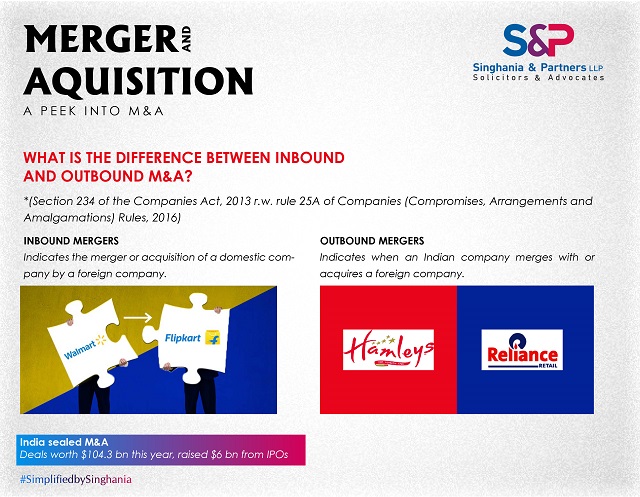 Section 234 of the Companies Act, 2013 which was brought into effect from 13th April 2017, provides for the legal framework and hence, operationalising the concept of cross-border mergers.

Cross-border mergers is governed by the following laws in India:

Eg. Acquisition of a 77% stake in Flipkart by Walmart.

Another example could be Acquisition of Ranbaxy by Diachi.

There was no provision of Outbound mergers prior to the implementation of the Companies Act, 2013. The Reserve Bank of India (RBI) issued the Foreign Exchange Management (Cross Border Merger) Regulations 2018 to regulate cross-border mergers.

"Merger or amalgamation of a company with foreign company. —
(1) The provisions of this Chapter unless otherwise provided under any other law for the time being in force, shall apply mutatis mutandis to schemes of mergers and amalgamations between companies registered under this Act and companies incorporated in the jurisdictions of such countries as may be notified from time to time by the Central Government: Provided that the Central Government may make rules, in consultation with the Reserve Bank of India, in connection with mergers and amalgamations provided under this section.

(2) Subject to the provisions of any other law for the time being in force, a foreign company, may with the prior approval of the Reserve Bank of India, merge into a company registered under this Act or vice versa and the terms and conditions of the scheme of merger may provide, among other things, for the payment of consideration to the shareholders of the merging company in cash, or in Depository Receipts, or partly in cash and partly in Depository Receipts, as the case may be, as per the scheme to be drawn up for the purpose.

Rule 25A of the Companies (Compromises, Arrangements and Amalgamations) Rules, 2016:
Merger or amalgamation of a foreign company with a Company and vice versa.
(1) A foreign company incorporated outside India may merge with an Indian company after obtaining prior approval of the Reserve Bank of India and after complying with the provisions of sections 230 to 232 of the Act and these rules.

(2) (a) A company may merge with a foreign company incorporated in any of the jurisdictions specified in Annexure B after obtaining prior approval from the Reserve Bank of India and after complying with provisions of sections 230 to 232 of the Act and these rules.

(b) The transferee company shall ensure that valuation is conducted by valuers who are members of a recognised professional body in the jurisdiction of the transferee company and further that such valuation is in accordance with internationally accepted principles on accounting and valuation. A declaration to this effect shall be attached with the application made to the Reserve Bank of India for obtaining its approval under clause (a) of this sub-rule.

(3) The concerned company shall file an application before the Tribunal as per provisions of section 230 to section 232 of the Act and these rules after obtaining approvals specified in sub-rule (1) and sub-rule (2), as the case may be.

The existing legal framework for M&A in India is favourable to attract foreign investment. At the same time, this allows Indian companies to have global market access which in turn would increase India's global economic presence. The current legal framework of cross-border mergers is still at a nascent stage, however, the government is taking sufficient steps to provide a smooth enabling environment for the same.

ARTICLE TAGS
India Corporate/Commercial Law Corporate and Company Law M&A/Private Equity
POPULAR ARTICLES ON: Corporate/Commercial Law from India
Reverse Merger: Is The Backdoor Still Open?
Singhania & Partners LLP, Solicitors and Advocates
Mergers open doors for rapid inorganic growth, which is aimed at corporations across the world. We have seen what mergers are, their stages, types, and inbound and outbound mergers.
Indemnity Laws For Drafting Indemnity Clause In Commercial Contracts
Agama Law Associates
The term "Indemnity" can be defined as a security or protection against a financial burden. In an indemnity claim, a party ("Indemnifier") promises to protect another party
Some Recent Trends In Oppression & Mismanagement Cases Under The Companies Act, 2013
Factum Law
The provisions regulating oppression and mismanagement in companies are an integral part of corporate governance. They ensure that interests of a company are protected and that no shareholder or...
Analysis Of Indemnity Under A Contract
Ahlawat & Associates
The term indemnity derives from the Latin word "indemnis," which denotes ‘to be unharmed or to have no losses or damages'.
Amendment In Manner Of Keeping Books Of Accounts And Other Papers In Electronic Mode
AZB & Partners
The Ministry of Corporate Affairs ("MCA"), by way of a Notification dated August 5, 2022, has amended the Companies (Accounts) Rules, 2014, making certain changes in respect...
Intricacies Involving Termination Of A Contract Without Adhering With The Due Procedure
S&A Law Offices
Termination of contract is considered to be lawful when a legitimate reason exists to end the contract before performance has been completed.
FREE News Alerts
Sign Up for our free News Alerts - All the latest articles on your chosen topics condensed into a free bi-weekly email.
Register For News Alerts
Article Tags
India Corporate/Commercial Law Corporate and Company Law M&A/Private Equity
Related Articles
Contract Manufacturing: A Holistic View Ahlawat & Associates
Building Bonds: The Mechanics Of India's Debut Sovereign Green Issuance S&R Associates
The Second Monaco Memo And Its Implications For Indian Companies IndusLaw
Corporate Democracy – A Balancing Act Between Interests Bharucha & Partners
Being A Conscious Business : Reflections Against The Mirror Of ESG Agama Law Associates
Mondaq Webinars
Malta as an e-Money and Payment Services Centre
GVZH Advocates
Considering the Nigerian Start-Up Act & The Opportunities for Tech
Oake Legal
More Webinars
Comparative Guides
Alternative Investment Funds
Artificial Intelligence
Aviation Finance
Aviation Regulation
Blockchain
More Guides
Mondaq Advice Centres
India
Trademarks
India
Arbitration, Litigation and Conciliation
India
Insolvency
Global
Trademarks in SAARC Countries
More MACs
Upcoming Events
Mondaq Social Media