The Competition Commission of India (herein after CCI) passed an order dated October 20, 2022, imposing a monetary penalty of INR 13,37,00,00,000 (USD) on Google for abusing its dominant position in multiple markets in the Android Mobile device ecosystem under Section 271 of the Competition Act, 2002 (hereinafter the Act). Apart from the monetary penalty, CCI had additionally issued a cease and desist order against Google for indulging in any acts in contravention of Section 42 of the said Act.

Brief background to the matter

In the present information filed by the Informants i.e. Mr. Umar Javeed, Ms. Sukarma Thapar and Mr. Aaqib Javeed under Section 19(1) (a) of the Competition Act, 2002 against Google LLC and Google India Private Limited (herein after Google) alleging abuse of dominant position by Google in the mobile operating system relating to markets by entering into restricting agreements contravening the provisions of Section 43 of the said Act.

Understanding 'Abuse of Dominant Position' with context to the said matter4

Dominant Position: a position of strength, enjoyed by an enterprise, in the relevant market, in India, which enables it to-

In violation of the above conditions, Google has dictated its terms to app developers compelling them to mandatorily use its own 'discriminatory practices' by imposing unnecessary/ restrictive contractual clauses on app developers and OEMs regarding Play service APIs, Anti- fragmentation obligations, thereby severely impacting the underlying competition in the market.

Allegations alleged by the Informants

Findings of the Director General

Observations made by the Competition Commission of India

The Competition Commission of India conducted a detailed analysis of the information and passed certain observations regarding the below mentioned allegations:

Besides the monetary penalty, CCI has also directed Google to establish a portal providing options for default search engine in the initial phase in order to avoid speculations arising in the future.

The CCI has further directed Google to put forward a transparent policy for the data collected on this platform, its usage and risk of sharing this information with other entities and app developers.

It was also held by the CCI that the existence of Revenue Sharing Agreements (herein after RSA) between the OEM's and Google acted as an advantage for the latter to secure exclusive information veiling from its competitors.

Apart from these, various other direction have been issued regarding the anti- fragmentation obligations and licensing of Play Store to OEMs such as flexible default settings and easy distribution of apps through plat store in order to ensure market correction and interest of justice at the earliest.

The CCI has been given a time period of thirty days to provide the required financial details and supporting documents. 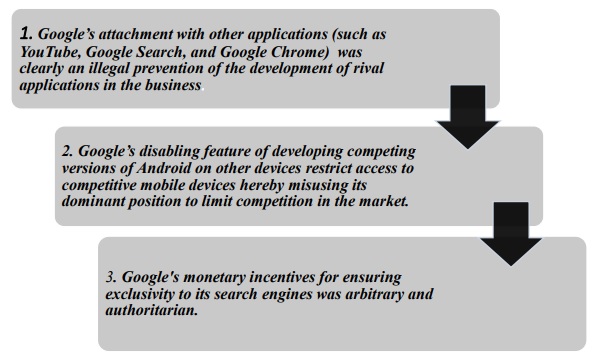 The CCI decision can act as a major setback for its Indian users since Android has provided ample number of opportunities to support and promote business transactions in India.

Moreover, risk for security at such reasonable prices can be another drawback that can tag along with the recent order of CCI.

8 condition in purchase or sale of goods or services; or

11 indulges in practice or practices resulting in denial of market access; or