In modern times, advertisements play an essential role towards promotion of ones' products and services. However, advertisers tend to make comparison of their products or services with those of the competing brands in order to promote their sales. B Natural used the names of its competitors Tropicana and Real Juice in a recent advertisement very creatively. 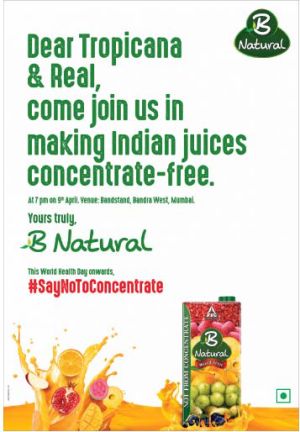 While engaging in such form of comparative analysis the advertisers must ensure that their advertisements observe fairness in competition. Comparison must not abuse the confidence of the consumer by representing misleading facts which in turn hampers the ability of the consumer to make an informed choice.

Although comparative advertisements are not prohibited in India, the Code for Self-Regulation formulated by the Advertising Standards Council of India (hereinafter referred to as "ASCI") monitors the legality of advertisements and only permits advertisements containing comparisons with other competitors provided:

While determining the legality of comparative advertisements, the Courts in India have laid down the following principles:

While advertising or selling products, the advertisers must keep in mind that any comparison or assertions made with any competitors' products must not violate the legal provisions causing disparagement to other brands.