by DMD Advocates
DMD® ADVOCATES
0 Liked this Article
To print this article, all you need is to be registered or login on Mondaq.com.

It gives us immense pleasure to circulate this special edition of DMD Advocates' Newsletter focusing on recent developments in the Insolvency and Bankruptcy law in India.

In this edition, we have covered recent judgements of Indian courts in relation to Insolvency and Bankruptcy Code, 2016. We have also provided a snapshot of cross-border insolvency and its current status in India. A robust cross border insolvency framework is need of the hour, specially in wake of the challenges in reviving Jet Airways and myriad of issues spread across jurisdictions, including, a Dutch court ordering bankruptcy proceedings against Jet Airways.

We are also pleased to announce that Mr. Anay Banhatti has joined DMD Advocates as a partner in our Mumbai office.

We hope you enjoy reading this edition and find it useful in your area of work.

Registered trade union can file a petition on behalf of its members under Section 8 of the Insolvency and Bankruptcy Code, 2016: Supreme Court

A two judge bench of the Supreme Court comprising Justice R. F. Nariman and Justice Vineet Saran, setting aside judgement of National Company Law Appellate Tribunal (NCLAT), has held that a registered trade union can maintain a petition as an operational creditor under Section 8 of the Insolvency and Bankruptcy Code, 2016 (IBC) on behalf of its members as the trade union is formed for the purpose of regulating the relations between workmen and their employer.

The court opined that a trade union is an entity established under the Trade Unions Act, and would therefore fall within the definition of "person" under Sections 3(23) of the IBC and therefore, an "operational debt", including a claim in respect of employment, could be made by a person duly authorised to make such claim on behalf of a workman.

The Court stated that "Rule 6, Form 5 of the Insolvency and Bankruptcy (Application to Adjudicating Authority) Rules, 2016 also recognises the fact that claims may be made not only in an individual capacity, but also conjointly. Further, a registered trade union recognised by Section 8 of the Trade Unions Act, makes it clear that it can sue and be sued as a body corporate under Section 13 of that Act. Equally, the general fund of the trade union, which inter alia is from collections from workmen who are its members, can certainly be spent on the conduct of disputes involving a member or members thereof or for the prosecution of a legal proceeding to which the trade union is a party, and which is undertaken for the purpose of protecting the rights arising out of the relation of its members with their employer, which would include wages and other sums due from the employer to workmen."

RDBA, SARFAESI Act and Insolvency Code do not prevail over PMLA, each to be construed and enforced in harmony: Delhi High Court

Justice R. K. Gauba of the Delhi High Court in a batch of appeals arising out of decisions of the appellate tribunal constituted under the Prevention of Money Laundering Act, 2002 (PMLA), has held that the Recovery of Debts and Bankruptcy Act, 1993 (RDBA), the Securitisation and Reconstruction of Financial Assets and Enforcement of Securities Interest Act, 2002 (SARFAESI Act) and the IBC do not prevail over PMLA as the objective of the PMLA is distinct from the purpose of the latter three legislations. Accordingly, the decisions of the appellate tribunal were over-turned.

The court held that, "PMLA, by virtue of section 71, has the overriding effect over other existing laws in the matter of dealing with "money-laundering" and "proceeds of crime" relating thereto."

The court further held that the PMLA, RDBA, SARFAESI Act and IBC (or such other laws) must co-exist and each should be construed and enforced in harmony, without one being in derogation of the other with regard to the assets respecting which there is material available to show that the same has been "derived or obtained" as a result of "criminal activity relating to a scheduled offence" and consequently being "proceeds of crime", under PMLA. 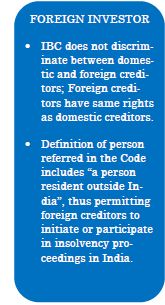 Provisions for Foreign Investors and Foreign Assets under IBC

Section 234: Provides for a mechanism for the government to enter into reciprocal agreements with the governments of any country for the purpose of enforcing provisions of the Code; Includes agreements for application of the Code to assets and property of corporate debtors, including personal guarantors, situated in foreign countries.

Section 235: In the course of the insolvency/bankruptcy proceedings, resolution professional/liquidator/bankruptcy trustee may make an application to the relevant adjudicating authority seeking evidence or action in relation to assets of the debtor/guarantor in a country with which India entered into a reciprocal arrangement; Concerned adjudicating authority may issue a letter of request to a competent court or authority of that country.

Inadequacies in IBC and Need for Cross-border Insolvency Framework 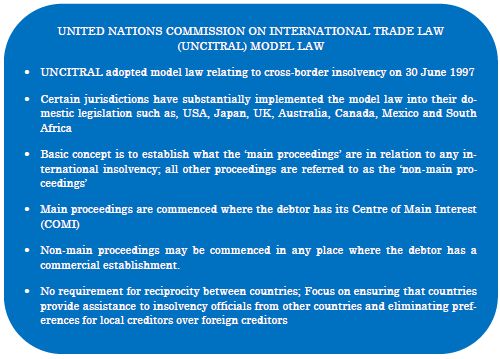 On 12 March 2019, the Government of India reconstituted the ILC as Standing Committee for review of implementation of the IBC and address the issue of, inter alia, cross border insolvency framework. The ILC is expected to submit its recommendations and amendments soon.

DMD Advocates is a leading full-service law firm with expertise in litigation, corporate, taxation, regulatory and intellectual property rights. The firm has a pan-India presence with principal offices in Delhi and Mumbai and associated offices in Bangalore, Chennai, Hyderabad, Cochin and Bhubanes-war.