India: Why Small Traders In India Fear The Amazon Effect 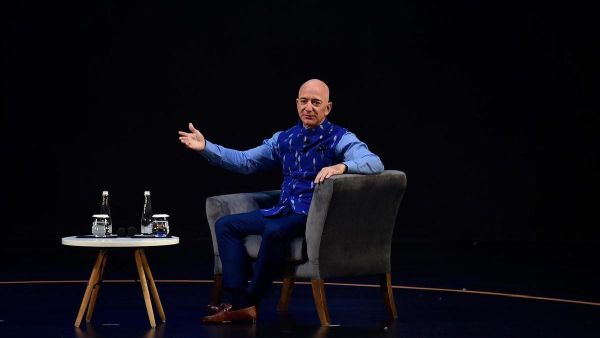 Jeff Bezos, chief executive of Amazon, speaks at an Amazon event in New Delhi, India. Mr Bezos unveiled an investment worth over $1bn aimed at digitising small and medium businesses in India. EPA

"People come into my shop and they look at the phones and ask questions, but then they go and buy them online because they're cheaper," he says.

With widespread concerns among shopkeepers in India about the impact of US online giant Amazon and Walmart-owned Flipkart on their business, Mr Jain is not alone.

"These business practices have unnerved traditional players who are at a disadvantage and the government has to listen to these players because of the nature of the Indian economy ..."
Rahul Agarwal, Wealth Discovery

As a result, e-commerce companies are not having an easy time. Following complaints from small traders, the country's antitrust watchdog, the Competition Commission of India, began its probe earlier this week into whether Amazon and Flipkart are violating competition law.

The move came ahead of Amazon chief Jeff Bezos' three-day visit to India, which began on Wednesday, where the billionaire was greeted with protests against the company from small business owners.

Analysts say the issue has been brewing for some time and has now reached boiling point as the e-commerce sector rapidly expands in India and the regulatory environment governing the sector continues to evolve.

"If you look at some of the developments in the last couple of years in the e-commerce sector, there has been a gradual build up towards this," says Ravisekhar Nair, a partner at Economic Laws Practice who co-heads the Mumbai firm's competition law and policy practice. "There has been a high-pitched advocacy on issues surrounding e-commerce, particularly its impact on MSME (micro, small and medium enterprises)."

India's e-commerce industry is expanding 30 per cent year-on-year, in terms of gross merchandise value, and is estimated to reach $200 billion (Dh734.64bn) by 2027, according to investment bank Morgan Stanley. This is propelled by rising middle class incomes and growing smartphone ownership in the country, which is bringing more consumers online in a country with more than 1.3 billion people. 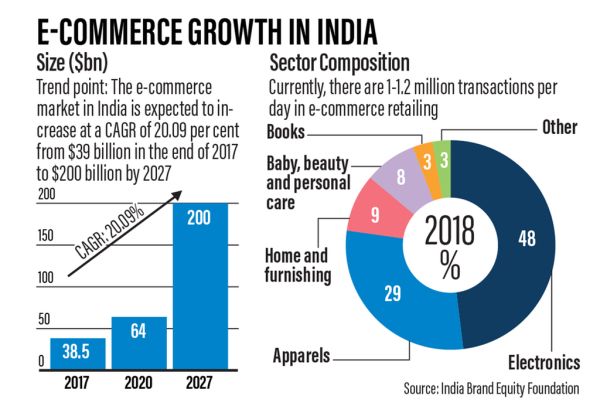 Graphic by The National

The opportunity has encouraged Amazon to invest heavily in India, while in 2018 US retail firm Walmart snapped up a majority stake in Flipkart, the country's homegrown rival to Amazon, for $16bn.

The sector's expansion means that the impact on small traders' businesses has only increased.

"Now since the space has reached a critical mass and developments in this space impact millions of stakeholders directly, it is obvious there would be much more scrutiny at each and every step," says Rahul Agarwal, the director at Wealth Discovery, a financial services firm based in New Delhi.

"These business practices have unnerved traditional players who are at a disadvantage and the government has to listen to these players because of the nature of the Indian economy, where these small business are responsible for creating a large number of jobs and employment for millions of ordinary Indian citizens."

The CCI probe is examining allegations that Amazon and Flipkart are offering heavy discounts and exclusive mobile phone launches and sticking to preferred sellers.

This follows new rules, introduced for foreign-owned e-commerce firms last February. Under the foreign direct investment policy, India banned e-commerce firms, including Amazon and Flipkart, from selling products from companies in which they own equity and placed restrictions on discounting and exclusive tie-ups with brands.

Amazon denies its practices are falling foul of the law.

"We welcome the opportunity to address allegations made about Amazon," Amazon India said in a statement. "We are confident in our compliance, and will co-operate fully with [the competition commission]."

"The Flipkart group is fully compliant with all applicable laws and FDI regulations," Flipkart says. "We take pride in democratising e-commerce in India and giving market access to hundreds of thousands of MSMEs, sellers, artisans and small businesses, making quality and affordable goods available to consumers through our transparent and efficient marketplace while creating lakhs of jobs."

Small businesses, however, accuse the two major foreign-owned entities of flouting these rules.

"They are engaging in predatory pricing and deep discounting, which is totally prohibited; this has adversely affected the business of millions of traders in India," says Praveen Khandelwal, the secretary general of the Confederation of All India Traders (CAIT), a lobby group representing traders. "Tens of thousands of shops have been forced to shut down because of e-commerce portals." 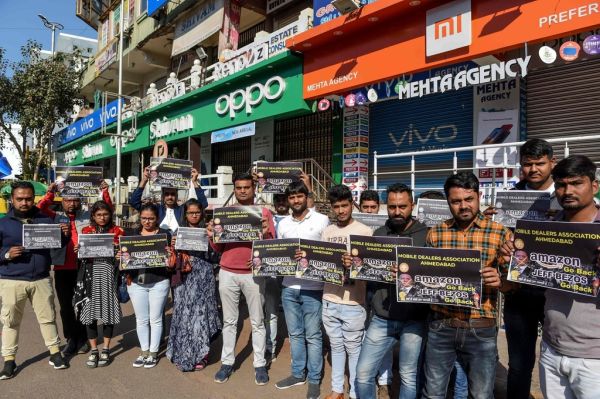 Mobile dealers and members of Ahmedabad Mobile Dealer's Association hold placards as they protest against online shopping platform Amazon outside their closed mobile shops in Ahmedabad on January 15. AFP

CAIT was behind the organised protests across the country that coincided with Mr Bezos' visit to India, where protesters carried banners with slogans such as "Jeff Bezos Go Back" and "Amazon Go Back".

When Mr Bezos visited India amid the protests, he took the opportunity to fend off criticism by stressing the contribution Amazon is making to the country's economy. 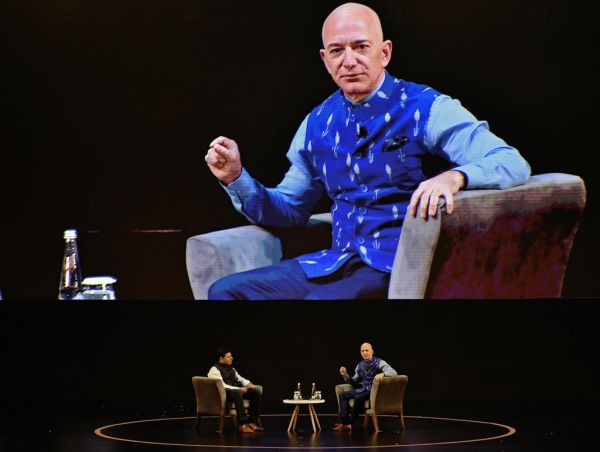 Mr Bezos received a bitter reception during his India visit this week after the country's antitrust regulator initiated a formal investigation hours before his arrival and infuriated small store owners demonstrated in the streets. Bloomberg

He unveiled plans to create 1 million new jobs in India - directly and indirectly - by 2025 through continued investments in technology, infrastructure and logistics. The tech mogul also said that the company plans to invest $1bn to help bring 10 million traders and micro, small, and medium-sized businesses in India online.

But India's commerce and industry minister Piyush Goyal was quick to point out that Amazon is losing money in India and there were questions over whether unfair trade practices are a factor in this.

Rakesh Mohan Joshi, professor and chairperson at the Indian Institute of Foreign Trade, says the CCI probe suggests a move towards a crackdown on unfair practices.

"The current investigations into the alleged unfair practices of mega-online platforms have exposed not only the loopholes in the e-commerce practices but also revealed that such practices would not go unnoticed," says Mr Joshi. "However, the law enforcing authorities need to be cautious and not create any unnecessary hurdles."

He adds that "online platforms need to adopt self-regulatory measures and adhere to ethical practices and at the same time the government should establish a robust regulatory framework to curb unfair practices".

This all comes as competition within the e-commerce sector is also on the rise. Reliance Industries, the oil-focused conglomerate owned by India's richest man, Mukesh Ambani, is taking on the likes of Amazon and Flipkart with its own online shopping platform JioMart, which recently started operations in limited areas as part of a soft launch. As an Indian-owned company, JioMart would not be subject to the same FDI restrictions applied to Amazon and Walmart-owned Flipkart.

As the e-commerce sector continues to grow, experts say clear regulation of the industry is extremely important.

"A country's regulatory and policy environment plays an important role in its economic growth," says Mr Agarwal. "While any rigid policy can hinder the economy, it is important to have a proper regulatory [framework] in place that can protect ... businesses from any unhealthy competition."

He notes, though, that "it is extremely difficult to take sides in this issue because although the traders and business have been at the receiving end ... the intense competition between these two players has been a boon to millions of customers who have ultimately benefited through lower prices, ease of buying and expansion in available product choices".

But tensions caused by the growth of e-commerce are not expected to be resolved quickly.

"It will take a fair while before the regulatory scrutiny of the e-commerce sector settles," says Mr Nair. "Until such time, we are likely to witness more debates among the stakeholders and perhaps more frequent interventions by various regulators."