by Peter Fenyves (Hong Kong)
The Sovereign Group
Your LinkedIn Connections
with the authors
To print this article, all you need is to be registered or login on Mondaq.com.

Hong Kong has had a lot to contend with over the last 18 months including country-wide protest action, Covid-19, the US-China trade war, not to mention the new National Security Laws and US President Trump ending Hong Kong's special trade status. The real impact of these events on the city are still to be seen but Hong Kong has been extremely resilient in dealing with great adversities in the past so, if history is anything to go by, it should bounce back.

Throughout all this uncertainty there continues to be a strong drive from Beijing to implement plans drawn up for the Greater Bay Area (GBA) and its goal of building a world-class city cluster across the Guangdong-Hong Kong-Macau region. As preferential policies for the region are put in place and barriers are taken down, it is more than just 'business as usual'. By 2030, the region is expected to play a leading role in advanced manufacturing, innovation, shipping, trade and finance.

The GBA project was first announced in 2016 by the Chinese government to spearhead growth and innovation in the nation's traditional manufacturing and innovation hub. It is an ambitious national plan aimed at integrating the two Special Administrative Regions of Hong Kong and Macao, together with the nine cities across the Pearl River Delta – Guangzhou, Huizhou, Dongguan, Shenzhen, Jiangmen, Zhuhai, Zhongshan, Foshan and Zhaoqing – to ease the flow of goods, people, and capital within the region. 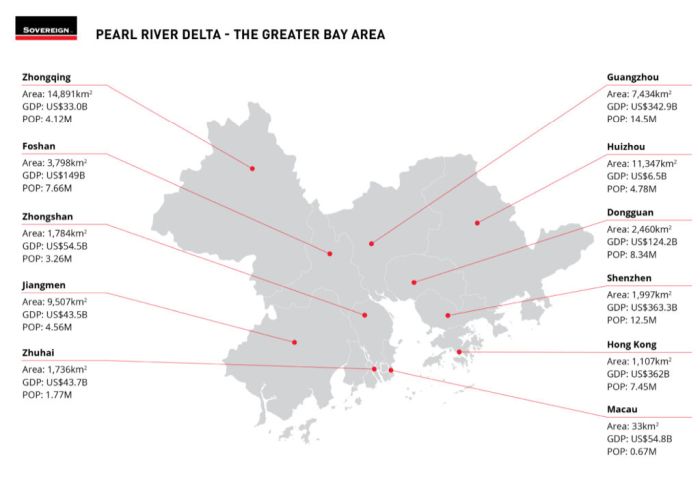 The ambitious project would connect all 11 cities with transport infrastructure including a high-speed rail network, and allow financial services from banking to wealth management to be liberalised within the area's geographic limits. The network of highways, railway links and bridges has slashed the overland travel time between Hong Kong and GBA cities, taking as little as 15 minutes to reach Shenzhen from Kowloon compared to several hours previously. This creates the possibility for Hong Kong residents to continue living in the city, but work throughout the GBA, or vice versa.

It is anticipated that the GBA will rival other well-known city clusters, such as the San Francisco Bay Area and the Tokyo Bay area, and will represent one of the largest urban areas both in size and population. The GBA is now the largest urban area in the world with a combined population of 72 million people and a current total GDP of about USD1.65 trillion – equivalent to the world's 11th-largest economy behind Canada and ahead of Russia – and provides a potential market 10 times the size of Hong Kong.. The Guangdong Province, which includes the megacities of Shenzhen and Guangzhou, generates about 14% of China's national GDP alone.

There is also ample land, and access to labour that can ease the two biggest headaches for most start-ups in Hong Kong: real estate prices and staff costs. Combined with cultural familiarity and a shared dialect, Hong Kong is in a unique position to take advantage of the GBA's benefits. Hong Kong Financial Secretary Paul Chan Mo-po said the GBA can provide Hong Kong with the potential market and the growth driver for taking the city's economy out of its worst recession in decades, and a grant by local authorities to funds start-ups is still up for grabs.

Many Hong Kong companies have already beaten a path to the GBA, with 69,292 Hong Kong companies investing a combined HK$2.67 trillion (US$390 billion) in the region at the end of 2019, according to Hong Kong government data. Total trade flow between Hong Kong and GBA cities on the mainland rose to CNY919.49 billion (US$134.37 billion).

Guangzhou, the provincial capital of Guangdong, took the largest share of Hong Kong's investments, with US$163.58 billion of capital, followed by the manufacturing hub of Dongguan at US$59.67 billion. Zhuhai, located across a narrow waterway from Macau, had US$37.96 billion of Hong Kong investments.
Shenzhen, home of the Chinese technology giants Huawei Technology, DJI and Tencent Holdings, had the biggest trade flow with Hong Kong, at CNY645.89 billion last year, followed by Dongguan at CNY164.27 billion and Guangzhou at CNY76.67 billion.

In May this year, the People's Bank of China, along with three other central authorities, unveiled new guidelines to support the financial reform and opening-up of the GBA. The guidelines encourage more cross-border business activities between Hong Kong, Macao, and mainland China to optimise the allocation of financial resources in the region and open up new opportunities for businesses operating in the insurance, securities, and wealth management sectors.

Chan said the Hong Kong government has been working with its mainland counterparts to implement the Wealth Management Connect. The cross border investment scheme announced in June will allow people in the GBA to buy investment products cross the border via banks. "This will bring enormous business opportunities to the entire financial industry in Hong Kong and reinforce Hong Kong as an offshore yuan business hub," Chan said.

Hong Kong in the GBA

Being the most open and international city in the GBA, Hong Kong is known for its status as an international financial hub with renowned professional services and a cutting-edge technology ecosystem. Its key attributes include:

Within the GBA, Hong Kong's main areas of focus are Fintech, biomedicine, AI and robotics, 'smart city' and Internet of Things' (IoT) technology, electronics and clean energy – all of which enjoy strong government support through the Innovation & Technology Fund, which embraces a number of different programmes:

In January 2019, Hong Kong and China signed an Arrangement on Reciprocal Recognition and Enforcement of Judgments in Civil and Commercial Matters between the Courts of the Mainland and of the Hong Kong Special Administrative Region. The Arrangement applies to both monetary and non-monetary judgments that are considered to be civil and commercial in nature under both Mainland and Hong Kong law.

It is expected that 90% of the civil and commercial judgments in Mainland China and Hong Kong can be mutually recognised and enforced. The need for re-litigation of the same disputes in both jurisdictions can be reduced, litigation costs can be lowered and the parties' rights and interests can be better protected, thereby promoting Hong Kong's status as a regional hub for international dispute resolution. Although the implementation date is still uncertain, the new Arrangement will establish a more comprehensive mechanism for the reciprocal recognition and enforcement of judgments in civil and commercial matters between Hong Kong and the Mainland.

It is no secret that the friction between the US and China is at its lowest point in decades. In August, the Trump administration issued its recommendations to ban Chinese companies that do not comply with US accounting standards from listing on US stock exchanges. The proposals would force the delisting of Chinese companies audited by firms whose work cannot be reviewed by the US Public Company Accounting Oversight Board because of Chinese government restrictions. The proposal recommends delisting companies that fail to comply with either requirement by 1 January 2022, while a ban on new listings that did not comply would come in immediately.

If these proposals progress, the biggest and most strategic Chinese companies will probably revert to their listings on China mainland exchanges but many companies in the tech and education sectors may choose Hong Kong, which has a large and well functioning stock market with a solid reputation. Alibaba, JD.com, and NetEase all recently filed new IPOs in Hong Kong. The Shanghai Stock Exchange lobbied extremely hard to win the Alibaba secondary offering but ultimately Hong Kong won (in our opinion because of the reputation ofHong Kong's capital markets). The Hang Seng index now allows companies with primary listings overseas to be included in their index for the first time.

Hong Kong has certainly gone through a tough 18 months, but there is a silver lining. I think we've highlighted some of the many positives Hong Kong and the GBA has to offer to its domestic as well as international business communities.

As a global powerhouse, China has put in place several measures to open up its economy to promote foreign investments. For foreign companies, Hong Kong still serves as an ideal point of entry with its robust English common law system and top-tier business infrastructures. Also, the implementation of policies and the provision of financial support by the Hong Kong government is testament to its commitment to fulfil its key objectives under the Greater Bay Area programme.

Dealing with cross-border commercial disputes is a nightmare and extremely expensive, even more so when it comes to China. With the mutual recognition of enforcement of judgements, client's interests are more protected when doing business in China through Hong Kong than was previously the case.

Lastly, Trump Administration's decision to ban Chinese companies from listing in the US for not complying with US accounting standards may very well create more opportunities for Hong Kong's capital markets. When one door closes, another opens.

Watch a recording on a related webinar here.