Worldwide: The BRICS Nations Are Headed For 50% Of Global GDP By 2030. This Is What It Could Mean For Developing Global Supply Chains & Emerging Consumer Markets

The Presidents and Prime Ministers of Brazil, China, India, Russia and South Africa have just returned from the annual BRICS summit, held this year in Brasilia. At the close of the event, the five leaders jointly issued a declaration of intent, part of the content which I covered in the article BRICS 2019 Summit Declaration. A key point of that declaration is the shared intent by the BRICS nations to "Coordinate actions at a global level to reach maximum economic growth."

This is a significant statement. By IMF estimates, the BRICS nations will account for over 50% of global GDP by 2030. Their influence is seen in many areas. In 2016, Russia became the largest wheat exporter in the world. China has the world's largest industrial and manufacturing capacity. India is to the fore of the scientific, technological and pharmaceutical fields. Brazil is endowed with abundant mineral, water, biological and ecological resources, and South Africa abounds in natural resources.

However, although the BRICS group is important, in itself it is not a trade bloc. That said, each of the member states have significant influence over significant global Free Trade or Preferential Trade areas. These are the entities:

Mercosur is a Free Trade area including Argentina, Brazil, Paraguay and Uruguay, and accounts for almost three-fourths of the total economic activity in South America. It is the world's fourth largest trading bloc after EU, NAFTA, and ASEAN, with an annual GDP of about US$ 5 trillion. Mercosur is home to more than 250 million people. The Mercosur bloc already has preferential trade agreements with India which I discussed partially in the article Linking India With Mercosur and the Southern African Customs Union, while I explained the potential for FTA with the Eurasian Economic Union in the article Linking The Eurasian Economic Union With Mercosur, and with China in the article Linking China's Belt & Road Initiative With Mercosur. Brazil is the dominant partner.

The Eurasian Economic Union (EAEU) comprises Armenia, Belarus, Kazakhstan, Kyrgyzstan and Russia, has a population of 183 million and a GDP of US$5 trillion. It effectively sits in the geographic landmass between the European Union and China. It is also attracting FTA from other countries; Iran, Serbia, Singapore and Vietnam all have FTA with the EAEU as does China. In the case of the Chinese, the FTA is not yet preferential and tariff reductions and eliminations are still being negotiated. But when this happens, it will be a supply chain game-changer and especially between Russia and China. India is also involved in FTA discussions with the EAEU. An overview of that can be read in the article India Turns Down The RCEP Free Trade. Will It Turn To The EAEU Instead? Meanwhile, when China agrees EAEU tariffs, it will have the effect of bringing Chinese made products, duty free, to the borders of the European Union. In the EAEU, Russia is the dominant partner.

The South East Asian Free Trade Area (SAFTA) includes Afghanistan, Bangladesh, Bhutan, India, Maldives, Nepal, Pakistan, and Sri Lanka. It includes a market of 1.6 billion people and is meant to have reduced the customs duties on all goods traded between members to zero. However, vested industrial and protectionist measures imposed by various member states out of the spirit of the original charter (which was supposed to operate like ASEAN) have meant that its attractiveness has been compromised. Accordingly we will not be seeing any FTA deals signed off with the SAFTA bloc until they clear these points up, an issue I discussed in an India/SAFTA explanatory article here. We are instead more likely to see India go it alone in additional Free Trade Agreements. It already has a preferential trade deal with Mercosur which is in the process of being expanded, and is in long term negotiations with the Southern African Customs Union over a deal. Vested interests in India and a highly politicized and protectionist business class get in the way of much of India's attempted progress to embrace Free Trade, and in this case it must be considered a weak link in the trade development of BRICS. Nonetheless, when it comes to SAFTA, India is the dominant partner.

The BRI itself is also not a Free Trade area – however it does provide preferential trade capabilities in addition to loans, finance and other assistance to countries who have signed off on the Belt & Road MoU. Additionally, a large number of countries that have joined the BRI also have Double Tax Agreements with China. Beijing has the sovereign capability to agree FTA between China and other countries and blocs, and has had considerable success with many of these, and especially with ASEAN. Beijing remains on the hunt to secure supplies, seek investment development opportunities and look at entering new markets. The Belt & Road Initiative is one way in which, on a detailed nation-by-nation basis, tailor project financing and if required trade incentives to individual countries on a bilateral and multilateral basis around the world. Some of these will develop into full FTA with other blocs such as those mentioned here, and this is especially true of the BRICS nations. China of course is the lead partner in the Belt & Road Initiative.

The Southern African Customs Union consists of Botswana, Lesotho, Namibia, South Africa, and ESwatini (Swaziland). The SACU Secretariat is located in Windhoek, Namibia, and was established in 1910, making it the world's oldest customs union. The SACU has a combined population of about 66 million, and is strategically placed across Southern Africa, including on both east and west coasts. This makes it an important region allowing access both to European as well as Middle East and Southeast Asian markets. The SACU has a Preferential trade deal with Mercosur, and has been negotiating for several years a similar arrangement with India. Meanwhile, Russia has been making considerable investments into Africa in recent years, and I have recently discussed the potential for connecting the Eurasian Economic Union with the Southern African Customs Union. China has also been a major investor in Africa, and again, a trade deal between China and the SACU appears feasible. In the SACU, South Africa is the dominant partner.

As can be seen, there are plenty of development opportunities for the BRICS nations to explore and develop trade and increase volumes within the organisations they already wield significant influence on. We can summarize these relationships by exploring a Map of the BRICS members and their respective Initiatives, Customs Unions and Free Trade Areas as follows: 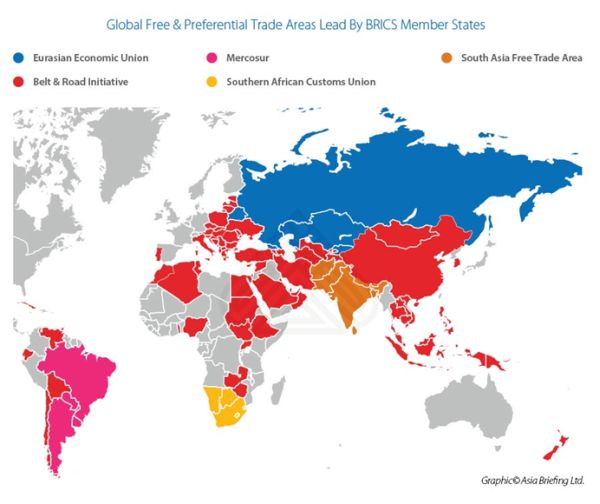 Yet even this map doesn't tell the full story. Developments not shown in the map are steaming ahead as we speak which will further enhance the BRICS influence on global trade:

Mercosur has associate members across most of South America; with several of these nations awaiting ratification from their respective Governments prior to joining. This includes Bolivia, Chile, Colombia, Ecuador, Guyana, Peru and Surname. Venezuela is also a Mercosur member yet has been suspended since 2016 for non-compliance with tariff reductions. This can be expected to be resolved over time. Mercosur in coming years can be expected to develop into a Pan-South American Free Trade Area.

The EAEU has is negotiating with numerous countries, including most of the ASEAN and multiple African nations concerning Free Trade Agreements. Among these are Cambodia, Indonesia, Thailand and the Philippines, along with Bangladesh, Mongolia, and Egypt, Morocco, Tunisia and Israel.

Zambia and Zimbabwe have expressed interest in joining, however Africa has recently agreed – including with the SACU a pan African Continental Free Trade Agreement (AfCFTA). That will reduce, over a five year period, tariffs on 90% of all products traded across Africa and will eventually supercede the need for the SACU. I discussed AfCFTA in some detail here.

Next year, Russia takes the Chairmanship of BRICS and Russian President Vladimir Putin has already stated that he wants to use this time to further enhance and develop the growing stature of BRICS, including with the United Nations. At the same time, the BRICS nations have expressed interest in developing alternative global payment systems, a BRICS cryptocurrency and generally creating a global trade model that is less dependent upon the United States, collectively seen as an abuser of power.

Then there is the BRICS bank – the New Development Bank. That has recently upgraded its operations and is beginning to provide project financing to the private sector within the BRICS region to get things moving ahead at a faster pace.

There is a long way to go. However, the BRICS have laid out their intentions and already individually possess or influence significant trade assets that if bought into collective use would bring into being a major shift in global supply chains, how we do business, and with whom. Global manufacturers looking at where new supply chains are emerging and where new consumer markets are developing should be keeping an eye on the BRICS group and how and when they intend to stitch together their collective component trade assets.