Hong Kong: What Do Employers Need To Know About The Hong Kong Contracts (Rights Of Third Parties) Bill?

The Contracts (Rights of Third Parties) Bill (the "Bill") has been introduced to the Legislative Council. If passed, Hong Kong will join a number of common law jurisdictions in reforming the age-old common law doctrine of "privity of contract".

Is this good news or bad news for employers? In our view, it is a mixed bag. There are some aspects of the Bill that employers can certainly take advantage of, but there are also pitfalls to look out for.

In this legal update, we consider the key changes and the risks from an employment perspective under the proposed new law anticipated by the Bill.

The Legislative Council is debating the Bill and we do not expect much movement until after October 2014.

What Is the Current Position?

Under the current law, only the parties to a contract have the right to enforce the contract terms. This means the contract cannot be enforced either by or against a third party (i.e., a party who did enter into the contract), even if it intends to confer certain rights or benefits on the third party.

The current law has been criticised as artificial. In some situations, it can cause commercial hindrance.

What Are the Key Changes?

The Bill will impact upon current employment practices, benefits and incentive schemes.

Perhaps the first point to note is that the Bill will not give a third party the right to enforce a term of an employment contract against an employee.

However, the Bill will give a third party the right to enforce (a) a term of the contract of employment against an employer and (b) a term of an employment-related contract (which we explain below) against a party to that contract.

This means in some cases, the third party will have the right to enforce an employment-related contract by bringing legal proceedings against the employer and the employee.

What Are the Opportunities and Risks?

As discussed above, the proposed legislation will not confer any right on a third party to enforce a term of an employment contract against an employee.

However, if the Bill is passed, it will facilitate a third party to enforce a wide range of employment-related contracts, such as:

Under the Bill, it is possible to "contract out" of the new law. This means the parties to the contract can expressly agree that the new law is not applicable to that contract, with the result that a third party cannot rely on the new law and enforce the terms.

(i) The good news for employers

The good news for employers is that the Bill will facilitate enforcement of some types of contracts. For example:

(ii) The bad news for employers

The bad news for employers is that the Bill will facilitate a third party in enforcing the following types of contracts and schemes against the employer. For example:

The following types of contract will also be affected by the new law: 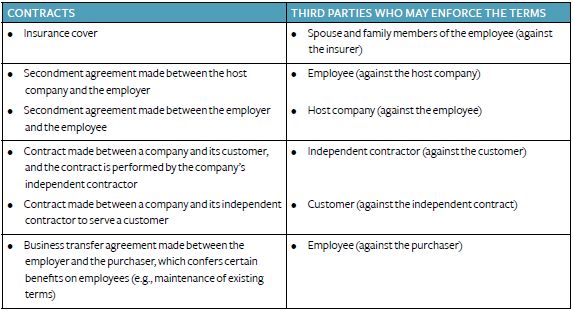 If you do not wish to have these unintended effects on the new contracts, you should start reviewing the Company's standard contracts, staff handbook, schemes and policies and opt out of the application of the new law.

(iii) Contracts not affected by the Bill

Some contracts will not be affected by the Bill:

Employers should keep an eye on the passage of the Bill and we will keep you updated.

If the Bill looks like coming into effect as law, then an employer should consider reviewing the range of employment and employment-related contracts and structuring them to maximise enforceability by third parties where this is desired and expressly excluding the law where it is not.

ARTICLE TAGS
Hong Kong Employment and HR Contract of Employment Litigation, Mediation & Arbitration Arbitration & Dispute Resolution
POPULAR ARTICLES ON: Employment and HR from Hong Kong
Hong Kong Statutory Maternity Leave Will Increase To 14 Weeks From 11 December 2020
Mayer Brown
The Employment (Amendment) Ordinance 2020 (the 2020 Ordinance), which increases the statutory maternity leave under the Employment Ordinance to 14 weeks, will come into effect on 11 December 2020.
Can A Hong Kong Employer Require An Employee To Submit To A COVID-19 Test?
Mayer Brown
The COVID-19 disease is regularly forcing changes on the world. One of them is likely to be the wish by an employer to be able to ensure that its employees are free of the disease.
Getting Employees To Take Annual Leave In Hong Kong
Mayer Brown
In a year where COVID-19 has restricted travel, many employers may find themselves with employees that have a substantial amount of accrued but untaken annual leave.
Hong Kong Court Holds Parent Company Liable For Employment Claims Of Subsidiary's Employee
Mayer Brown
It is not unusual for employees within a group of companies to be employed by one company within the group to perform work at or for other group companies.
Employment Spotlight: Statutory Hong Kong Maternity Leave Increases To 14 Weeks
Gall
The Hong Kong Government announced last week that The Employment (Amendment) Ordinance 2020 ("Ordinance") – passed by the Legislative Council on 9 July 2020 – will come into operation...
The Hong Kong Court Of Appeal Affirms Employees' Unfettered Statutory Rights To Be Paid Their Entitlements
Lewis Silkin
In this Court of Appeal case of Xu Yi Jun v GF Capital (Hong Kong) Limited (CACV 502 & 577 / 2019), the Court considered whether an employer can withhold a bonus payment after the payment due date for reasons of ...
FREE News Alerts
Sign Up for our free News Alerts - All the latest articles on your chosen topics condensed into a free bi-weekly email.
Register For News Alerts
Article Tags
Hong Kong Employment and HR Contract of Employment Litigation, Mediation & Arbitration Arbitration & Dispute Resolution
Similar Articles
Powered by mondaq AI
MATCH
69%
Commencement Of The Contracts (Rights Of Third Parties) Ordinance Jones Day
68%
One Day To Commencement Of The Contracts (Rights Of Third Parties) Ordinance Mayer Brown
68%
To Benefit Or Not To Benefit Third Parties... That Is The Question... Mayer Brown
65%
Contracts (Rights Of Third Parties) Ordinance: How It Can Assist Your M&A Transaction Mayer Brown
71%
Giving Third Parties Contractual Rights – The New Rules Mayer Brown
Related Articles
How Much Should I Offer My Employee In Hong Kong As An Ex Gratia Payment For Redundancy? Mayer Brown
Employment Spotlight: What Should An Employee Expect To See In A Standard Separation Agreement Gall
Five Things To Consider In Determining Bonuses In Hong Kong Mayer Brown
When Work From Home Is Over In Hong Kong: What Can Employers Do If Their Employees Don't Want To Return To The Office? Mayer Brown
Employment Spotlight: Statutory Hong Kong Maternity Leave Increases To 14 Weeks Gall
Mondaq Webinars
Patent Filing, Prosecution, and Enforcement in India
LexOrbis
Webinar New Delhi India
Trade, Competition and Foreign Subsidies: What New EU Rules Might Mean in the Wake of Brexit
Van Bael & Bellis
Webinar Brussels Belgium
More Webinars
Comparative Guides
Cybersecurity
FinTech
International Arbitration
Mondaq Advice Centres
Global
Trademarks in SAARC Countries
Global
Investment Immigration
More MACs
Curated Content
A Different Perspective To Employer`s Liability For Anti-Competitive Behaviors: Arçelik's Application For Leniency
ELIG Gürkaynak Attorneys-at-Law
Losing The Battle, Winning The War? – Ramifications Of The Newly Introduced Settlement Mechanism Under Turkish Competition Law
ELIG Gürkaynak Attorneys-at-Law
Upcoming Events
Mondaq Social Media