This decision concerns the field of user interface design and the question, to which extent text-correction is a technical task. Here are the practical takeaways from the decision T 2372/17 (Multi-word autocorrection/APPLE) of 25.2.2021 of Technical Board of Appeal 3.5.07:

Text correction as such is not technical. Text auto-correction could contribute to a technical effect if it were used in combination with other user-computer interaction techniques for facilitating the user's entering of text in a computer.

This European patent application concerns multi-word auto-correction which occurs when a user enters text with a touch-sensitive keyboard. The core idea was basically that a selection of an initial corrected word is revisited if a subsequently typed word indicates that it would be more appropriate to select a different correction for the initial word instead.

For example, the system may select an initial corrected word "new" based on a user's input of "nes". However, if the subsequently typed word is "york", then the system can revisit the selection of "new" and instead correct the initial word to "New" and select a corrected word "York" to replace the typed word "york". 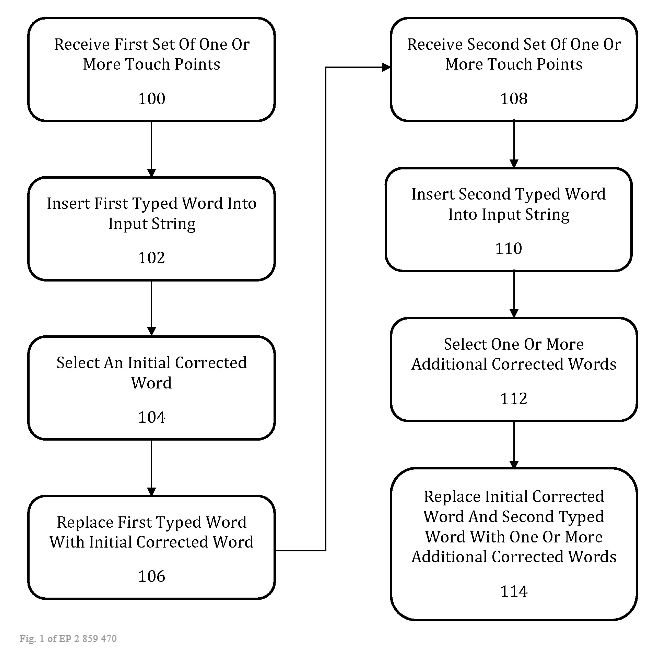 receiving (100) a first set of one or more touch points on a touch-sensitive keyboard;

inserting (102) a first typed word into an input string, including, for each touch point of the first set, inserting a corresponding typed character of the touch-sensitive keyboard into the input string;

replacing (106) the first typed word in the input string with the initial corrected word;

maintaining a correspondence between one or more characters of the input string and each of the first set of touch points;

receiving (108) a second set of one or more touch points on the touch-sensitive keyboard;

retrieving the first set of touch points based on the maintained correspondence;

selecting (112) one or more additional corrected words based on the retrieved first set of touch points; and

The first-instance examining division had refused the application based on lack of inventive step over the prior art on record, wherein some features were considered to relate to non-technical user requirements.

On the appeal stage, the board of appeal assessed whether teh auto-correction as claimed contributed to the technical character of the invention:

[...], linguistic aspects and presentation of information as such are not patentable pursuant to Article 52(2) and (3) EPC. Such features of a graphical user interface can be considered to contribute to a technical effect if they credibly assist the user in performing a technical task by means of a continued and/or guided human-machine interaction process (see decisions T 336/14 of 2 September 2015, Reasons 1.2.4, and T 1802/13 of 10 November 2016, Reasons 2.1.5 to 2.1.7).

However, the claim does not detail any interaction between the user and the computer in relation to the auto-correction that is taking place, and there is nothing to suggest that the user is taking into account what is being displayed. It is therefore doubtful that there is any continued and/or guided such interaction.

In view of this, the board doubts that the text auto-correction in the context of the claimed method contributes to a technical effect.

Therefore, the board held that no technical effect can be established by the distinguishing features, which concern presentation of information. As a result, the main request was found to lack an inventive step. Since none of the auxiliary requests was found to be allowable either, the appeal was dismissed in the end.