by Bastian Best
Bardehle Pagenberg
Your LinkedIn Connections
with the authors

In this case, the Board of Appeal had to decide whether the shifting from a distributed gaming system to a more centralised architecture involves an inventive step. Here are the practical takeaways from the decision  T 0683/17 of 3.12.2020 of Technical Board of Appeal 3.4.03:

The skilled person (a computer programming expert in gaming/betting systems) is aware of the advantages and disadvantages of a particular distribution of known functionalities in a centralised computer system as part of their common general knowledge.

This European patent application concerns a roulette betting system and a method for playing a modified version of roulette.

The betting system includes a central server system which comunicates over the Internet with one or more electronic roulette gaming areas. The central server system includes a series of servers carrying out various operations (a draw server with a random number generator to "spin" the electronic roulette, a database server, a bet acceptance server, an authentication server and a table management server.

The electronic roulette gaming area includes a central table including an electronic representation of a roulette wheel and electronic user interfaces (clients) for each player, such that the players can place their bets and follow the game. An embodiment is shown in Fig. 4: 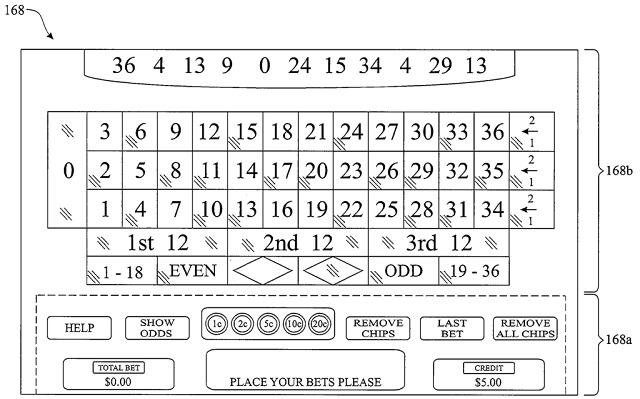 The modified roulette game consists in a series of roulette spins. After each spin the drawn number is removed from the game and replaced by a randomly selected number among the remaining numbers. After each round the odds of the game are calculated anew before the players can place bets.

But the roulette modification is less important in this case because the apparatus claims of the main request refer only to a central server system without any details about the actual modified roulette game.

More precisely, here is how the invention was defined in claim 1:

the database server (111) is adapted to stores [sic] persistent information,

The first-instance examining division had refused the patent application based on a lack of inventive step of the main request.

On the appeal, the board started its inventive-step assessment from a document (D5) which describes a roulette betting system comprising a remote central server and a table with an electronic display of a roulette wheel.

According to the board, the only difference between this system and the claimed one was the distribution of the various components:

3.3 Comparing the claimed system to the one in D5, the only differences relate to the distributed system architecture. In claim 1 of the Main Request a series of servers (database server, draw server, etc.) are defined, which are implemented within the central server system and carry out the various functionalities of the claimed betting system. In D5, the same functionalities are distributed between the central controller and the table(s). In addition, in D5 there is no mention of separate servers as in the claimed system, but rather of controllers and programs (instructions) executed in the central controller.

3.4 The claimed system has, thus, a more centralised architecture, since the various functionalities are implemented at the central server system and none of them locally, at the gaming table(s) or areas.

The question whether this difference contributes to the technical character of the invention was not even raised by the board. The board thus immediately spend thoughts on whether the shift in architecture was obvious:

3.4 [...] The board considers such an architecture of a centralised computer system generally known in the art. Its advantages and disadvantages with respect to a distributed architecture are also commonly known. It is known, for example, that a system whose operation is controlled centrally can be more flexible in that additional peripherals (gaming areas in the present context) can be added more easily, since all the necessary functionalities are controlled/carried out by/at the central server. Costs can be also saved in that the peripherals do not need to have the necessary resources to carry out functionalities which are executed by/at the central server. A centralised server can also control better the security of the whole network. On the other hand, it is also known that in a distributed implementation, with various functionalities carried out at/by (some of) the peripheral devices, technical problems (malfunctions) can be treated locally at the device (peripheral) where they occur without risking the operation of the whole system. Hence, when, for example, the "spinning" of the virtual wheel does not operate correctly at a table, only the table manager of the specific table has to be repaired, while the other tables can continue playing normally.

The board further noted that D5 provided some indication about a possible centralised implementation of the system, where the description stated explicitly that "[t]he controller 108 may be programmed to perform any or all of the functions described herein ..." and "[i]t is particularly contemplated that the table 34 may be a thin client controlled by the controller 108 ...".

3.8 In the board's view, such hints would be sufficient for the skilled person to contemplate a centralised implementation of the described system in D5, where the various functionalities are carried out by the central controller. Moreover, the board considers that the skilled person (a computer programming expert in gaming/betting systems) would be aware of the advantages and disadvantages of a particular distribution of known functionalities in a centralised computer system as part of their common general knowledge (see point 3.4 above).

3.9 The board is, therefore, convinced that the skilled person would select between a centralised and a distributed implementation of the various functionalities of the gaming system in an obvious manner, based on the circumstances and using only common general knowledge.

Accordingly, the board concluded that claim 1 of the main request did not involve an inventive step. Since the auxiliary requests were not admitted, the appeal was dismissed.