The German Federal Court of Justice (FCJ) follows up on its "Flügelradzähler" [Impeller Flow Meter] and "Palettenbehälter II" [Pallet Container II] case law and clarifies that the relevant point of reference for distinguishing between permissible repair and impermissible reconstruction is always the protected device. This also applies in cases, where the protected device is exclusively put on the market as an element of an entire device. In such cases, it is decisive for the distinction whether the technical effects of the invention are reflected in the replaced element(s). On this basis, the FCJ found that the exchange of a drum was a permissible repair of a drum unit and dismissed the corresponding patent infringement complaint.

In 2011, Canon and other manufacturers of imaging devices (printers and copying machines) voluntarily undertook towards the European Commission to adhere to a number of stipulations on environmental protection and energy efficiency. In particular, Section 4.4. of the voluntary agreement stipulates that (1.) OEM cartridges shall not be designed to prevent their reuse and recycling, and (2.) the machines themselves shall not be designed to prevent the use of a non-OEM cartridge.

In May 2014, Canon filed a complaint against two recycling companies based on infringement of the German part of the European Patent 2 087 407 (in the following: "patent-in-suit"). The asserted claim 1 is directed at a drum unit comprising a photosensitive drum and a coupling member. The "gist" of the invention of the patent-in-suit is that the cartridge can also be removed from the device (printer, copying machine) in a direction perpendicular to the rotational axis, while replacement of the cartridge in devices known in the prior art required that the driving shaft be moved horizontally in the direction of the rotational axis. The functionality to remove the cartridge perpendicularly is mainly based on the introduction of a coupling member, which is connected to the drum by means of a flange (not claimed). 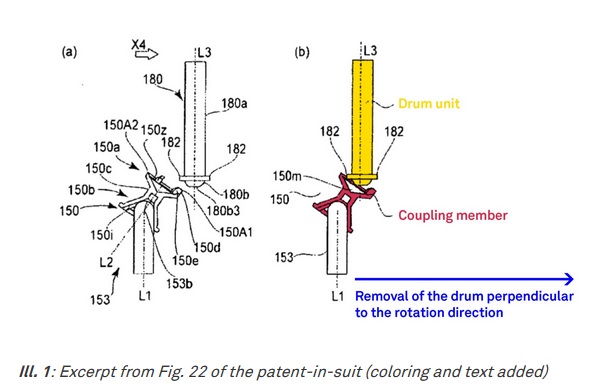 With its judgment of June 11, 2016, the Regional Court of Dusseldorf found that the Defendants infringed the patent-in-suit, in particular because the replacement of the drum constituted an impermissible reconstruction. Since there was no actual opinion of the trade ("Verkehrsauffassung") with regard to the replacement of the drums of the drum units, the Regional Court used to objective criteria for the distinction between repair and reconstruction, in particular the relation of the value, the technical function of the replaced part as well as the required effort. The Higher Regional Court of Dusseldorf dismissed the Defendants' appeal with judgment of April 29, 2016 and relied on a hypothetical opinion of the trade, which it determined by means of objective criteria.

With its judgment of October 24, 2017, the FCJ lifted the judgment by the Higher Regional Court and dismissed the complaint, thus amending the Regional Court's decision. In particular, the FCJ found that there was no patent infringement because there was no reconstruction – the FCJ regarded the replacement of the drum as a permissible repair, since the technical effects of the invention are not reflected in the drum.

With regard to the distinction between permissible repair, as a form of intended use, and impermissible reconstruction, the Court took its previous case law as a starting point, in particular its decision in the "Palettenbehälter II" [Pallet Container II] case. According to this decision, there is a two-step test for distinguishing between repair and reconstruction. First, it must be asked whether the replacement of the spare part is usually to be expected during the working life of the protected device (i. e. the point of reference for the distinction) in the actual opinion of the trade. If the answer to this question is "no", then impermissible reconstruction is at hand. If the answer is "yes", it must be asked in a second step, whether the technical effects of the invention are reflected in the replaced element and if, thus, the technical or economical advantage of the invention is realized again by the replacement. If this is the case, impermissible reconstruction is also at hand.

The difference between the decisions mentioned before and the case at hand was, however, that the claimed drum unit is exclusively put on the market as part of a comprehensive device, i. e. the toner cartridge. Therefore, the question was whether or, resp., to what extent the described FCJ case law was applicable to such a case. In this course, the FCJ had to answer the following two (new) questions: What is the point of reference for the distinction between repair and reconstruction – the claimed element or the comprehensive device put on the market? And: What is the criteria for the distinction when there exists no actual opinion of the trade?

However, the FCJ's answer to the second question was different to the previous' Courts' answer. In the case at hand, it was undisputed that there existed no actual opinion of the trade about whether the replacement of the drum is usually to be expected during the working life of the drum unit, since the drum unit is exclusively put on the market as a part of drum cartridges.

As a surrogate criterium, the Regional Court and the Higher Regional Court had tried to determine a hypothetical opinion of the trade, based on normative or, resp., objective aspects. Both Courts expressly and deliberately did not consider whether the technical effects of the invention were reflected in the replaced drum, since this criterium was only secondary to the opinion of the trade according to the "Palettenbehälter II" [Pallet Container II] case law.

However, the FCJ decided that in such case the opinion of the trade is eliminated as a criterium. Since there are no legitimate expectations of purchasers, the second step of the "Palettenbehälter II" [Pallet Container II] test is directly applied. And in applying this second step, the FCJ is merely an object of the inventive effects and that the invention was exclusively reflected in the coupling member (which was not replaced). Consequently, the FCJ did not regard the replacement of the drum as a reconstruction, and the rights of Canon to prohibit use of the attacked recycling cartridges were exhausted.

The distinction between permissible repair and impermissible reconstruction is one of the classical questions of patent (infringement) law. The FCJ's decision in the "Trommeleinheit" [Drum Unit] case continues the recent FCJ case law in a reasonable manner and brings clarity for cases in which the claimed device is exclusively put on the market as an element of an entire device.

It follows directly from Sec. 14 of the German Patent Act (PatG), which stipulates that the scope of protection of the patent is "determined by the patent claims", that the protected device should be the reference point. The FCJ convincingly explained in its "Flügelradzähler" [Impeller Flow Meter] decision that this is prescribed by the definition of the protected subject matter, thus, based on the patent claim; by doing so, the FCJ distanced itself, in particular, from the previous case law regarding the replacement of "functionally individualized parts".

In addition to that, it is also appropriate to rely on the technical surrogate criterium instead of a hypothetical or fictional opinion of the trade. Where there are no legitimate expectations of purchasers, there are also no corresponding interests to be protected. Thus, in such a case, only the interests of the general public to freely use the concerned device and the interests of the patentee in a compensation for his contribution to the prior art must be balanced. And the demarcation line between these interests is where the technical effects of the invention are objectified.

From the applicant's point of view, the present decision means that it can still make sense to claim an invention in the form of different degrees of concretization (here: coupling member, drum unit, cartridge or copying machine), and that it always makes sense, in the case of an infringement complaint, to carefully assess and chose the claims to be asserted, also with regard to the distinction between repair and reconstruction.