The development of new European regulations in trademark law, introduced in December 20151 by the « Trademark package », involves radical changes. The removal of the graphic representation requirement is certainly one of them.

Until then, signs which were capable of constituting a registered trademark were those capable of being represented graphically : in particular, words, including personal names, drawings, letters, numbers, the shape of goods or of their packaging, provided that some of the signs were capable of distinguishing the goods or services of one undertaking from those of other undertakings2. This list being non- exhaustive, it was admitted that sounds, odours or holograms could be registered as trademarks, provided they met the graphic representation criterion. This requirement imposed that such signs be capable of being represented graphically by means of images, lines or characters that were visually perceptible3.

Since the new European legislation, signs capable of constituting a registered trademark are those which are suitable to «be represented in the manner that enables competent authorities and the general public to clearly and precisely identify the object entitled to the protection conferred upon their holder»4. The graphic representation requirement is thus replaced by that of representation.

A sign can now be represented in any appropriate manner, using the technology available, and not necessarily graphically5. The only condition attached is that the representation shall provide sufficient guarantees in terms of clarity and precision6.

In practice, this means applicants now benefit from new opportunities. For the first time ever, they can register multimedia

marks, defined as those which combine image and sound, using MP4 files7. They can also register sound marks, motion marks or holograms (MP3 or MP4 files) without having to give any thought to their graphic representation. This progress stems from the need to modernise the trademark system and adapt it to the internet world8.

Multimedia, sound, motion and hologram marks that can be represented in electronic formats now constitute what is referred to as the « new types of trademarks » (or the new trademarks)9, as opposed to the ones we will here referred to, out of convenience, as 'old generation' trademarks (graphically represented): « traditional » trademarks (word and figurative) and « atypical » trademarks (in terms of colour, position or shape).

Since 1st October 2017, applicants have been able to register new trademarks as EU trademarks (EUTM) before the EUIPO. As soon as the Directive originated from the « Trademark package » will have been implemented by French legislature (due in 2019), these new trademarks will be registered before the French National Institute of Industrial Property (INPI).

According to the EUIPO's database, these new trademarks do not enjoy the same level of success: Sound marks generate some interest. Indeed, the electronic format in which they are submitted meets their need, being simpler and more adequate than the traditional registration. Hologram marks are rare (Since 1st October 2017, two have been registered). Multimedia and motion marks lie in between and it is difficult to say if end users will see them as innovative and attractive identification signs.

New types of trademarks are not distinct categories, strictly speaking. The assessment of their distinctive character must in principle be made in compliance with the criteria applicable to marks that are subject to graphic representation.

A sound mark, which was graphically represented by two notes on a musical stave, was judged to be lacking any inherent distinctiveness as it merely encapsulated a "standard" ringing tone available on any electronic or mobile device, which would mostly go unnoticed and would not be remembered by consumers because of its ordinariness 11. The outcome would certainly have been the same if the trademark had been submitted for registration in MP3 format.

The Court of Justice of the EU regularly reminds applicants that, although the assessment of distinctiveness applies to all categories of trademarks, the perception of the relevant public may vary depending on the category, making it harder to establish the distinctive character of trademarks belonging to a specific category rather than to another one12.

The distinctiveness of new types of trademarks will inevitably be assessed depending on their specificity, based on the fact that they do not appeal to the

same senses: sound marks are unlikely to be visually perceived as they aren't meant to be seen but heard. The same applies to motion marks which are not intended to be audibly perceptible.

In light of these principles, a sound, motion, or multimedia signal or an hologram that would be distinctly characterised by its « excessive simplicity »13 should not be able to be registered as a trademark if it fails to deliver a message consumer can remember unless it has acquired distinctive character through use.

It therefore seems fair to consider a sound mark, which is limited to the mere repetition of two identical notes (such as the standard ringing tone mentioned above) or the movement of two hands coming together and moving apart, cannot be registered because they cannot be perceived by the relevant public as an indication of commercial origin14.

The length of the mark can also be an issue: too short or too long, it could be incapable of identifying the origin. As it is not possible to draw up one unambiguous rule, assessment will be made on a case-by-case basis.

The sound signal composed of the unique and very short word « BARҪA » pronounced by a specific masculine voice was registered in the name of the Barcelona Football Club as an EU trademark15, probably considered by the trademark examiner as reasonably recognisable and memorable.

Likewise, the multimedia mark below was considered distinctive for goods designated in Classes 6, 16 and 24 :

And the company GOOGLE has recently obtained the registration of the letter « G » as an hologram :

Hologram mark broken down for the purpose of the article 17

In the context of objection procedures or infringement actions, the question arises of how to assess the identity or similarity of signs.

We may consider that there is an identity of signs between the sound mark (for example « BARҪA » mentioned above) and a word mark « BARҪA » – which would exclude any likelihood of confusion assessment - or does the recorded voice of the sound mark impose a 'similarity between the signs' approach as opposed to an 'identity' approach ?

What about the assessment of likelihood of confusion between two new trademarks (for example, motion or multimedia) or between a new trademark and an old generation one (motion/figurative) ?

It seems clear that the principles developed in the matter by the CJEU over the last twenty years for old trademarks should apply to the new ones18.

As such, the identical sign should be strictly interpreted as a reproduction « without modification or addition » of the prior trademark or which « viewed as a whole, (...) contains differences so insignificant that they may go unnoticed by an average consumer. »19

Whatever the type of trademark, the likelihood of confusion should be considered, « assessed globally by taking into account all factors relevant to the circumstances of the case ». « The global assessment of the likelihood of confusion, in relation to the visual, aural or conceptual similarity of the trademarks in question, must be based on the overall impression created by the trademarks, especially bearing in mind, their distinctive and dominant components. »20

Given the above, the assessment of the identity between two signs should not be of any difficulty: in our example above « BARҪA », even assuming that there might be a conflict between the recorded sound mark registered by the football club and an identical word mark filed by a third party, the signs should not be considered as identical because the second one, without no recorded voice, constitutes a sign that is sufficiently altered to be noticed by the average consumer.

The assessment of an imitative character seems rather delicate considering the myriad situations that can arise. The EUIPO currently finds itself at grips with these concerns regarding pending objection procedures - there are five objection procedures filed against motion marks and one filed against a multimedia mark. The Office hasn't rendered a decision, yet, and, to the best of our knowledge, the Paris District Court21, has not been seized with infringement nor invalidation cases involving these new types of trademarks.

The main issue stems from the assessment of signs displaying overall similarity from a visual, phonetic and conceptual point of view, supposing these three parameters can be taken into account. Here too, it would be desirable to identify these new types

of trademarks' distinctive and dominant components: Should a sound mark composed of music and lyrics be assessed globally ? Should music prevail over lyrics, or vice-versa ?

Here is an interesting example, which has recently been submitted to the EUIPO, and which we think perfectly illustrates the aforementioned issues. An English company opposed the registration of a multimedia EU trademark based on the precedence of its own national figurative trademark :

Prior trademark on which is based the opposition 22

Multimedia mark 23 broken down for the purpose of the article 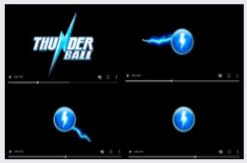 New types of trademarks offer marketing and advertising operational entities a field of possibilities, and so they should seize these opportunities. Jingles and videos will now be registered as such, without the need for a graphical representation.

The modernisation of the available technologies enables the comprehensive support of these new signs, which may be referred to as trademarks of the future. It is important to ensure that trademark law still applies and that new trademarks which would not be eligible if submitted in the traditional format, are not approved of when submitted in the new formats. Hence our surprise with respect to the decision of registration of the following multimedia mark, which is composed of a small heart that you can hear pounding, while, traditionally, figurative trademarks such as those represented below are rejected by the EUIPO for their lack of distinctive character : 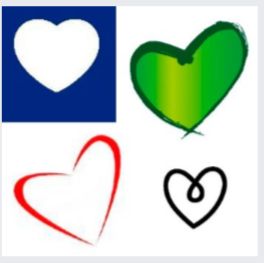 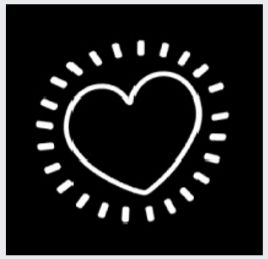 Practice still needs to be developed and fine-tuned, in full observance of existing rules, so that these new trademarks retain their function of identifying origin. In this regard, the EUIPO's launched, at the end of 2018, a Convergence Programme pertaining to these new types of trademarks (CP 11) in order to harmonise the practices of the various European trademark examiners as well as to extrapolate common principles regarding their registration and protection scope.