The recently released FinCEN Files Investigation is a collection of over 2100 Suspicious Activity Reports (SAR). These reports are compiled by financial institutions for the U.S Treasury Department's Financial Crimes Enforcement Network (FinCEN), about potentially suspicious transactions concerning USD 2 trillions worth of transactions between 1999 and 2017. The reports offer an unforeseen look into the world of global corruption, identifying the major banks that facilitated money laundering and the predicate crimes from drug trafficking, terrorist financing and enabling political corruption – all while generating profits for themselves and shareholders. At the forefront of the revelations are Deutsche Bank, who account for over 60% of SARs in the report and processed USD 1.3 trillion dollars in potentially suspicious transactions.

Deutsche Bank responded to the allegations by stating that no new information was revealed in the report, that all allegations occurred before 2016, and that they are "a different bank now." Yet this is not the first time this year that Deutsche Bank has received bad press. The revelations in the FinCEN files cast major doubt on Deutsche Bank's Chief Executive Officer, Christian Sewing, who has been at the forefront of its effort to repair its reputation since he became its Chief Executive in April 2018.

On July 7th, 2020, the New York State Department of Financial Services fined Deutsche Bank USD 150 million for its "significant compliance failures" in its relationships with Jeffrey Epstein from 2013-2018, Danske Bank Estonia from 2007-2015 and FBME Bank from 1999-2014; given the scandal-plagued history of Deutsche Bank these due diligence lapses seem routine.

In this three-part series, CGLytics begins by discussing past governance lapses at Deutsche Bank and its effects on shareholders. In the second part, we will examine the Consent Order issued by the New York Department of Financial Services against Deutsche Bank to uncover the extent of the gaps in diligence. Finally in the third we conclude with an examination of the revelations about Deutsche Bank (and other major banks mentioned in the FinCEN files) in conjunction with CGLytics data to show how a relative lack of risk, public affairs expertise and governance skills on the boards of big banks left them exposed to regulatory, reputational and financial risks. 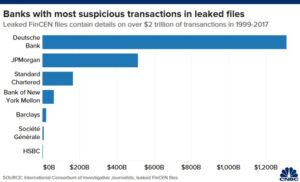 Deutsche Bank started in 1870 as Germany's introduction to international banking and rapidly expanded to Asia and through Europe within five years of opening. After losing assets during World War I, it rebounded through several mergers and acquisitions that allowed it to stave off the Great Depression. Deutsche Bank's original and most notorious governance lapse was during World War II, when the bank loaned the German government money to build the Auschwitz concentration camp and took part in the confiscation of over 300 Jewish-owned businesses between 1933 and 1938. After Germany was defeated the bank was broken up into multiple regional banks in 1948, however by 1957 the regional banks had merged to form Deutsche Bank AG with its current Headquarters in Frankfurt.

Deutsche Bank entered retail banking in the 1960's through small personal loans and continued with its international expansion throughout Europe and Asia. It opened its first branch in New York in 1979. By the mid 1990's, Deutsche Bank had become increasingly involved in investment banking in North America, culminating in the 1999 acquisition of Bankers Trust for USD 10.1 billion which made it the fourth largest bank in the world. Following the re-opening of the stock market after 9/11, Deutsche Bank was officially listed on the New York Stock Exchange (DB) allowing it to take advantage of the booming stock markets in the early-mid 2000's.

In the wake of the 2008 financial crisis Deutsche Bank's reputation began to falter. It had sold roughly USD 32 billion of collateralized debt between 2004 and 2008. Notably, Greg Lippman, (Deutsche Bank's former head of asset-backed securities trading) called bonds "crap" in internal emails to colleagues, but promoted them as top investments to the public. It was forced to pay a USD 1.93 billion settlement in 2014 to the US Federal Housing Agency for selling subprime mortgage backed securities to Freddie Mac and Fannie Mae. It was also forced to sign a USD 7.2 billion settlement with the US Department of Justice in 2017 relating to the sale of mortgage backed securities. The US Attorney General at the time, Loretta Lynch, stated that "Deutsche Bank did not merely mislead investors, it contributed to an international financial crisis".

In 2009, Deutsche Bank admitted it had hired a detective to spy on people who the Bank felt posed a threat, particularly a shareholder and a journalist. Deutsche Bank eventually fired its global head of investor relations for his involvement in the espionage, although the Bank's top executives claimed ignorance of the situation.

In 2015, it was fined a record USD 2.5 billion by American & British authorities for its involvement in the Libor interest rate (Libor rate is an average of what banks charge for lending to each other) scam between 2003 and 2007. During which its London branch pleaded guilty to wire fraud after accusations of manipulating interest rates which were in turn used to secure large international contracts and loans, essentially fixing foreign exchange markets. Regulators required Deutsche Bank to fire multiple directors and other executives as a result of their investigation.

Later that year Deutsche Bank was fined another USD 258 million for violating US Sanctions by conducting business with sanctioned countries such as Syria, Myanmar, Libya and Sudan. Regulators discovered that between 2000 and 2006, 27 200 dollar clearing transactions worth over USD 10.86 billion were disguised by Deutsche Bank. In addition to the fine, it was required to appoint an independent monitor and dismiss employees involved in the scandal.

In 2017 Deutsche Bank was fined USD 630 million by American and British regulators for lapses in their Anti-Money Laundering systems. Regulators say that Deutsche Bank failed to flag illegal transactions, completely lacking knowledge of who was trading what and where the money came from, known as 'Know Your Customer' (KYC). This resulted in over USD 10 billion being laundered out of Russia through 'mirror trades' between 2011 and 2015 through its Moscow, London and New York branches. Clients purchased stocks in Moscow then sold them at the same price through the London branch, with the end goal being that it would eventually be cleared through the New York branch's operations and be paid in US Dollars. Once again, as part of a consent order reached between Deutsche Bank and the New York State Department of Financial Services, Deutsche Bank was required to attain an independent monitor to review its internal compliance protocols.

Questions have also been raised about Deutsche Bank's relationship with President Trump. New York prosecutors subpoenaed Deutsche Bank seeking financial records that President Trump provided to it over the years, as they investigate possible fraud allegations. Their relationship goes back to the 1990's when Deutsche Bank was trying to establish itself as a mainstay in international investment banking. Deutsche Bank lent President Trump over USD 2 billion over decades despite numerous defaults up until his election. Former employees of Deutsche Bank's Anti-Money Laundering department stated that in 2016 and 2017 they flagged multiple transactions involving entities controlled by President Trump and prepared Suspicious Activity Reports, but top-level executives at the bank never escalated the alerts. Tammy McFadden, a former anti-money laundering specialist who stated she was forced out of Deutsche Bank after repeatedly raising concerns regarding internal compliance protocols stated: "You present them with everything, and nothing happens.it's the Deutsche Bank way. They are prone to discounting everything"

The various governance lapses Deutsche Bank had over the years took a toll on its share price, having declined over 80% since 2010, from as high as USD 123.60 before the 2008 financial crisis. Glass Lewis called on investors to vote against ratifying Deutsche Bank's Chairman, Paul Achleitner's actions at the Annual General Meeting due to "performance concerns". He announced, after three straight years of surviving shareholder votes to remove him, that he will step down once his term ends in 2022.

Previous CGLytics research unveiled a misalignment between pay and performance during Deutsche Bank's scandal plagued years. Deutsche Bank's Key Performance Indicators (KPI) were consistently negative between 2014 and 2018 due in part to the series of scandals. Management suspended variable renumeration to assuage shareholder concerns, yet once the bank returned profit in 2018 management immediately restored incentive payments which shareholders felt were always excessive.

Below are three graphs. The first shows Deutsche Bank's year end share prices since 2010, the second showing the relative compensation of its Chief Executive to his European counterparts between 2016 and 2018, and the third showing Deutsche Bank's CEO pay compared to performance, measured by Total Shareholder Return, over three years. 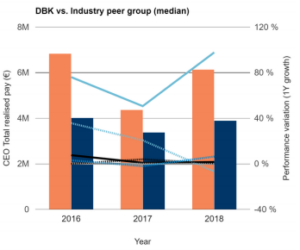 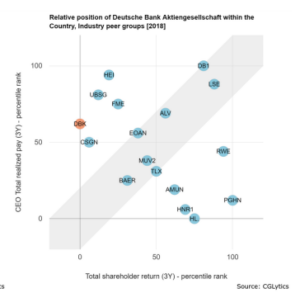 Historically, it has been difficult to quantify reputational risk as essentially these are the opportunities an institution fails to receive after bad press. The fines and consent orders levied on Deutsche Bank are easily identifiable from a regulatory perspective, and the subsequent share price decrease and fines again show the financial risk. Deutsche Bank's governance lapses highlight the importance of maintaining an honest top-down compliance culture, a good understanding of handling high risk clients, as well as the consequences if an institution fails this.

In the second part, we will examine the consent order issued by the New York Department of Financial Services regarding Deutsche Bank's relationship with Jeffrey Epstein, FBME & Danske Bank Estonia.

In the interim, how can financial institutions improve their corporate governance and gain oversight of their board effectiveness going forward? CGLytics governance data and analytics tools provide the board composition analysis companies, investors and service provides need, now and in the future, to reduce risk and ensure company success.