Curated Content Japan: Rise Of NFT In Japan And Potential Regulation On NFT

Most Popular:  Article Japan, February 2021
To print this article, all you need is to be registered or login on Mondaq.com.

"NFTs", or Non-Fungible Tokens, is a term that is not generally defined under Japanese law, but is generally understood to mean tokens minted on a blockchain that are irreplaceable. Because NFTs are digital data generated on a blockchain, but have the characteristic of being irreplaceable through the unique values assigned to them, their usage is increasing in various areas. For example, there are games in which in-game items are transferable on blockchain (hereinafter referred to as "Blockchain Games"). In Blockchain Games, unlike conventional games, users can own and manage their own unique in-game items and characters as NFTs. These NFTs can be freely transferred and sold on blockchain, even outside the game. In August 2020, Coincheck, a major crypto asset exchange service provider ("CAESP") in Japan, announced the launch of an NFT marketplace, and businesses using NFTs have been attracting increasing attention recently. The size of the NFT market was only about JPY 20 billion in 2019, and grew to about JPY 30 billion in 2020. This was only approximately 1/1000 of the total value of the crypto asset market. With that said, JPY 30 billion represents a tenfold expansion of NFT market since the beginning of 2018. Moreover, there are now a variety of businesses that utilize NFTs. There is therefore significant potential for further rapid growth in the NFT market.

As a legal matter, Blockchain Games give rise to the following issues: (i) whether in-game items issued as NFTs constitute crypto assets under the Payment Services Act of Japan (the "PSA"), and (ii) whether the issuance of such items amounts to gambling (which is a criminal activity under Articles 185 and 186 of the Penal Code of Japan (the "Penal Code")) if conducted via the so-called "gacha" (loot box) system. A related issue relates to the implementation of login bonuses or ranking campaigns to attract new players, which have to be carefully implemented so as not to violate the restrictions against premiums under the Act against Unjustifiable Premiums and Misleading Representations ("AUPMR").

CA is defined in Article 2, paragraph 5, of the PSA as:

For this purpose, "currency denominated assets" is defined in Article 2, paragraph 6, of the PSA as assets denominated in JPY or a foreign currency, or with respect to which the performance, repayment, or any other activity equivalent thereto will be carried out in JPY or a foreign currency. Based on this definition, a digital coin whose value is pegged to JPY, USD, or any other fiat currency (such as, for example, where the price of a digital coin is always fixed at one JPY or one USD, or where a digital coin is redeemable at one JPY or one USD) would fall outside the definition of CA.

A business operator that conducts business constituting crypto asset exchange services ("CAES") will be required to undergo registration as a CAESP under the PSA.

Article 2, paragraph 7, of the PSA defines CAES as engagement in any of the following activities as a business:

Additionally, CAESPs are required to comply with the relevant regulations under the PSA, including the following:

Applicability of NFT to Crypto Asset

Since NFTs are digital items minted on a blockchain and are exchangeable for other Type I CAs such as Ether, the question is whether NFTs also constitute CAs under the PSA.

As noted above, Article 2, Paragraph 5, Item 1 of the PSA stipulates, in respect of Type I CAs, that they "pay an unspecified person the price of any goods purchased or borrowed or any services provided", i.e., that they serve an economic function, such as the function of a means of payment.

If, on the other hand, NFTs themselves do not serve as a means of payment, but are exchangeable with Bitcoin, Ether, or other Type I CAs between unspecified parties, they would seem to fall within the definition of Type II CAs.

Nevertheless, the PSA serves to "ensure the appropriate implementation of services related to payment settlement, user protection, etc.,... and contribute to the improvement of the safety, efficiency and convenience of payment settlement systems", and is premised upon the regulation of means of payment with settlement functions (Article 1 of the PSA).

Furthermore, according to the Crypto Asset Guidelines I-1-1(iii) published by the Financial Services Agency of Japan (the "JFSA"), one of the factors for determining whether an asset constitutes Type II CA is "whether the CA has the same economic function as the relevant CAs, in addition to being a product, right, etc. that can be purchased or sold using Type I CAs".

In light of this, even trading cards and in-game items recorded on a blockchain that are exchangeable with Type I CAs would not constitute Type II CAs, if they do not serve economic functions such as a means of payment, like Type I CAs.

Therefore, if the specifications or functions of NFTs are limited, for example, to trading cards and in-game items, and do not extend to economic functions such as a means of payment like Type I CAs, they would not constitute Type II CAs as well.

However, whether or not a specific NFT serves economic functions like Type I CAs and falls within the definition of Type II CAs should be examined and judged on a case-by-case basis, based on the specifications and functions of that NFT (as designed by the content holder), the structure of the application or platform within which the NFT is used, and the form of usage of the NFT.

Under the Penal Code, gambling is a criminal offence punishable by law. "Gambling" is understood as (i) the placing of wagers on properties, (ii) competing for acquisition or loss of property or property rights (iii) and where the outcome (of loss or gain) is decided by chance.

If a Blockchain Game adopts such a system and items acquired therein can be sold to external parties, such game would involve the three constituents of gambling discussed above. In such a case, there would be a high risk of the Blockchain Game being deemed gambling under the Penal Code.

In recently developed games (including Blockchain Games), it is common for items to be distributed: (i) to attract new players, (ii) to keep existing players in the game, (iii) according to the level of progress in the game, and (iv) according to the player rankings. With respect to Blockchain Games, when distributing bonuses in the form of tokens as incentives to play the game, careful consideration of the AUPMR regulations would be necessary.

The AUPMR limits the provision of Premiums (as defined below) to players.

"Premiums" is defined in the AUPMR as any article, money, or other source of economic gain given as a means of inducing customers, irrespective of whether a direct or indirect system is employed, or whether a lottery system is used, by an entrepreneur to another party, in connection with a transaction involving goods or services supplied by the entrepreneur. The category of Premiums and the limits on provision of Premiums are as set out below.

For example, if the entrepreneur of a Blockchain Game provides an article or money to players in a campaign, such article or money could constitute Premiums, in which case provision thereof will be limited to the extent prescribed in the AUPMR. 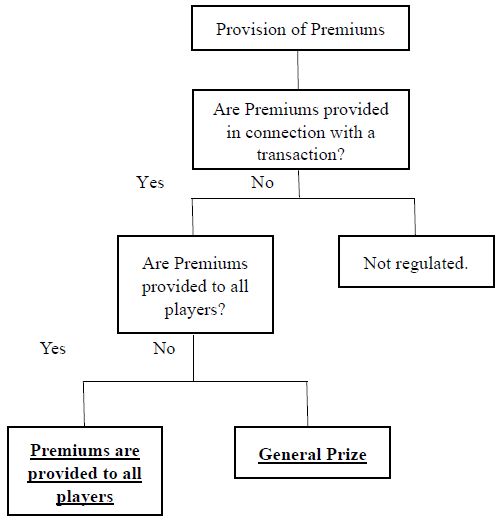 Limits on Premiums if Premiums are provided to all players

Limit on Premiums if a General Prize is provided