Spain: On The Rise? - Osborne Clarke 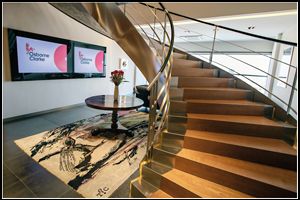 The profile of Osborne Clarke Spain is growing – the last year saw double-digit growth in revenue, lateral hires and the opening of a new office, but the political situation in Catalonia is causing concern at the Barcelona headquarters

Osborne Clarke is a firm that is making notable progress in the Spanish legal market. The revenue of the firm's Spanish offices grew by 13 per cent in the last year, largely driven by a buoyant M&A practice – notable instructions included advising Spanish healthcare company Grifols on the €1.7 billion acquisition of Hologic's blood screening business. Meanwhile, the firm also made a significant lateral hire in its Madrid office when it recruited Pérez-Llorca M&A partner Vicente Conde. In addition, the firm also took the step of opening an office in Zaragoza to complement its existing Barcelona and Madrid operations. It seems beyond question that the firm's profile has risen in Spain in the last 12 months – indeed, Osborne Clarke was placed 11th in the 2017 Iberian Lawyer brand ranking, which was published at the end of last year.

"Last year was a great year," says Osborne Clarke Spain managing partner Núria Martín. "M&A is strong and companies are investing in Spain, but while M&A is the biggest practice area, real estate is also very active." However, the firm's strong focus on tech businesses is also reaping dividends. "We are very focused on technology, including the digital health, mobile payments and retail technology sectors, but technology is becoming fundamental to all sectors," Martín says. "The US has a lot of technology companies that come to Europe – they go to the UK, France and Germany, as well as Spain." Martin says the firm has also been advising Spanish companies investing abroad, with the acquisition of companies in the US and Asia being one of the more prominent trends. In addition, the firm also has notable expertise in the pharmaceuticals sector. "We´re strong in pharmaceuticals and we effectively act as in-house lawyers for some clients." Martín says Osborne Clarke Spain does not disclose its revenue, but the total revenue of the firm's worldwide operations was €250 million last year. 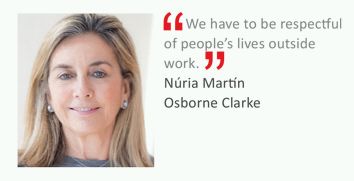 Inspiring leader
There are indications that Martín's leadership has played a fairly significant part in the firm's recent successes. She was recently named on the Iberian Lawyer InspiraLAw Top 50 Women List, an accolade that recognises the most inspiring women in the Spanish and Portuguese legal sectors, as selected by 500 of their peers. So, having been recognised as an inspiring leader, what is Martín's leadership philosophy? "We want the firm to be profitable, but we also want an excellent working environment," she says. "We want to provide a good service to clients, but we don´t want to lose focus, we don't want to fight on prices, if we can't do it at a certain price, we won´t do it at all."
Martín adds that, while a key objective is improving the firm's efficiency, it's also important to offer flexibility to lawyers. "With help, it's possible to have a family and a career," she says. "Unless you're working on a transaction that involves different jurisdictions (and different timezones), we don't want people staying long hours – we don´t want to see people working weekends, we want to see people leaving at 8pm or 8.30pm, otherwise they get stressed and disillusioned." Work-life balance is crucial, argues Martín. "We have to be respectful of people's lives outside work, we have to make them believe they can have a career and a family."

Empowering women
Ensuring diversity at the firm is another priority, according to Martín. "We have to reflect our clients and be adaptable in order to do business everywhere in the world," she says. However, this strategy can create difficulties, as Martín admits. "In an international structure, maintaining the culture is a challenge," she says. On the subject of diversity, empowering women lawyers is a major objective at Osborne Clarke, according to Martín. "We have an international female partners forum which aims to develop the skills of women lawyers," she says. "The aim is to support high potential women, help them into leadership positions, and speed up the promotion of women." It is worth mentioning at this point, that in the firms' Barcelona office – where Osborne Clarke Spain is headquartered – 60 per cent of the lawyers are female. "In the past, there were more male lawyers than female lawyers, but now, when we do interviews, the most talented lawyers we get are female."
Martín explains some of the issues women can face when trying to achieve a balance between their family life and professional life: "Often, at the start of our careers, we love our work and are passionate about it, but when we start having a family, we begin to have doubts about whether we should be devoted to our work or have a part-time job; it is not always easy to find a balance and we should be able to offer it." This is where the idea of flexibility comes in. "If you decide to always work part-time, it will be difficult to reach a leadership position and if you're working on a transaction, you can't control your hours, but we try to ensure that office meetings are held early in the day rather than at 8pm, for example," says Martín.

Catalonian question
Osborne Clarke Spain currently has 78 lawyers – of which 18 are partners – divided between its Barcelona, Madrid and Zaragoza offices. Barcelona, with 45 lawyers, is the biggest office, but the Madrid office – currently home to around 30 lawyers as well as being the base for the firm's banking and finance, public law and antitrust practices – is growing following the recent hire of Conde as well as another corporate lawyer at counsel level. The Zaragoza operation is much smaller in terms of headcount, but there are "plenty of interesting companies" in the city, according to Martín. "Zaragoza is a distribution hub, there are international companies there generating tax work, but the office is also referring work to our offices in Barcelona and Madrid – there are local companies that want to open subsidiaries in Italy, for example, as well as other European countries," she says.

Martín says she hopes that the political situation in Catalonia will not have an effect on the firm, but she acknowledges it is possible that business will be impacted. "It may have an impact, real estate transactions have slowed down considerably," she says. However, Martín adds that, with regard to M&A activity, the outlook is more positive. "There has been no change in M&A activity, investors are continuing with their plans, but if the situation is not resolved it may have an impact in the future." Indeed, some Barcelona-based lawyers express concerns that, while companies may simply be moving their domicile out of Catalonia at present, the knock-on effects could include companies' future personnel hires being made in Madrid or Valencia, rather than Barcelona.

Passion and dedication
Continuously innovating is one of the main challenges law firms face, Martín says. "We have a permanent innovation team, the focus is on clients, we design bespoke technology for clients and this is how we try to differentiate our firm from our competitors because the market is competitive," she says. Martín says that Osborne Clarke's strengths include the firm's "future-focus and in-depth industry knowledge". She adds: "We try to remain one step ahead and we try to anticipate problems - you need to continually change and move all the time. We have genuine sector speciality and we offer commercial and practical advice, as well as passion and dedication."