Ontex Group's remuneration report has been voted down by its shareholders for the fourth consecutive year. So, what is it about Ontex's CEO compensation strategy that rubs shareholders up the wrong way?

Ontex trades on the Belgium stock market and operates in the sector of disposable personal hygiene solutions for baby, feminine and adult care. It manufactures and sells its products throughout Western Europe, Eastern Europe, the Americas, and has a general global presence.

The following year would see the number increase to a 12% disapproval. By their 2017 Annual General Meeting, the majority (51%) of its shareholders voted against the report and the numbers have not dropped since. The highest number of votes against the remuneration report came at the recent 2020 general shareholders meeting with a resounding 64% of shareholders voting against, which is a 7% increase relative to their 2019 proxy season.

Ontex's Chairman and Member of the Remuneration Committee, Mr. Luc Missorten, resigned at the 2020 AGM and stated that:

CGLytics has taken Ontex's remuneration report voting outcomes from its governance data base, accessible in the market-leading platform, and analyzed the results from the past six years. The below graphical representation reveals how the voting outcomes have evolved.

The remuneration (through the lens of CEO pay)

Base salary surged to EUR 1 million in 2019. Previous years saw the fixed portion of CEO remuneration hover between the EUR 800K and 900K mark. This is despite a significant drop (62%) in the company's net income in 2019, and other Belgium company CEO's only seeing their base salary hover between EUR 700 and EUR 830K over the same period.

The updated remuneration plan also provided Ontex's CEO with the opportunity to earn an STI (annual bonus) pay-out of 150% of base salary. Both Ontex's CEO and country peer group average was relatively the same, fluctuating between EUR 550K and EUR 1.1 million over the period.

Our analysis revealed that Ontex's STI is not subject to any claw-back provision. The absence of such a provision prevents the company from retrieving funds already paid in the event of misconduct, poor performance, or a drop in company profits. The claw-back provision clause is widely used by other Belgium companies.

A review of Ontex's LTIs tells a rather different story. Where CEOs of Belgium listed companies earn, on average, EUR 650K to 1.4 million in long-term incentives, the LTI component of the Ontex's CEO, on the other hand, has not surpassed EUR 275K in pay-outs and is an indication of the company performance not being up to par relative to their peers on the BEL 20.

Further analysis revealed that Ontex has been underperforming on the BEL 20 Index over one, two, three and five-year periods, and since its initial listing in 2014. The poor performance has led to Euronext demoting Ontex from the BEL 20 (Large Cap) and including the company in the BEL Mid (Mid Cap), in addition, their second largest investor (ENA Investment Capital) called on the Board to take immediate action to create shareholder value[2][3].

According to our analysis, using CGLytics Executive Compensation tools found in the software solution, below is how Ontex CEO realized pay stacks up against its country peers.1 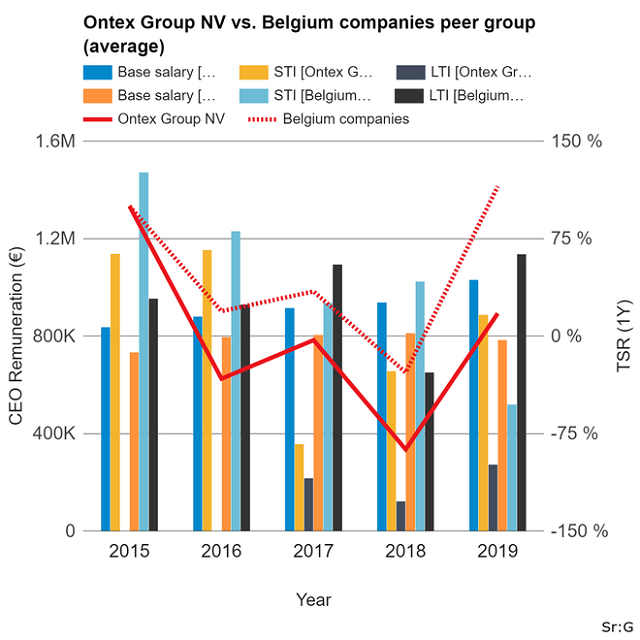 Upon analyzing the relative position of Ontex's CEO pay compared to performance (over three years), it was noticed that Ontex displays a misalignment in its remuneration practice relative to its Belgian peers. Specifically, our analysis indicates that Ontex has been overcompensating its CEO. The company performance (measured in TSR) ranks among the lowest, whereas its compensation (total realized pay) ranks at the 50th percentile. 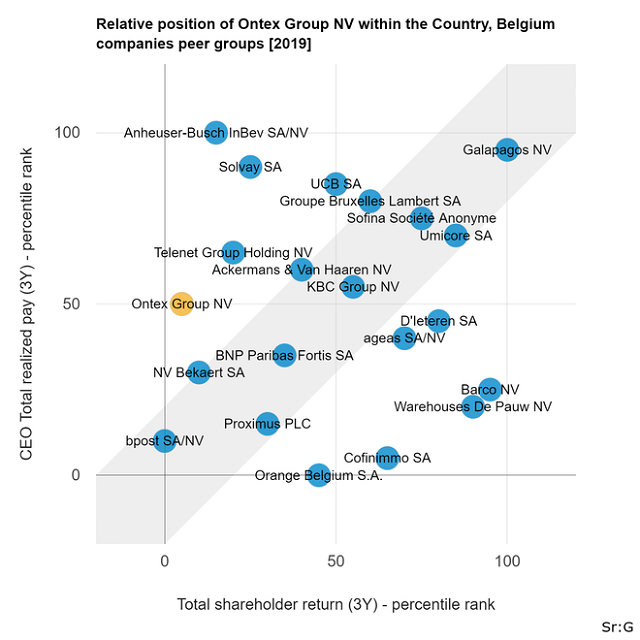 The persistent disapproval of Ontex's remuneration report by shareholders has prompted the company to take steps to enhance its remuneration policy, by making remuneration clearer and even more closely correlated with performance, according to the company Board of Directors. As to how the Board is planning on doing this, is yet to be known and seen.

Contact CGLytics and learn about the governance tools available and currently used by institutional investors, activist investors and leading proxy advisor Glass Lewis for recommendations in their proxy papers.

CGLytics provides access to 5,900 globally listed company profiles and their governance practices, including their CEO Pay for Performance, board composition, diversity, expertise, and skills.