Singapore: The Potential Impact Of The LMEshield Initiative On Base Metals Warehouse Financing Structures

Warehouse financing is a flexible financing option enabling borrowers to receive advances against inventory stored in warehouses. The structures followed enable borrowers to monetise their inventory during the storage phase to enable them to receive funds to invest in further supplies of goods, either for processing and/or onward sale to end buyers. In addition, financers are able to provide finance to borrowers with the benefit of being fully collateralised.

In a warehouse financing of metal, where the metal is not held in an LME warehouse1, typically a financer would seek to take security over the metal stored in the warehouse and/or the warehouse receipts representing the metal. The key priority for a financer is to ensure that it can create first ranking security, with a power of sale upon enforcement, so that the financer can quickly and easily enforce and sell the metal upon a default by the metal owner/borrower. This means that it is preferable to provide finance where both the borrower and the metal are located in jurisdictions with out-of-court enforcement regimes to avoid lengthy court proceedings and public auctions of the metal.

In many jurisdictions, security over metal and warehouse receipts must conform to local law requirements and, therefore, a financer must seek local law advice on creation of the security to ensure that the security interest is enforceable against the metal owner/ borrower. We have found that, in most jurisdictions, security over most goods is created by way of a possessory form of security which is, invariably, similar to an English law pledge or its equivalent under local law. Typically, in order to perfect the pledge, a financer needs possession of the goods secured by the pledge. Given that, absent an enforcement situation, a financer is unlikely to want physical possession of the goods, they will prefer to instead take 'constructive possession'2 of the goods. The financer may satisfy the requirement for constructive possession by the possession of warehouse receipts in jurisdictions where a warehouse receipt is, under the laws of that regime, treated as a document of title3. However, where the warehouse receipts are not documents of title, which is the case in most jurisdictions, having control over the goods may be a way of demonstrating possession. Whether this is sufficient to perfect the pledge will depend on the laws of the jurisdiction where the goods (and, therefore, the warehouse) are located.

How will this work in the context of an LMEshield warehouse?

The LME has recently introduced an electronic environment in which warehouse receipts are issued and immobilised. This involves a depository4 as well as an electronic register (the 'LMEshield system'). The depository is currently located in England and the terms under which the LMEshield system operates are governed by English law.

Where the metal to be financed is located in an LMEshield warehouse, parties to warehouse financing structures will need to revisit their familiarity and assumptions regarding the above methods for taking and perfecting security over metal stored in warehouses and over warehouse receipts. 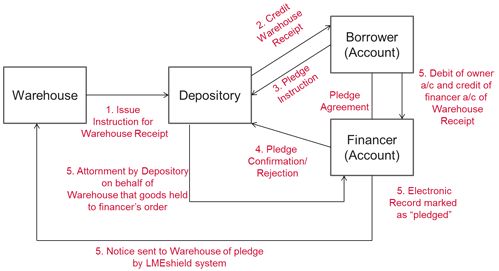 The 'pledged' flag will remain on the financer's account until the pledge is either enforced or released by the financer.

The LME states that it shall only add jurisdictions to its list of 'Eligible Jurisdictions' where legal opinions have been issued in respect of the operation of the system and the LME user terms in such jurisdictions. However, it is important to note that these opinions are not public and may not be relied upon by anyone other than the LME and, furthermore, the LME and the depository both exclude any liability for the lack of effectiveness of a security interest created using the LMEshield system.

Therefore, it is important that a financer seeks its own advice from counsel in the jurisdiction of the location of the assets and where the borrower is incorporated to ensure that the warehouse receipts issued by the depository, and the goods represented by the warehouse receipts, are capable of being effectively secured, and that the constructive possession purported by the LMEshield system validly perfects the security.

1.An approved warehouse that meets the criteria of the LME.

2. Where possession of a good can be afforded to an entity that has actual control over the goods without actually having physical possession of the same.

3. Depending on the treatment in the relevant jurisdiction, a warehouse receipt that is a document of title is generally a negotiable document, the possession of which gives the holder the sole right to control the release of goods from the warehouse and, by endorsement, to transfer ownership in the goods to a third party.

4. Currently, this is the LME.

ARTICLE TAGS
Singapore Energy and Natural Resources Energy Law
POPULAR ARTICLES ON: Energy and Natural Resources from Singapore
Energy Laws In India
Clarus Law Associates
The overarching legislative framework relating to the electricity sector in India is provided by the Electricity Act, 2003, which governs the generation, transmission, distribution and trading of electricity, ...
The Electricity (Amendment) Bill, 2020 – Key Highlights
BTG Legal
A proposal to amend the Electricity Act, 2003 ("Electricity Act") through the Electricity (Amendment) Bill, 2020 ("Amendment") was introduced by the Ministry of Power, Government of India...
Supreme Court Declares That Courts Cannot Interfere In Power Tariffs Determined By Expert Bodies
Phoenix Legal
Once an expert body has determined specific tariffs for power, it is not open to courts to interfere ordinarily in such matters, where the determination by such expert body does not suffer from any illegality or infirmity.
Future Of "Compensatory Tariff" In Light Of The Supreme Court Decision In Energy Watchdog v. CERC
Aquilaw
In the judgment delivered on April 11, 2017, on the issue of validity of ‘compensatory tariff', the Supreme Court has put an end to the unbalanced use of regulatory power, upheld the sanctity of contracts and ...
Regulation Of Group Captive Power Plants In India
Aquilaw
Captive Generating plant means a power plant set up by any person, association or any company to generate electricity primarily for his or her own use and includes a power plant set up by any co-operative society...
Renewable Energy Development In Kazakhstan
Unicase Law Firm
Overview on the strategic targets, large projects and further development of the legislation in the renewable energy sector.
FREE News Alerts
Sign Up for our free News Alerts - All the latest articles on your chosen topics condensed into a free bi-weekly email.
Register For News Alerts
Article Tags
Singapore Energy and Natural Resources Energy Law
Related Articles
Transition Financing – A Stocktake Of The Emerging ‘Regulatory' Landscape Shook Lin & Bok
Singapore Encourages Investment Toward Decarbonizing Shipping Jones Day
Transition Bonds: Financing For A Greener Shade Of Brown Shook Lin & Bok
An Overview Of The Carbon Pricing Regime In Singapore Shook Lin & Bok
Withers Khattarwong Advises First SGX-Listed Nickel Mining Company Withers LLP
Mondaq Webinars
Economic And Legal Issues In Data Privacy And Data Breach “Class Actions”
Cornerstone Research
Webinar London UK
Arbitration in India and Singapore: Practitioners’ Views
Advani & Co
Webinar Mumbai India
More Webinars
Comparative Guides
Blockchain
Data Privacy
Enforcement of Foreign Judgments
International Arbitration
Mondaq Advice Centres
Global
Trademarks in SAARC Countries
Global
Investment Immigration
More MACs
Upcoming Events
Mondaq Social Media