by Irina Lopatina
Eurofast
Your LinkedIn Connections
with the authors

Since 2003, Georgia has embarked on a journey of continuous reforms towards liberalization of the economy. As a result, in recent years Georgia's economy has been steadily growing. The country's most important economic sectors include agriculture, mining (manganese and copper) and manufacturing. In the past decade Georgia has also been heavily investing in energy independence by focusing on hydropower. The country also uses its key geographical location to become a logistics hub.

Currently, Georgia's economy has a good chance of exceeding an official 4 percent growth projection in 2017 thanks to private sector developments and the government spending on infrastructure projects.

Geostats, the National Statistics Office of Georgia, has published the following historic data on Georgian GDP as well as the outlook for 2017 first quarter. 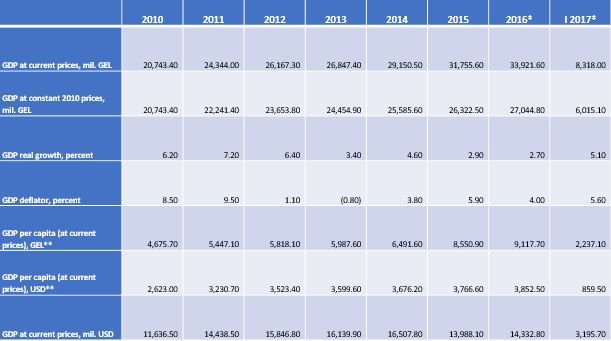 ARTICLE TAGS
Georgia Strategy Economic Analysis
POPULAR ARTICLES ON: Strategy from Georgia
More Light In The Dark? A First Analysis Of ESAs Q&A On The SFDR Delegated Regulation Published On 17 November 2022 For The Asset Management Industry
Herbert Smith Freehills
On 17 November 2022, the European Supervisory Authorities (ESAs) published a collection of questions and answers on Commission Delegated Regulation (EU) 2022/1288 (SFDR Delegated...
Sustainability vs. Inflation: 4 Game-Changing Trends
Innovation Park
As industries across the board grapple with rising costs, supply-chain issues, and economic uncertainty, sustainability goals have taken a back seat.
6 Tips To Help You Achieve The Perfect Target Operating Model Design
Vendigital
A strong TOM which aligns with your businesses goals is a great tool to ensure your business is moving in the right direction.
Walking A Tightrope: Retailers Grapple With Inflation, Debt And Dwindling Demand
Alvarez & Marsal
The UK economy has been severely impacted in recent months by rising interest rates, spikes in energy prices and falling consumer demand which has resulted in a marked economic slowdown.
European Commission Has Published The Revised Market Definition Notice
Nazali
The most notable change introduced by the draft is that it lays a higher focus on non-price factors of market definition, such as innovation and quality of products and services.
Complex Inquests: Procedure & Practice – The Rule Against Self-Incrimination (Video)
Gatehouse Chambers
In this Brew, Emma Zeb and Helena Drage discuss The Rule Against Self-Incrimination.
FREE News Alerts
Sign Up for our free News Alerts - All the latest articles on your chosen topics condensed into a free bi-weekly email.
Register For News Alerts
Article Tags
Georgia Strategy Economic Analysis
Related Articles
E-Residency Introduced In Georgia Eurofast
Mondaq Webinars
The New Swiss Data Protection Act - What You Need To Know
FABIAN PRIVACY LEGAL GmbH
Navigating the AI Legal Landscape
INQ Law
More Webinars
Mondaq Advice Centres
Global
Trademarks in SAARC Countries
More MACs
Upcoming Events
Mondaq Social Media