On March 8, 2021, International Women's Day, Ombudswoman Maria Stylianidou Lottides, the Commissioner for the Administration and Protection of Human Rights and Equality Agency (CAPHR), issued a landmark ruling which has made a major contribution to gender equality in the Republic and which was arguably one of the biggest steps in the empowerment of Cypriot women recorded since Cypriot women were granted the vote.

In 2019, a group of 60 female third and fourth class officers, seeking justice in a matter that has plagued them for over 30 years, launched a formal complaint to Lottides' office on the grounds of unequal treatment in the workplace based on gender.

Their complaint was that during their professional careers they had been the victims of endless injustice, unequal treatment and gender discrimination. This was partly due to the legal frameworks (some now abolished but some still existing) which regulated their careers. However, it was also partly due to the unfair practices of the state which acted to maintain and promote their unequal treatment.

Thirty years on from their initial recruitment, political upheaval, changing societal attitudes, and prominent voices on the world political stage demanding that women are treated equally and fairly, have encouraged these officers to seek justice in an issue that lies at the core of women's rights movements, equal pay and gender-impartiality in their career progression.

The discrimination in question, conducted by the defence ministry in the Cypriot National Guard, operated under a regime of Regulatory Administrative Acts designed to create a pattern of inequality and prejudice. During 1992-1994 there were announcements made for vacancies for permanent contracts of employment for which only male applicants of the Republic were eligible to apply. This requirement restricted female officers and gave an unfair advantage to their male colleagues who, in contrast to them, were allowed to be promoted.

Both Regulatory Administrative Act 91/1990 and Regulatory Administrative Act 311/1993, which covered the matters of appointments, promotion, seniority and pensions for army officers, entailed provisions of direct gender discrimination. One example of this was how vacant roles were announced. Roles eligible only for male officers, for whom previous experience is not a requirement, were published in the Gazette. In the case of female officers, it was at the discretion of the minister and chief of the Cypriot National Guard to decide the number of vacancies eligible for women, based on the remainder of published job vacancies. Additionally, the direct appointment of female non-commissioned officers, which also required a completed service of two years in the position of Volunteer Non-Commissioned Officer, when the Regulatory Administrative Act 89/1996 came in force, was extended to six years of previous service. There were no such conditions made for the appointment of male non-commissioned officers. 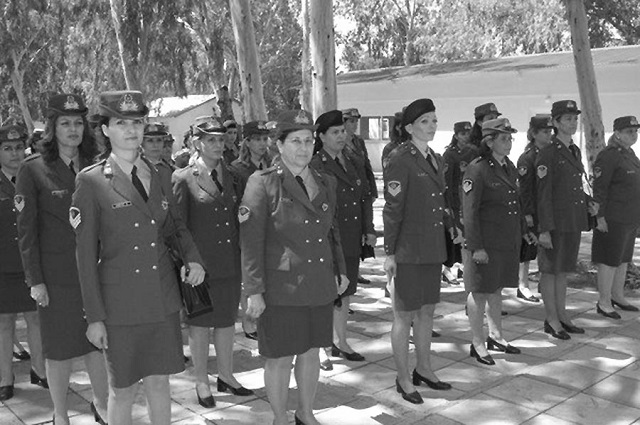 It is noteworthy that the above rules embody the majority of the grounds of defence put forward by the defence ministry.

Given the above, many people might wonder about the role of the state and the judiciary in preventing such rules and policies from taking effect and consequently, in averting injustices such as this. The most significant mechanism is Article 28 of the Republic's Constitution and alongside it, Article 21 and Articles 23 of the EU Charter of Fundamental Rights (the 'ECHR'). The Constitution explicitly guards the principle that all are equal before the law, government, and justice and that all have the right to be protected and be treated as equal. In addition, Article 28 provides that every person is entitled to the same rights and freedoms stipulated within the Constitution, free of any discrimination (direct or indirect) against a person based on, amongst other qualities and attributes, its gender. Lastly, Article 21 of the ECHR forbids any discrimination especially based on gender, whilst Article 23 determines that equality between men and women must be guarded in all areas of life, including employment, work and pay.

In 2002, a national law, the "Equal Treatment of Men and Women in Employment and Professional Qualification Law", came in force. This law represented the adoption of Regulation 2006/54/EC and in Article 3 that stipulates the equal treatment of both genders, not only regarding access to employment, but also with regard to equal treatment in the conditions of employment, including career progression. Article 2 of the law also defines equal treatment as the absence of any discrimination based on gender, both direct or indirect, and especially on marital and family status. Last but not least, Article 8 prohibits any manner of direct or indirect discrimination in matters of promotion and permanency in a job role, through establishment and application of terms and conditions, skills and other attributes, conditions and other criteria during the employment.

The doctrine of the rule of law and the ECHR allowed these women to seek justice.

These steps of applying extensive pressure have finally made some concrete progress in righting the wrongs suffered by the female officers of the third class. In June 2020, they were promoted to the position of senior sergeant and on March 7, 2021 they were joined by their colleagues from the fourth class.

The windmills may not have been giants but we believe that there will always be a Don Quixote to fight the good fight. And, as that story ends with the heroes bringing justice in ours, CAPHR has recognised the truth of these female officers' situation by stating that "the injustice suffered by those involved without any action taken in revoking this timeless inequality between women and men, is not enough for wishful thinking and manifestos as March 8 approaches, but it (the spirit of such day) demands from our society decisive contribution in the rectification and eradication of such notions".

In view of this, whilst the promotions belatedly given are welcome, they do not constitute a complete restoration of the careers of these people or an end to this action. Whilst we salute our compatriots for their groundbreaking work to date more can be done.