During the last five years the Cypriot Alternative Investment Fund (AIF) landscape has significantly changed and modernised. In the last year the Cypriot fund industry has seen steady growth (see table 1 below) and, with the expansion of the possible fund structures available in Cyprus, it's anticipated that this figure will grow even further by Q1 2019.

Along with the increased number of funds in Cyprus, we've seen the rise in the number of registered and authorised Alternative Investment Fund Managers ("AIFM"). The Cyprus government and industry professionals have been discussing the current legislative framework and there are several legislative changes in the pipeline.

The Cyprus Sovereign rating has climbed to a BBB- with a stable outlook as of the 14th of September (S&P) and ranks 53rd in the World Bank's 'Doing Business 2017' report. Cyprus was also amongst top five Eurozone Performers in 2017 with a growth rate of 3.9%.

Historic development of the legislative landscape

2014 marked the year where the Law 131(I)/2014 on AIFs was passed by the Cyprus Parliament. The legislation promised to deliver the possibility to set-up a collective investment vehicle which would be less regulated than a UCITS and able to rival the existing status quo.

Cyprus managed to pass legislation that was relatively impractical and less competitive. Most cases were stuck at the regulators desk for a period of 8-12 months prior to the fund receiving approval to market its units. Since 2014, the government and industry professionals have worked out a solution towards cutting out unnecessary time delays and making a true collective investment vehicle available, which can be marketed to retail, sophisticated or well-informed investors.

With the passing of Law 124(i)/2018, which introduced the Registered Alternative Investment Fund (RAIF) (see below) and other positive amendments, we expect Cyprus' assets under management ("AUM") to increase in the months to come. At the moment AUM has reached EUR4,7B in Q2 2018 representing a year on year growth of 70%. Significant increase to the real estate type of assets was noticed with a year on year growth of almost 65%. Shares and real estate represent almost 50% of the entire asset pool of funds in Cyprus with EUR4,2B being held by open ended funds whereas close ended funds only hold EUR0,4B of current AUM. 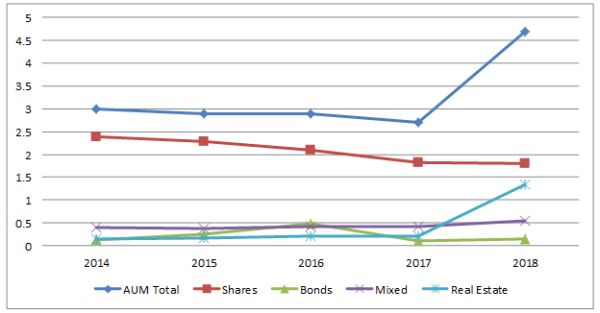 A Common Fund, a Variable Capital Company, a Fixed Capital Company and a Limited Partnership (LP) may be used to form an AIF under Cyprus Law. An LP provides more diversity than the other structures as it may be set-up with or without legal personality. Under Cyprus law, all other structures are treated as having separate legal personality to its managers and shareholders. To a large extend several of the provisions resulting from the Companies Law, or the Partnership Law of Cyprus are adopted as applicable, as the case may be.

Table 2 below marks the main differences between the AIF, AIFLNP and the RAIF. The RAIF is the newest addition to Cyprus fund structures. It's intended to be versatile, quick to set-up and subject to the supervision of an AIFM, custodian and its internal managers, directors etc.

Eligibility and number of investors

The AIF is the only structure eligible to retail investors whereas the AIFLNP and the RAIF can only be marketed to professional1 and/or well informed investors. With the exception of the AIFLNP, which is set-up for no more than 50 investors, both the Cypriot AIF and the RAIF may have an unlimited number of investors.

The Cypriot AIF and RAIF structure must, within 12 months from the date of receiving a license as an AIF, have AUM amounting to at leastEUR500.000 where funds have been provided by investors. For the Cypriot AIFLNP this amount is reduced to EUR250.000.

Depending on the AIF type then the total value and leverage of the fund is restricted. In those cases where an AIFM is appointed the Cypriot legislation does not impose any restriction. Whereas in self-managed AIFs this is restricted to the maximum permitted values under the AIFM Directive2.

With the exception of the AIFLNP, the AIF and the RAIF are required to appoint a custodian for the safekeeping of tradeable securities and the funds' assets. Such custodian must comply with the provision of the Law 131(I)/2014 on Alternative Investment Funds (the "AIF Law"), Law 56(I)/2013 on Alternative Investment Fund Managers transposing Directive 2011/61/EU of the European Parliament (the "AIFM Law") and the Commission Delegated Regulation No. 231/2013 of 19 December 2012. This is directly applicable in Cyprus including, where the context so requires, any delegated acts and implementing legislation made which applies in Cyprus ("AIFM Regulation").

More specifically the custodian bank will operate the cash account and conduct cash monitoring. In respect to safekeeping of financial instruments held in custody, the financial instruments will be held in the name of the depositary in a designated bank account. The custodian will settle and perform the clearing, safekeeping and reporting. For non-financial assets the depositary is required to verify the ownership of the assets and shall maintain a record of them.

Apart from the safekeeping duties of the custodian, the custodian is required to perform oversight over the dealing of the Cypriot fund and will review documents for the sale, issue, re-purchase, redemption and cancellation of any units of the fund. They will also review the net assets valuation calculations to ensure conformity with the relevant laws and the fund's articles. Any income generated by the fund must be applied as per the articles and the relevant laws.

As previously mentioned, depending on the legal form chosen, the AIF will either have legal personality or not. In the instance that the AIF doesn't have legal personality then it's treated as tax transparent for the purposes of Cyprus income tax law. Nevertheless a partnership is obligated to maintain books and records in accordance to IAS and prepare financial statements in accordance to IFRS.

A fund which is tax resident in Cyprus will be taxed on income accruing or arising from sources both within and outside Cyprus. Tax residency is assessed subject to the location of its management and control. The corporate income tax rate in Cyprus is currently set at 12.5%. There are some exemptions from income including:

There are also some deductible expenses including

The Fund may carry forward, for tax purposes, any losses realised for the next five years and any tax paid outside of Cyprus is eligible for a tax credit in Cyprus irrespective of whether a treaty is in place.

Cyprus has an attractive tax regime for funds. More specifically, if an employee is remunerated more than EUR100.000 per year a 50% tax exception on their earned income applies. By using the Cypriot non-domicile regime any investment income (dividends, interest) is exempt from taxation.

Carried interest has received a special mode of taxation as of 2018. The rate of tax applicable to carried interest is reduced to 8% from 12.5% with a minimum tax payable per year at EUR10.000.

As of 2018 the investment in an AIF, RAIF or partnership is excluded from the creation of a permanent establishment. The effect of this amendment is to ensure that the Republic of Cyprus does not tax any proceeds from investments but rather only the country of tax residency of the investor.

The Cypriot regulatory environment, being a member of the European Union, combined with Cyprus' geographical location at the crossroad of three continents, is attracting investment fund promoters offering unique investment opportunities and specialised expertise. Closely associated with the Central and Eastern European region the Middle East, India and Asia, a Cypriot RAIF can perform very well with EU and none-EU investors or in the instance that EU wide investments will be carried out.