Worldwide: The Impact Of Industrial Nations On Global Tax Evasion

Are we doing something wrong in this world when it comes to fighting tax evasion? Obviously, yes!

While OECD, G20 and EU are not getting tired of stretching out their fingers on offshore countries, some of their own countries do have the largest impact on global tax evasion themselves. Therefore; if we want to fight tax evasion and tax injustice effectively, those who shout loudest should look into a mirror and start correcting themselves.

Legal loopholes, inefficient due diligence, financial secrecy and poor reporting are just some of the reasons that make the life of tax evaders more comfortable. The EU recently published a list of non-cooperative jurisdictions for tax purposes, consisting of the following countries in alphabetical order:

It is not quite clear which objective criteria led to the inclusion of these countries in this list.

Impact is more important than the cause only

Countries like the Marshall Islands, Trinidad & Tobago, or Belize, the Bahamas and the Cayman Islands are among the known classical countries that provided and provide legislation that makes tax evasion quite easy. Thus, those countries, among others, were and are always the main target of OECD, G20 and EU member countries in their efforts to fight tax evasion and to establish tax justice.

However, do those (offshore) countries really have a substantial impact on global tax evasion and tax injustice?

The Tax Justice Network, an independent international network launched in 2003 and dedicated to high-level research, analysis and advocacy in the area of international tax and the international aspects of financial regulation, takes a different approach.

In its researches and analyses, the Tax Justice Network focuses not only on (harmful) financial secrecy, but on its impact on the global economy and on global tax losses as well.

Recently published research and analysis results of the Tax Justice Network are teaching us that we should review our efforts to stop tax evasion thoroughly and that we have to redefine our geographical targets and goals to fight tax evasion efficiently. 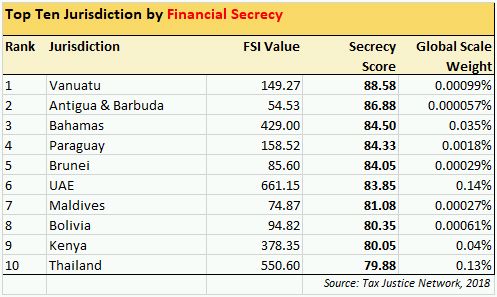 However, the sum of Global Scale Weight of these ten countries together is merely 0,35%. The Global Scale Weight defines how big a financial centre (country) is, in terms of financial services provided to non-residents. Thus, the many tax haven lists mean little in global terms, as these lists focus on focus on secrecy or on tax rates. Even if OECD, G20 and the EU would achieve full transparency of the countries listed on tax haven lists, the global impact on effective tax evasion would be negligible. We could not say that world really became more transparent. 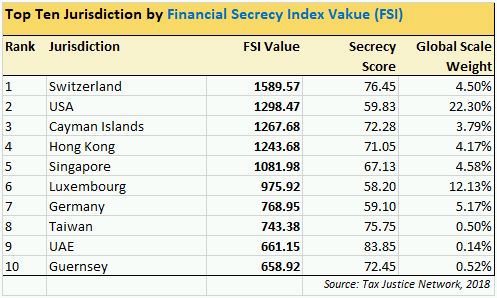 As the above table shows, a number of countries that shout loudest when it comes to fight tax evasion actually have the largest impact on global tax evasion: the USA, Luxembourg, Germany; and we should name the United Kingdom and France as well, because they are on rank 23 and 25 if the global FSI ranking.

If we sort the countries by the Global Scale of Weight, in terms of financial services provided to non-residents, the picture becomes even more dramatical: 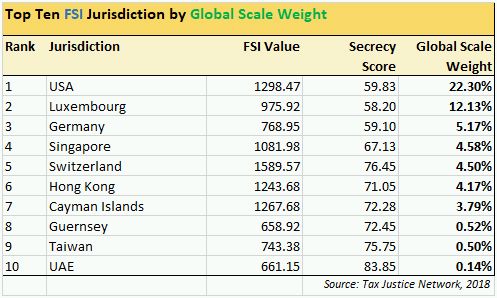 An interactive (sortable) table of all 112 jurisdictions can be seen on the website of the Tax Justice Network.

Measures of OECD, G20 and the EU must target countries with large global impact on damage through tax evasion.

But that will hardly happen, as the bosses of OECD, G20 and the EU will not really target themselves.

Shanda Consult provides sound and resilient advisory services regarding the right choice of jurisdiction for the place of business, considering factors of ecosystems, market aspects, various tax advantages, among others.