by Ralph Thiede
Allgemeines Treuunternehmen
To print this article, all you need is to be registered or login on Mondaq.com.

With effect on 1 January 2011, Liechtenstein has introduced the new Tax Law. It will modernise the present legal order, consider current international developments, and make it compliant with the European requirements.

What can Liechtenstein offer to national or international corporate taxpayers? A lot! Enticing incentives make Liechtenstein one of the most attractive holding regimes within Europe:

How Corporate Taxpayers can use Liechtenstein tax incentives for their tax planning in future?

Liechtenstein has still no access to the European Parent-Subsidiary and Interest & Royalties Directives. However, the country entered into a DTT with Luxembourg which is in force since 17 December 2010. It grants under certain (in comparison to the OECD Model Convention better) conditions WHT free dividend payments, for instance from a Luxembourg Sub-holding entity to a Liechtenstein Top-holding entity: 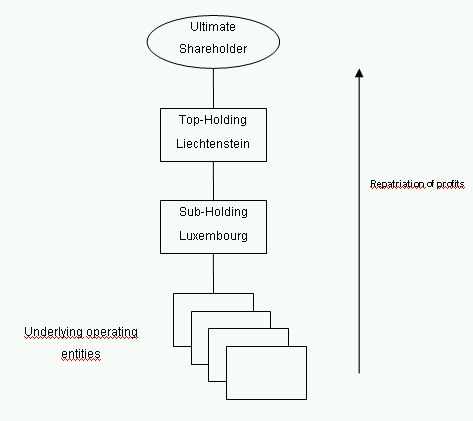 If properly structured, repatriation of profits from the underlying businesses to the ultimate shareholder can be granted even WHT free throughout the lifetime of the structure.

Foreign taxpayers may benefit from a reduced tax on income from intangible rights. According to the new Tax Law, 80% of such income can be deducted as notional expense in favour of the intangible property holder. Provided that such payments will be structured via a Company domiciled in Liechtenstein, the effective tax rate can be decreased down to 2.5%. In practice, royalties are very often suffering from foreign WHT which can be claimed only by means of an applicable DTT.

In order to preserve the tax benefit, one might consider again a structure including Luxembourg as a sub-holding entity having the position to claim back WHT on royalty income, this on the basis of an extensive worldwide treaty network. At the same time, Luxembourg is offering a similar 80% notional deduction on royalty or license income.

If properly structured, the whole royalty stream can be routed to the ultimate shareholder with an overall tax charge of best case less than 8%: 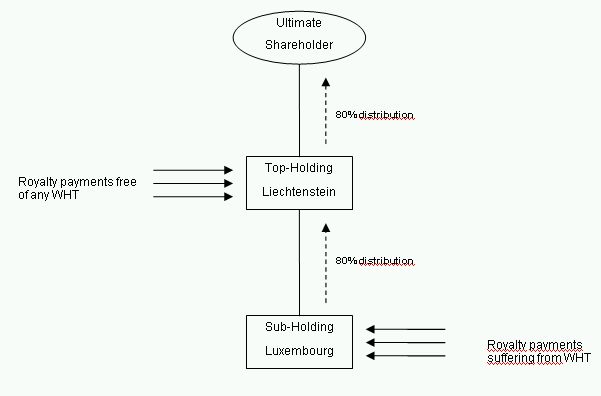 Relocation of "effective place of management"

Alternatively, one might consider the registration of a Liechtenstein entity for corporate income tax and/or WHT purposes abroad, preferably in a country having access to competitive and efficient tax regimes. In practice familiar is the relocation of the effective place of management abroad. The company will become tax resident abroad whereas the legal domicile (and the service providers) in Liechtenstein will remain.

As an alternative instrument for saving WHT on profit streams, operational business abroad (production, trade, finance or other service activities) can be implemented legally and fiscally as a branch / permanent establishment (PE). Compared to a legally stand-alone company, a PE is basically not subject to WHT. Liechtenstein does fully exempt foreign PE income from domestic taxes.

According to Swiss Tax Law, dividend payments (or retained profits) of a Swiss based company are subject to 35% WHT. According to the current DTT with Switzerland, a Liechtenstein parent entity is not entitled to claim back Swiss WHT which becomes therefore final. If the Swiss operations now would be legally implemented as a (foreign) branch of the Liechtenstein (headquarter) company, Swiss WHT can best case be fully eliminated, under certain conditions.

Further advantage: for Liechtenstein tax purposes, there is no requirement to register the tax branch at the local Register of Commerce.

The so-called «notional interest deduction» is a powerful measure in international tax law enabling all companies subject to Liechtenstein tax to deduct from their taxable income a «notional» interest calculated on the basis of their (adjusted) shareholder's equity.

Main purpose is to reduce tax discrimination between debt and equity financing, and it works very similar to the Belgium which has introduced the system as of tax year 2007.

How does it work? The amount that can be deducted from the taxable base equals to the notional interest cost on the adjusted equity, or simply:

Compared to Belgium, both the ordinary tax rate as well as the notional interest rate is lower. If well and properly structured, a Liechtenstein taxpayer may achieve an income tax burden tending to be zero.

Business owners in CEE structure their investments traditionally via a Cyprus based holding company. Long standing DTTs, for instance with Ukraine or Russia, grant tax efficient repatriation via Cyprus to the ultimate shareholder.

Under the new tax regime, tax efficient repatriation can be enhanced through a Liechtenstein top entity, entirely complying with European tax requirements and combining the advantages Liechtenstein can offer by tradition. 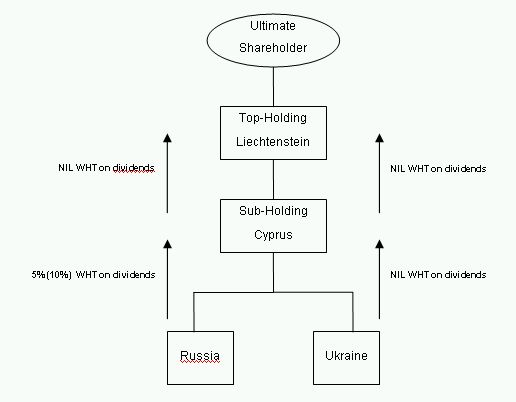