The Fair Competition Commission (FCC) is seeking to impose the maximum penalty (10% of combined annual turnover) against five local parties for allegedly implementing a merger without prior notification to, and approval from, the FCC.

The FCC alleges that various transaction steps leading to the transformation of Simba Sports Club (SSC) from a sports club (registered under the National Sports Council Act, 1967) to a company (registered in terms of the Companies Act, 2002) resulted in a change of control over SSC, thereby constituting a merger for purposes of the Fair Competition Act, 2003 (FCA), and that the financial thresholds for mandatory notification were met based on the asset value of SSC alone.

The transaction took place in or around 2018 and, according to the FCC, had been fully implemented in the same year.

The FCC completed its preliminary investigation into the matter which, the FCC alleges, revealed that prior to the merger, SSC was owned as to 100% by its club members, with a board of trustees responsible for oversight of its affairs.

It is alleged that in terms of the transaction, a new company was incorporated, namely, Simba Sports Club Company Ltd (SSCL), which acquired the goodwill and other business assets of SSC. SSCL, in turn, was owned by Simba Sports Club Holding Company Ltd (SSCHCL) as to 51% and MO Simba Company Ltd (MO) as to the remaining 49%. Both were also newly incorporated at the time, as investment holding firms, and the FCC alleges that both these firms established themselves as controllers over SSCL. SSCHCL is, in turn, owned by certain former trustees of the SSC board (Trustees) and MO is controlled by an individual unrelated to the Trustees. The post-transaction structure is depicted below. 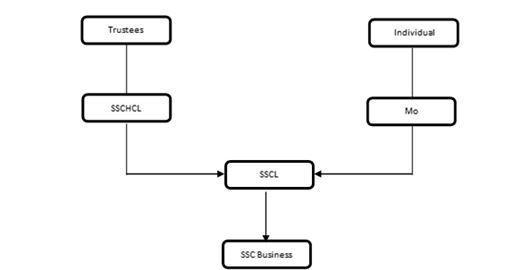 In terms of the FCA, read with the Finance Act, 2020, parties who implement a merger without having obtained approval from the FCC run the risk of attracting an administrative penalty of between 5% and 10% of their combined annual turnover which has a source in mainland Tanzania. The FCC in this case appears to take the view that the maximum penalty of 10% is warranted on the basis of the following factors:

Nature and extent of the violation: While the merger was not one which would have been prohibited, prior implementation of a notifiable merger without FCC approval is a serious offence.

Degree of harassment: While the merging firms did not harass any FCC staff, they did, in the opinion of the FCC, make derogatory remarks about the FCC in the public domain, bordering on harassment.

Repetitive nature: While the conduct was a one-off incident, the merger was implemented some two and a half years ago and its effects are continuing in the market.

Ultimately, the FCC proposes a cumulative penalty of TZS 326 510 251.50 (c. ZAR 2.1 million / USD 140 000 / EUR 115 000) be levied against the merging firms. The FCC has invited the merging firms to either defend themselves against the FCC's preliminary findings or enter into settlement discussions with the FCC.

This matter will likely deal with topical issues as it proceeds to finality before the FCC and, potentially, the Fair Competition Tribunal. Among other things, we will watch with interest to see whether clearer guidance will be offered on the definition of a 'merger' under the FCA and what constitutes a 'change of control' for purposes of merger control in Tanzania – something which is usually a point of significant controversy.