by David Harrison
Mayer Brown
Your LinkedIn Connections
with the authors

Indeed, Vietnam's securities markets have come a long way since World Trade Organization accession in 2007 – or have they?

To date, only a handful of companies in which foreign investors hold 51 per cent or more of its charter capital, or subsidiaries of such entities, have successfully listed on the HSX or HNX as there is no clear path for them to do so.

Facilitating the listing of foreign-invested enterprises (FIEs) would further improve the liquidity of the two exchanges, provide international credibility and recognition of the progress made by the two major Vietnamese bourses, encourage such investors to make a long term commitment in Vietnam, and solidify the country's standing as a market alternative to China for foreign direct investment in East Asia.

We track the incremental evolution of relevant legal documents which sets out listing rules and regulations (see graphic).

Although there has been incremental progress in easing the restrictions for foreign investors with respect to their general investments in Vietnam, there has not been a corresponding increase in the number of FIEs listing on the stock exchange which would provide these enterprises with increased liquidity and enhanced onshore capital raising options.

It should be noted that this contains a list of over 244 conditional business lines covering banking and finance, real estate, public health, natural resources, national security, press and publishing, and more.

Even where a foreign entity desires to purchase shares in an existing listed company, the State Securities Commission (SSC) has advised that listed multi-sector companies should try to keep foreign stakes at their current level until the list of conditional business and investment sectors under Decree 60 is issued.

The result of this is uncertainty among foreign investors as to their ability to acquire public companies or otherwise list on either HSX and HNX . By April last year, two years after the passing of Decree 60, only 20 out of 700 firms trading on the two bourses had abandoned the 49 per cent FOL.

The Vietnamese government has recognised that the current foreign investment regime remains disconnected and disproportionate, and in August the Politburo issued Resolution No.50-NQ/TW, the first decision on FDI which sets out a blueprint for mechanisms and policies to make Vietnam more competitive and attract more foreign investment by the year 2030.

Resolution 50 sets out the targets for 2030 which include increasing the registered capital from $30-$40 billion per annum from 2021-2025 to $40-$50 billion per annum from 2026-2030; and increasing the localisation ratio from 30 per cent in 2025 to 40 per cent in 2030. Resolution 50 also underpins the government's desire to attract investment which emphasises sustainable development, employs modern technology, and which promotes good corporate governance.

Resolution 50 identifies factors for Vietnam to achieve key performance indicators, namely reform of legal policy and the development of human development and infrastructure. We can outline proposed legal reforms aimed at attracting FDI to the HSX or HNX.

A proposed first step would be easing foreign ownership restrictions including restrictions on foreign investors' ability to acquire newly-issued shares in listed entities or to list all shares (not just publicly offered ones). It is expected though that the government would look to balance interests by including national security and defence caveats. Certain sensitive sectors, such as banking and insurance, would retain regulatory supervision.

Also critical from a foreign investor's perspective is consolidation of the current regulations relating to overseas investment which would reduce the risk of misinterpretation or misapplication of relevant laws by such an investor. For instance, there is no definition of "Foreign-invested companies" in Vietnam's securities-related laws and the definition proposed in this article tracks to the Law on Investment. Providing official translations of relevant regulations also helps prevent misinterpretations. 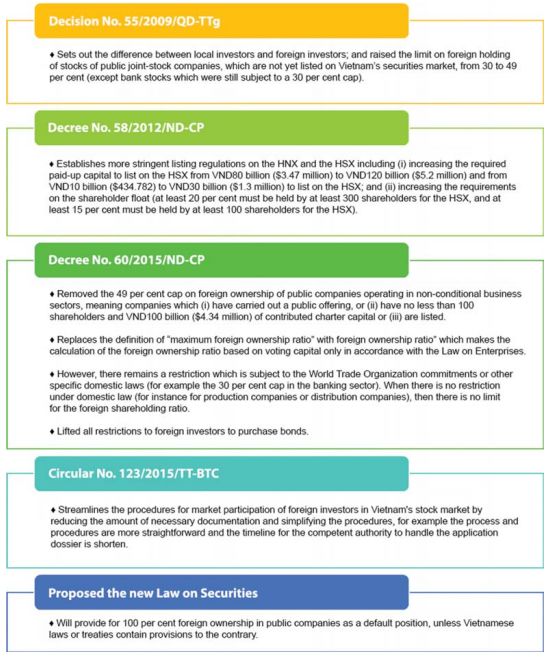 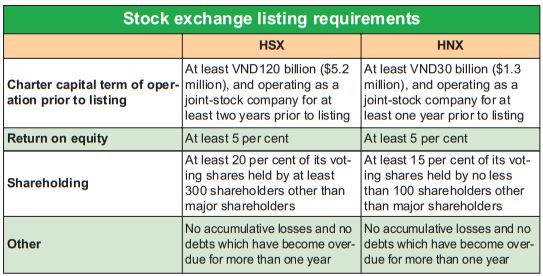 In addition, clear and detailed processes for listing, and calculating foreign ownership thresholds will be essential to close loopholes that permit discretionary waivers. This also provides foreign investors comfort that these loopholes will not be used to affect the most-favoured nation rule of international engagement for any reason, and will provide for consistent and reliable dispute resolution.

Any overhaul of regulations should also look at ensuring that listing regulations and procedures are flexible and competitive enough to allow startups, fintech companies, and tech firms to raise capital registration procedures on both HSX and HNX, in keeping with the Politburo's emphasis on attracting companies that use progressive technology.

The reform of stock exchange regulations aimed at foreign investors should not contain too many regulatory obstacles as this can influence an investors decision to list in a particular jurisdiction. They should also be flexible enough to accommodate the changing needs of businesses.

The inflexibility of the Hong Kong Stock Exchange to accommodate Alibaba's proposed partnership structure or the listing of dual shares reportedly led to Alibaba's choice to list on the New York Stock Exchange instead of Hong Kong, which was thought to be more favourable because of its geographical and cultural nexus to China, which generates the majority of the company's revenues.

The Hong Kong Stock Exchange subsequently changed its rules in 2018 to permit listings of high-growth and innovative companies with dual-class shares or "weighted voting rights" structures.

There are currently a limited number of products on the HSX and HNX which provided limited options for foreign investors. New products such as non-voting depository receipts which were initially introduced in 2013, and subsequently disallowed by the SSC in 2015, and covered warrants which were introduced by the HSX in June can facilitate the accessibility to Vietnam's capital market for international investors, and improve liquidity for the markets.

The key elements of an effective regulatory framework for FDI include a body of clear laws and regulations, and the efficient administrative bodies. Therefore, any reform envisioned by Resolution 50 should also extend to several points.

The first is a review of tax systems to simplify them for foreign investors. The second is providing fair access to dispute resolution mechanisms. Finally, it should ensure efficient administration and enforcement of the regulations.n