by Linda Jiang
Kangxin
Your LinkedIn Connections
with the authors
To print this article, all you need is to be registered or login on Mondaq.com.

We, Kangxin Partners, P.C., filed an opposition action against the trademark,

(No.35668065 in Class 25) ("the opposed mark") on behalf of THE ARSENAL FOOTBALL CLUB PUBLIC LIMITED COMPANY ("Client") on May 20, 2020.  The National Intellectual Property Administration, PRC ("CNIPA") examined the case and decided to  rejected the opposed mark for registration.

THE ARSENAL FOOTBALL CLUB PUBLIC LIMITED COMPANY is the famous football club, it is also the owner of the brand "ARSENAL." After more than 100 years hard work, ARSENAL football club made a great performance.  It has been the one of most famous and oldest football club in the world, and it is well-known as "GUNNERS".  Thus, the client and the mark "GUNNERS" enjoy high reputation among relevant public. The client registered the trademark "GUNNERS" in China over different goods. The client was of the opinion that the opposed mark is a "similar mark over similar goods" with the client's mark

" under international registration No.1230152.  Upon communication with client, we were entrusted to file opposition against this trademark.

The comparison of the marks is as below: 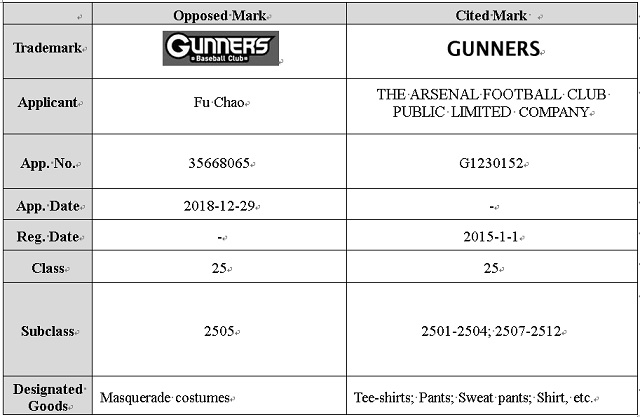 In the opposition, we mainly argued that:

1) The opposed mark is "similar marks over similar goods" with compared to cited mark, in violation of Article 30 of the PRC Trademark Law;

2) Based on the high reputation of the cited mark, the registration and use of the opposed mark over similar same or similar goods will easily cause confusion among relevant public;

3) The registration of the opposed mark is deceptive, it will mislead the consumers on the quality, origin of the goods;

4) The opposed mark was filed in bad-faith, which violates the principle of good faith.

On May 19, 2021, the CNIPA issued the decision: The distinctive part of the opposed mark "GUNNERS" is similar to the opponent's cited mark for "

in respect of letter composition, pronunciation and meaning, and the goods of both sides are similar in respect of functions and use purposes.  Thus, the marks are similar marks over similar goods, and coexistence of the marks may cause confusion and misleading to consumers.  Therefore, the opposed mark is in violation of Article 30 of Chinese Trademark Law.

Key Point of the Case

With respect to issue 1, the opposed mark is highly similar to the cited mark, because they share the distinctive word "GUNNERS"; although the opposed mark also contains the words "BASEBALL CLUB", it bears weak distinctness when used over the goods in Class 25.  In addition, the client is the famous football club, thus, the existence of the words "BASEBALL CLUB" in the opposed mark makes it more similar to the cited mark, so the coexistence of the marks will easily cause confusion among relevant public.

With respect to issue 2, although the goods of the opposed mark are not similar to those of the cited mark in accordance with the Chinese Classification of Goods and Services as they are in different subclasses, we argued from the nature and characteristics of the goods, emphasized that the goods are closely related in respect to function, use purpose, manufacturing department, sales channel and target consumers, because both of the opposed designated goods "Masquerade costumes" and the cited mark's goods "Tee-shirts; Pants; Sweat pants; Shirt, etc." are clothing.  We also illustrated that when consumers purchase products, they will purchase goods with good quality; since the client's mark enjoys high reputation and the goods are excellent, consumer is more likely to purchase the opposed mark's goods by mistakenly think that there are certain connection with the parties' marks.  Moreover, as an international big company likes the client, it is quite reasonable to have several products lines, so the consumers may easily think that the opposed mark and its goods are one of the client's brand and products lines, so it is easy for them to confuse the origin of the goods.   Therefore, the opposed mark's goods should be considered similar to the goods of the cited mark.

ARTICLE TAGS
China Intellectual Property Trademark
POPULAR ARTICLES ON: Intellectual Property from China
Patent Law in India
Anand & Anand
The Patents Act 1970, along with the Patents Rules 1972, came into force on 20th April 1972, replacing the Indian Patents and Designs Act 1911. The Patents Act was largely based on the recommendations of the Ayyangar Committee Report headed by Justice N. Rajagopala Ayyangar. One of the recommendations was the allowance of only process patents with regard to inventions relating to drugs, medicines, food and chemicals.
Assignment And Licensing Of Copyright
Singh & Associates
Copyright is a protection given to the creators of certain types of works as an acknowledgment to their intellectual input
New Aussie Domain Name
Davies Collison Cave
A new Australian domain name, .au will be available from 24 March 2022. Australian individuals, businesses, and organisations will be able to register their existing and new domain names in the .au domain name space...
Patent Specification - Where The Rubber Meets The Road
Singh & Associates
In order to obtain a patent, an applicant must fully and particularly describe the invention therein claimed in a complete specification.
Compulsory Licensing In India
Khurana and Khurana
WIPO defines patent as an exclusive right granted for an invention, which is a product or a process that provides, in general, a new way of doing something, or offers a new technical solution to a problem
What Can Be Patented In India?
Intepat IP Services Pvt Ltd
Sections 3 and 4 of the Indian Patents Act, 1970 specifically state exclusions to what can be patented in India.
FREE News Alerts
Sign Up for our free News Alerts - All the latest articles on your chosen topics condensed into a free bi-weekly email.
Register For News Alerts
Article Tags
China Intellectual Property Trademark
Related Articles
Trademark MOCCA Cancelled As Generic Name In China Chofn Intellectual Property
江蘇徐州市、商標関連知財民事事件の訴訟調停連携体制を確立 Kangxin
GossIP – November, 2021, HFG Law&Intellectual Property Newsletter HFG Law & Intellectual Property
深セン検察院、「知的財産権刑事法律保護活動白書」を発表 Kangxin
被称为"宝藏"的商标查询功能，究竟有多强大？ Kangxin
Mondaq Webinars
Future Series: Oh Canada! Key Legal Issues for International Companies
Borden Ladner Gervais LLP
Webinar Toronto Canada
Employment in The Netherlands – Significant Challenges That Lie Ahead in 2022
ACG International
Webinar Amsterdam Netherlands
More Webinars
Comparative Guides
Cartels
Franchising
International Arbitration
Merger Control
Trademarks
More Guides
Mondaq Advice Centres
Global
Trademarks in SAARC Countries
More MACs