China: Biden? US Presidential Candidates And Their Trademark Protections In China

by Kangxin Partners
Kangxin
Your LinkedIn Connections
with the authors
To print this article, all you need is to be registered or login on Mondaq.com.

Recent US elections brought the two names of Trump and Biden to the forefront of discussion even in China, where many companies and applicants are attempting to ride the wave of popularity and register the names as trademarks.

This is also an opportunity to revisit the legal provisions of name rights and protections. According to Article 32 of Trademark Law, "The trademark application shall neither infringe upon another party's prior existing rights..." The existing prior rights of others include-font size rights, copyrights, patent design rights, name rights, portrait rights, commercialization rights, and other legal prior rights that should be protected.

Related, the Trademark Review Standards clearly state that without express permission, if another person's name is applied for trademark registration, which may cause damage to the name rights of that person, the disputed trademark shall not be approved for registration or be ruled invalid. The names of others may include their real names, pen names, stage names, aliases, etc.

The specific applicable requirements are as follows:

Additionally, Article 10 item 8 of the Trademark Law states that "Those detrimental to socialist morals or customs, or having other unhealthy influences" are forbidden from being registered & used as a trademark. The application for registration of the names of political, economic, cultural, religious and other public figures may be considered as part of the "other unhealthy influences" mentioned above.

A quick scan of the China Trademark database using Kangxin IP Platform returns the following results when searching for Trump's and Biden's names as trademarks.

Searching using one transliteration of Trump's name, 特朗普 (telangpu), returns a total of 606 marks recorded in China, of which 450 are registered and active. President Trump's own filings are in classes consistent with his line of business – real estate services, including golf courses and restaurants, as well as classes which cover clothing. Most marks bearing resemblance to the President's name in Chinese are registered by other parties prior to the 2016 presidential election. Other similar marks either omit one character from the President's name or change the order of the characters, making it more difficult to ascertain whether the mark was made in reference to the popular name.

Marks filed in any class after 2015, when Donald Trump announced his bid to run in the presidential election, were mostly refused by the authorities – 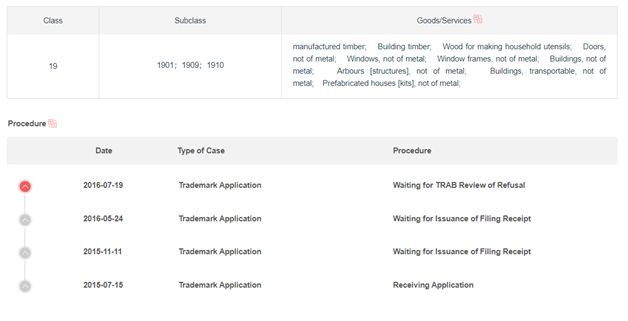 Trump's name has two popular transliterations – the above 特朗普 (telangpu) and 川普 (chuanpu) – take your pick for which one sounds closest to the proper pronunciation!

When searching for 川普, a similar situation emerges -

Trump's team filed for many of the marks in the same classes as 特朗普, but there were a few Chinese third parties which registered the name prior to the US elections, thus securing their rights.

Searching for President-elect Biden's name returns 438 similar results. A life-long politician with no business interests in China, Biden does not seem to have officially registered his own name as a trademark in China. A search for his name in English does return an image that just this summer was filed for registration and resembles a political logo (likely to be rejected due to the name rights protection provisions). 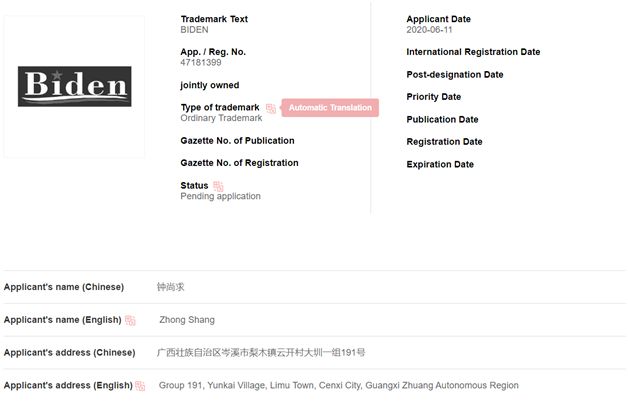 Filings like this one, combining Trump's and Biden's name, made during the last few months when the whole world was anticipating the US presidential election, are likely to be rejected as well.

The trends with rejections are clear – when Trump's name was not well known prior to 2016 election, trademarks with his name were approved for registration in various classes. Since the name was not widely known, there could be no cause for "damage" to the name rights. Since assuming the presidency, Trump's name became known the world over and thus marks with his name are being rejected for registration. A similar trend is likely to happen to Biden and his name, should anyone attempt to register it.

Many celebrities and other high profile individuals have ran into issues with name rights protections in China and elsewhere – but CNIPA adheres to the judgement that the name of the US president is a bit too high stakes to allow registration by others.

ARTICLE TAGS
China Intellectual Property Trademark
POPULAR ARTICLES ON: Intellectual Property from China
All You Need To Know About "Well-Known Trademarks"
Khurana and Khurana
With coming up of the new Trade Mark Rules 2017, a new procedure has been created that allows the Registrar to proclaim a particular trademark as "well known".
Patent Law in India
Anand & Anand
The Patents Act 1970, along with the Patents Rules 1972, came into force on 20th April 1972, replacing the Indian Patents and Designs Act 1911. The Patents Act was largely based on the recommendations of the Ayyangar Committee Report headed by Justice N. Rajagopala Ayyangar. One of the recommendations was the allowance of only process patents with regard to inventions relating to drugs, medicines, food and chemicals.
Deceptive Similarity And Judicial View
Khurana and Khurana
Trademarks play a vital role in creating a brand name and goodwill of any business. Not only does it helps in creating a brand value but also, aids in revenue generation.
Process: Trademark Registration In India
Intepat IP Services Pvt Ltd
Many entrepreneurs do not comprehend the importance of a TM search.
Assignment And Licensing Of Copyright
Singh & Associates
Copyright is a protection given to the creators of certain types of works as an acknowledgment to their intellectual input
Difference Between Passing Off And Infringement Of The Trade Mark
Khurana and Khurana
A Trade mark may be defined as a lawfully protected abstract, word, symbol, color, mark, slogan or a mixture of those related to an organization or a selected product that differentiates it from the others accessible within the market.
FREE News Alerts
Sign Up for our free News Alerts - All the latest articles on your chosen topics condensed into a free bi-weekly email.
Register For News Alerts
Article Tags
China Intellectual Property Trademark
Similar Articles
Powered by mondaq AI
MATCH
53%
How To Protect The Titles Of Works Or Character Names Under The Chinese IP Laws CCPIT Patent & Trademark Law Office
64%
Beyoncé's Daughter, Mbappé And Other Trademarks In China HFG Law & Intellectual Property
54%
Introduction For Trademark Application And Defensive Actions Kangxin
56%
Supreme Court Retries The Michael Jordan Case Kangxin
56%
Trade Name Right Claims In Trademark Opposition And Invalidation Cases Kangxin
Related Articles
Recordation Of Patent License Agreement In China Chofn Intellectual Property
Patent Protection Of Multi-national Joint Invention In China Chofn Intellectual Property
"Double Protection" In China Chofn Intellectual Property
Is It Possible To Protect GUI Designs In China Without Physical Device? Chofn Intellectual Property
Interpretation Of "Intentional" And "Serious Circumstances" In Applying Punitive Damages For IP Trials Chofn Intellectual Property
Mondaq Webinars
Merger Control Trends in Turkish Competition Law
ELIG Gürkaynak Attorneys-at-Law
Webinar Istanbul Turkey
Employment Law: Challenges that Lie Ahead for UK Employers in 2021
Stewarts
Webinar London UK
More Webinars
Comparative Guides
Cartels
Merger Control
Patents
Mondaq Advice Centres
Global
Trademarks in SAARC Countries
Global
Investment Immigration
More MACs
Upcoming Events
Mondaq Social Media