by Ashurst
Ashurst
To print this article, all you need is to be registered or login on Mondaq.com.

Now that the founding members of the Asian Infrastructure Investment Bank (AIIB) have been finalised, focus has shifted from "who," to "what" and "how", and the difference that it is likely to make to the infrastructure market in Asia.

On 15 April 2015, China's Finance Ministry revealed that 57 countries will comprise the founding members of the China-led AIIB (the full list is set out in appendix 12). This briefing considers the purpose, structure and target investments for the AIIB, and the impact that the AIIB might have on investment in infrastructure across Asia.

Purpose of the AIIB

The central mandate of the AIIB, according to the Minister of Finance, Lou Jiwei (Mr Lou), is to support investment in infrastructure and other manufacturing industries in Asia in order to promote economic development and regional co-operation across the region. If conditions permit, the AIIB may also explore investments in non-regional projects.3 The AIIB's mandate does not currently appear to include poverty reduction, which differentiates it from other multilaterals such as the Asian Development Bank (ADB) and the International Finance Corporation (IFC).

From a Chinese perspective, it has also been suggested that the wider aims of the AIIB are to enhance the integration of China with neighbouring countries and to fast-track the openness of China's capital account and the internationalisation of RMB. 4

The AIIB was officially launched on 24 October 2014, pursuant to the "Memorandum of Understanding of Establishing AIIB" (MOU), signed by the first group of 21 prospective founding members. A temporary Secretariat (presently headed by Jin Liqun, chairman of China Investment Corporation's supervisory board and former president of China International Capital Corporation) is responsible for developing the Articles of Association (AoA) for the AIIB. These are still being drafted through negotiations between representatives from the finance ministries of each founding member. China has been chairing this negotiation process together with the host country of each round of negotiations. 5

Indications from the latest round of negotiations in Singapore in May 2015 are that the AoA are substantially now in agreed form and that the AIIB is on track for signing the AoA by the end of June 2015.

The current proposed form of the AIIB's governance structure is three-tiered, with a council, a board of directors and an executive management function:

According to the MOU, the authorised capital of the AIIB will be US$100bn and the initial subscribed capital is expected to be US$50bn. The paid-in ratio is expected to be 20 per cent, 10 with capital paid by members in instalments. The Ministry of Finance has indicated that it is likely the AIIB will increase its capital in the future in accordance with business needs. 11 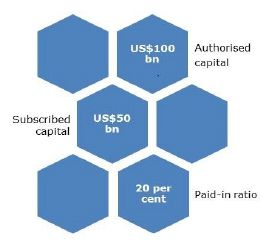 Initially, the AIIB is expected to provide sovereign loans to countries for their infrastructure projects. For infrastructure projects which are not guaranteed by sovereign credit, the AIIB will provide financing through public-private partnerships (PPPs), seeking to share risk and return with the private sector, while at the same time unlocking more capital from sovereign wealth funds, pension funds and the private sector. For PPP investments, it is understood that the AIIB is considering setting up specific funds to provide such financing. 13

It has been reported that the AIIB will focus on large-scale infrastructure projects, such as toll roads, power plants, seaports and airports, which aligns with its mandate to promote economic development and regional co-operation14 and, in the case of seaports, with its initiative for a maritime Silk Road as referred to below. As noted above, initially, it will invest only in the Asian region, although it has been suggested that, if conditions permit, the AIIB may also explore investments in non-regional projects. 15

It is expected that the AIIB's investment strategy will also complement the "one belt, one road" initiative launched by the Chinese Government in 2013. Mr Lou has stated that the AIIB will endeavour to catalyse infrastructure development and integration across Asian countries. This would include providing funding support for infrastructure projects of the AIIB's members located along the "one belt, one road" economic belt. "One road, one belt" refers to China's proposed New Silk Road Economic Belt, which will link China with Europe through Central and Western Asia, and the twenty-first century maritime Silk Road, which will connect China with South East Asian countries, Africa and Europe. 16 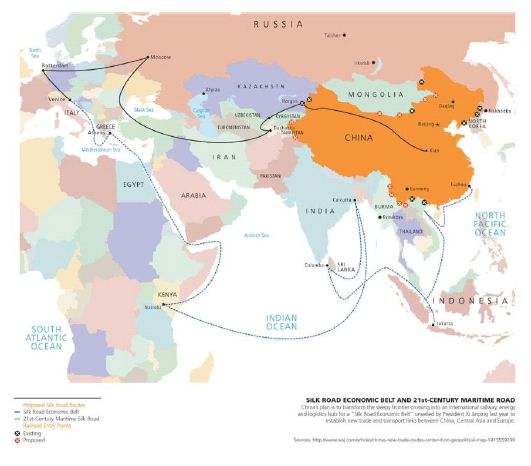 A question being asked by many is whether the AIIB will act in collaboration, co-existence or competition with other multilaterals, export credit agencies (ECAs), commercial banks and other infrastructure investors. The answer may well be, all three.

On the sidelines of ADB's 48th Annual Meeting held at the start of May this year, the President of the ADB, Takehiko Nakao, and the Secretary General of the Multilateral Interim Secretariat of the AIIB, Jin Liqun, confirmed their commitment to working together for Asia and discussed future collaboration and co-financing. 17 The IMF, World Bank and IFC have also highlighted their willingness to work together with the AIIB to meet the infrastructure financing needs of Asia and, on its part, the AIIB has stated that it wishes to co-operate actively with existing multilateral development banks in knowledge sharing, capacity building, human resources and project financing. 18 Given the infrastructure needs in Asia, there is certainly scope (and precedent) for multi-sourced financing from a mix of multilaterals, ECAs, institutional investors and commercial banks, especially for those large-scale projects that the AIIB is said to be focusing on. Collaboration in knowledge sharing and capacity building may also help to address the concerns raised in some quarters as to the transparency, governance, accountability, debt sustainability and environmental standards that will be adopted by the AIIB. It is anticipated that many of the founding members will be keen to encourage collaboration in these areas, and the AIIB is said to already be examining best practice in respect of the standards that should be adopted.

The AIIB may be able to provide funding for projects, such as coal-fired power plants, that other institutions no longer have a mandate to fund. Through its sovereign loans, the AIIB may also provide an additional funding source for social infrastructure projects that may be difficult to bank or that are not suitable for a PPP or project finance model. In some countries and sectors, therefore, the AIIB may co-exist with other multilaterals, ECAs and financial institutions by financing different types of projects.

There is no doubt, however, that there will also be added competition with the arrival of the AIIB, especially in relation to the funding of much sought-after well-structured projects. It seems that most market participants acknowledge a little competition as a good thing for countries with a pipeline of infrastructure projects. They also note that this would be nothing new, with competition already existing between multilaterals, ECAs and commercial banks. In his opening address to the 48th Annual Meeting of the ADB Board of Governors, ADB President Takehiko Nakao highlighted his intention to make ADB stronger, better and faster, including by strengthening its lending capacity through the merger of ADB's Asian Development Fund lending operations with its ordinary capital resources. The initiative will increase ADB's annual operations to as much as US$20bn or 50 per cent above the current level. 19 While these initiatives were no doubt in the making prior to the advent of the AIIB, they are also perhaps a sign of increased vigour and momentum for the regional infrastructure market.

Additional capital is not all that is needed

While an additional source of funding for infrastructure in Asia is always welcome, especially given the scale of funding that is required, it is not all that is needed to address Asia's huge infrastructure gap. For infrastructure that will be built based on sovereign loans from multilaterals like the AIIB or on a government-to-government basis, the current deal-flow is reasonably strong. However, for infrastructure proposed to be developed on a project finance basis, a number of institutional investors and commercial lenders have highlighted that they have the funds and mandate to invest in or lend to infrastructure in the region, but that what is lacking is a pipeline of well-structured, bankable projects in which to invest or lend their funds.

There are, in our view, a number of factors which will be key to unlocking a successful pipeline of bankable projects in Asia:

Some countries in the region have already taken great steps forward in addressing these issues, including, for example, the Philippines, with its very active PPP centre that has the support of senior government officials and that publishes and promotes a full pipeline of projects across a range of sectors; and Vietnam, that has recently enacted its PPP Decree. 20

Global and regional institutions are also focusing on ways in which they can assist governments to remove the barriers to bringing bankable projects to market. For example, the ADB has established an Asia Pacific Project Preparation Facility (AP3F) to finance project preparation work, including due diligence covering technical, financial, legal and regulatory issues, as well as safeguards. This facility will be managed by the ADB's Office of Public-Private Partnership (OPPP) and will initially be funded by the Governments of Japan, Canada, Australia, as well as the ADB, with additional donors expected to join in the future. 21 ADB has also recently announced that it has signed a PPP co-advisory agreement with eight global commercial banks, pursuant to which ADB and the eight banks will work together to provide independent advice to governments in the region on how best to structure PPPs to make them attractive to the private sector.

Further, in 2014, the G20's Finance Ministers endorsed the Global Infrastructure Initiative (GII) which aims to increase long-term private investment in infrastructure. One of the GII's key action items is to increase the availability of investment-ready projects, including through facilitating knowledge sharing between governments and multilaterals, preparing model documentation, and building the capacity of officials to improve institutional arrangements.

There has been much focus and attention by the media on the politics surrounding the AIIB and who its founding members would (or would not) be. Now that the founding members have been announced, attention can turn to the mandate and potential impact of the AIIB on the infrastructure sector in Asia. The AIIB has been keen to reassure other governments and multilaterals who have raised concerns about the governance and standards that the AIIB will adopt "best practice" and it is currently identifying what this entails, no doubt with reference to similar financial institutions.

The hope among many market participants is that, with the right governance and standards, the AIIB will increase momentum within the infrastructure market in Asia.

The scale of the investment required in Asia is so great that multiple sources of funding will continue to be required to address this need, both in the form of sovereign loans (which we understand the AIIB will grant to governments) and through project finance and PPP models.

In order to enable funding from multilaterals, ECAs, commercial lenders and institutional investors to flow through to meet the infrastructure demand, governments, institutions, market participants and advisers will need to continue to work together to identify and remove the barriers that currently exist to bringing a pipeline of well-structured, bankable projects to market. Much work has already been done or is in progress to remove those barriers, and if that momentum can continue, then Asia has the potential to be a vibrant market for infrastructure investment, with the AIIB playing an important role alongside existing multilaterals and development banks.