China: The Evolution: Trends From China For The Offshore Industry

China has experienced extraordinary growth over the last 20 years, becoming the second largest economy in the world – with some metrics granting China number one status ahead of the United States. While the Chinese economy has undoubtedly slowed in the last two years, it still proceeds at levels that would be the envy of many Western nations.

Under the leadership of Xi Jinping, China is adopting a new growth model, one that involves opening up further to the rest of the world. This model encourages private investment, with a greater focus on domestic consumption, while improving consumer and environmental protections, a greater respect for laws and less governmental interference in the market.

To further these aims, the Chinese government has launched a new wave of investment in public infrastructure, in order to stimulate the economy and pave the way for future growth. There is stronger enthusiasm for outbound investment, and Chinese companies are encouraged to invest overseas with support from the government – this is achieved by way of financing, information sharing and by an easing of regulatory approval procedures. New laws have been issued, regulations and policy documents approved, with an extensive anti-corruption campaign being conducted simultaneously.

All of the above has significant implications for the offshore industry in its dealings with China, some of which will be examined in the following article.

The swing for offshore corporate service providers from China inbound business to outbound has been widely anticipated. In the Offshore 2020 report – a leading annual market research conducted by OIL, out of 300 professionals in the offshore industry, more than half reported conducting China related business. In the 2013, 56% reported that their business was China outbound - for the first time crossing the threshold of more outbound than inbound business. The same theme continued in 2014.

In spite of the slowdown of the Chinese economy, the offshore industry still looks exceedingly favourably on business coming from China. When asked to name the top 10 locations for client origination over the next five years, 40% of Offshore 2020 survey respondents opted for China as the top location. This is well ahead of the second and third locations, the United States, (at 13%), and United Kingdom, (10%), respectively.

Interestingly, even when respondents are sorted between those based in Asia, (who may reasonably be expected to rely more greatly on new business from China), and those based outside Asia, the results remain the same: it appears that service providers worldwide are looking to China for their new business growth.

Another aspect of the further development of China's economy, and overseas investment, relates to the use the renminbi, (RMB). As the economy is liberalised, the use of RMB as a settlement currency for cross-border trades increased. Should this development be a concern to offshore company providers?

On the one hand, RMB liberalisation could lead to a fall in demand for offshore structures, because using "conduits" for outbound capital flow would no longer be a structural necessity. On the other hand, easing Chinese investors' and their corporate vehicles' passage into international markets may boost activity, creating a larger overall pie of which offshore service providers have a share.

Offshore 2020 survey respondents, by a substantial majority (82%), said that the continued liberalisation of RMB will have a positive impact on the offshore market in the medium-term.

So, we have more new business sourced from China, a greater percentage of that business being outbound in nature, and a larger overall pie for the offshore industry. What insights do we have into the preferred jurisdictions for China outbound business?

When asked this question, Offshore 2020 respondents cited Hong Kong and the BVI as the preferred conduits, by a considerable margin, (40% and 33% of the vote respectively), with the Cayman Islands third (7%), and the Seychelles in fourth (5%).

And what form may that new business take? Considerable evidence, anecdotal and otherwise, points to an increasing complexity for business, both inbound and outbound from China.

Since the late 1980s, the BVI has the been the pre-eminent jurisdiction for international business companies and the BVI company has traditionally been the vehicle of choice for many years in Greater China and throughout Asia – such that the term "BVI" has been used interchangeably to describe an offshore company. A straight-forward BVI company, owned and operated by its beneficial owners, would have been standard practice for many Chinese clients. 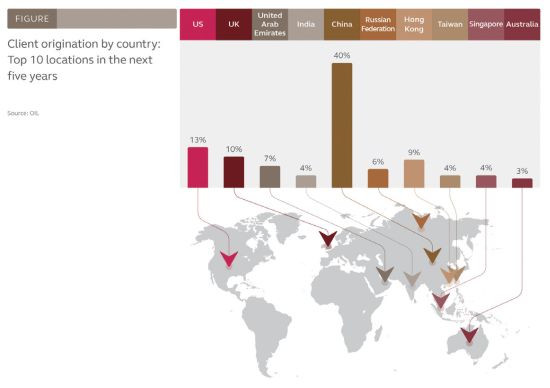 While the BVI company continues to be very popular, we have recently seen a greater use of BVI trusts and a commensurate increase in the number of BVI private trust companies ("PTCs") being established to act as the trustee of such trusts.

These vehicles are being set up for the same reasons that wealthy individuals and families in the West and elsewhere have always done: primarily succession planning, wealth planning, avoiding probate, asset protection, and privacy among them.

In addition, Cayman companies, until recently the only offshore vehicle that could list on the Hong Kong Stock Exchange, (the BVI and other jurisdictions have since been permitted), have been very popular both for use as listing vehicles, but also for collective investment schemes, (Cayman is the world's leading funds jurisdiction), and capital market and structured finance vehicles.

Pre-IPO planning is also a key dynamic of the China offshore market. Investor appetite IPOs is close to pre-crisis levels and many of the recent IPOs across global exchanges have been issued by Chinese based businesses, some of which have been very high profile. Alibaba's recent listing on the New York Stock Exchange was exceedingly well-publicised – less well-publicised was that subscribers actually acquired shares in a Cayman company that, in turn, received dividends from Alibaba.

The recent announcement by Li KaShing, reputedly Asia's wealthiest man and a titan of the Hong Kong economy, of a restructuring of his existing businesses into one listed Cayman vehicle has added more cachet to Cayman as a jurisdiction. We believe we are already seeing the influence of these public announcements and have seen a growth in recent months of Cayman incorporations from Greater China.

In conjunction with their relevant onshore legal, tax and other trusted advisors, wealthy Chinese individuals and families will, therefore, seek to establish the type of structurethat is suitable for their own, their business and their family's personal circumstances. Oftentimes, that structure will now, due the greater demands of more outbound and cross-border business, involve more than one offshore company, but a variety of vehicles to suit the specific circumstances. 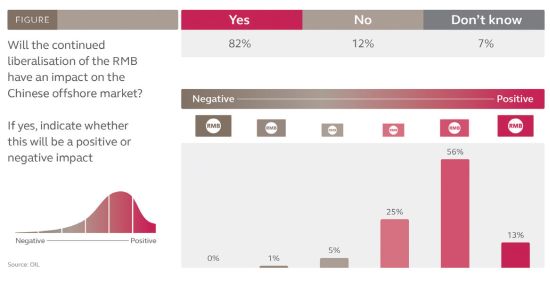 What advise do we at OIL have for jurisdictions, and service providers, that are looking to China for new business? The key word is engagement. The BVI, for example, established in 2013 BVI House Asia, a business development and diplomatic office, based in Hong Kong, staffed by senior marketing and regulatory officials from the jurisdiction. Other jurisdictions, Guernsey and Jersey among them, have established similar offices in Shanghai and Hong Kong respectively. The BVI has also entered into a Memorandum of Understanding with the Shenzhen Government in relation to its Qianhai Free Trade Zone. At the time of writing, it is unclear how that partnership will proceed, but it underscores the wish for jurisdictions to engage with and get close to policy makers in China.

In this article, we have necessarily painted a rosy picture of business trends and developments– but, clients, and their service providers, must ensure that they stay abreast of local regulations, tax legislation and enforcement. China, contrary to the common law systems of many of the jurisdictions that are offering services there, is a rules-based system. This can lead to some inconsistencies and difficulties.

For example, in September 2014, several of the larger Chinese banks declared that they would no longer open bank accounts for companies that have a PO Box appearing in their registered office address. This is notwithstanding that, in many countries, there is no developed postal system and a PO Box is often the only way to deliver mail. This new rule has led to service providers scrambling to change their addresses, where possible, and clients seeking to ensure that they can continue their banking arrangements. While this issue is manageable, there will likely be other potential obstacles to overcome.

We have not considered in this article, issues relating to FATCA, the Common Reporting Standard (CRS) being driven by the Organisation of Economic Cooperation and Development (OECD), to which China is a signatory, and other matters, which are a function of the post-financial crisis economy – but, no doubt, the industry will, continue to evolve and develop to handle new requirements as they emerge.

Five years into the Offshore 2020 market research initiative, we at OIL have witnessed the emergence of a handful of trends in the offshore industry – some of these can be extrapolated through to the year 2020. For China, we predict that it will the major growth driver for new business within the industry – this will be led by state owned enterprises and private companies from all sectors expanding overseas, the local base of high net worth individuals growing at a pace far above that in Western markets, and an increasingly convertible RMB facilitating the move of a further wave of Chinese capital into the global economy.

As China becomes more integrated into the global economy, the fruits of its growth will not just be borne by Greater China-based service providers alone. Service providers across the entire spectrum of the value chain – legal, accounting and corporate services – will be actively looking to China to drive future business growth. All major jurisdictions will be more proactive with their engagement with the country in an attempt to create a niche for themselves. 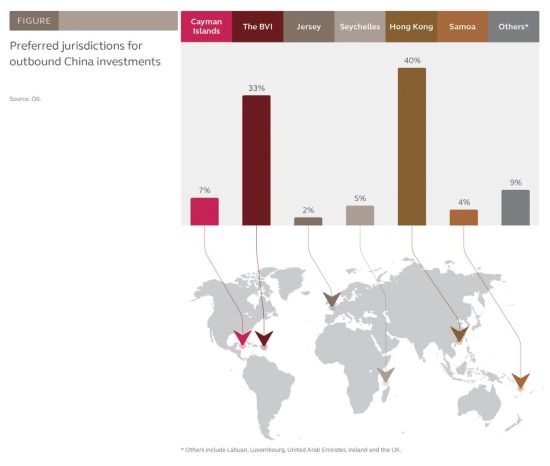 Another trend that has been observed over the last five years, both in Greater China and across Asia, is the rise of what we refer to as the "Big Four" jurisdictions. These are the BVI, Cayman, Hong Kong and Singapore. The BVI's pre-eminent role as a lynchpin for international business companies and Caymans' popularity for investment funds and capital market vehicles, as detailed above, may gradually erode, but we do not believe they will fracture. Hong Kong and Singapore will continue to grow in importance as "mid-shore" jurisdictions, offering a combination of traditional offshore benefits and onshore credibility, enabling clients to build substance.

We have further detailed the need for engagement with China, both at the governmental and regulatory level of a specific jurisdiction, and also at the service provider level.

In conclusion, and as per our predictions for the year 2020, offshore corporate service providers, who do not have a China strategy, do so at their peril.