China: [IP & CULTURE] Druet vs Cattelan: Who's The Real Author? 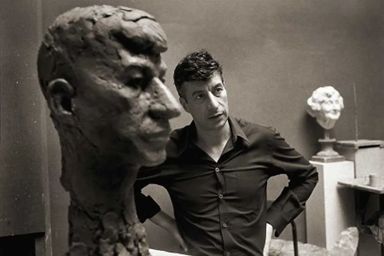 2022. On May 13th, the trial between the French sculptor Daniel Druet and the Italian conceptual artist Maurizio Cattelan opened at the Paris Judicial Court.

Druet is asking to be recognized as the exclusive author of nine works he made for the Italian artist, as well as 5 million euros compensation.

1965. Michel Guino, French artist, son of the (more) famous Richard Guino, decided to start a process in order for his father to be recognized as co-author of the sculptures of Auguste Renoir, one of the most famous artists in the world. 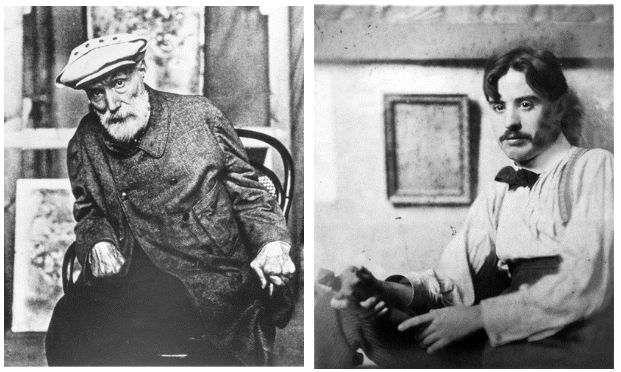 These two stories, more than 50 years apart, have a lot in common.

To better understand how the two events are connected, we have to step back to the beginning of the XX Century.

1913. Auguste Renoir, being very weakened, seeing little and losing the use of his hands, entrusted the realization of the sculptures he imagined to the young artist Richard Guino, on the recommendations of the merchant Ambroise Vollard. From that moment, Guino will be "the hands" of Renoir and will transpose into the material, with great accuracy, the vision of the painter, the skillful instrument who willingly followed his directions.

He yielded before the personality of Renoir and succeeded so well that the works have all the qualities of Renoir's style.

In 1947 the art historian Paul Haesaerts published a book, Renoir sculptor, where he wrote that "Guino was never simply an actor reading a text or a musician mechanically interpreting a score [...]. Guino was involved body and soul in the creative act. It can even be said with certainty that if he had not been there, Renoir's sculptures would not have seen the light of day. Guino was indispensable". 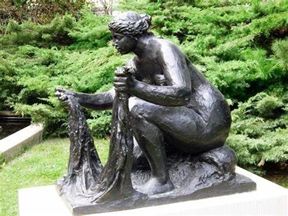 1971. After 6 years, the Third Civil Court of the Tribunal de Paris declared Richard Guino as co-author of Renoir's sculptures, judgment settled by the Court of Appeal in 1973.Richard didn't see the final ruling: he died before the sentence in February 1973.

Would Renoir have agreed to attribute at least in part the paternity of his works to Guino? We will never know. Probably the old artist, who died in 1917, would never have imagined such a problem.

We can think that this was a unique situation.

It's not: and it poses a fundamental question on the paternity of works of art not only with regard, as we already discussed, to the productions of artificial intelligences.

The new litigation between one of the most well-known Italian concept artists and an unknown French sculptor is the demonstration that this matter is far from the solution.

Again, let's start from the beginning. 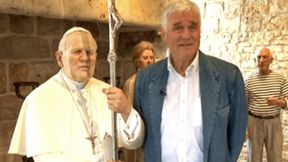 1999. The Italian artist Maurizio Cattelan goes to the Musée Grévin and is struck by the features of the wax statues on display, so much that he researches the author, who turns out to be Daniel Druet, and commissions some works.

The collaboration between the Italian artist and the French master sculptor started that same year, and lasted until 2005.

The result of the collaboration is visible in some sculptures Druet made for Cattelan: among these, the super famous The Ninth Hour (1999), which shows Pope John Paul II hit and landed by a meteorite and Him (2001), which depicts Hitler in a kneeling child's body, auctioned in 2016 for over 17 million euros. 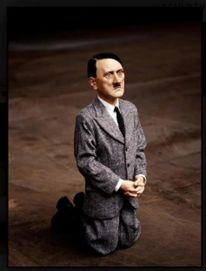 These works have aroused clamor and indignation over time, helping to increase the fame of Cattelan. Druet, on the other hand, was paid an average of 33 thousand euros per statue and his name never emerged.

According to Druet, between 1999 and 2005 he made nine sculptures for the conceptual artist. According to the Gallery Perrotin, who represents Cattelan, only 4: Beside the already mentioned, The Revolution Is Us, which represents Maurizio Cattelan with Beuys' felt dress hanging from Marcel Breuer's coat rack, and Untitled, Cattelan's head coming out of the floor. 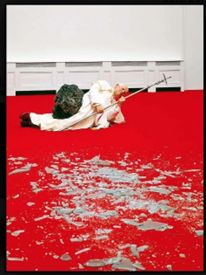 What goes without doubts is that Druet did make some sculpture based on the ideas and suggestions of Cattelan, and he has been paid for them.

On the other hand, the sculptor argues that Cattelan does not know how to paint, sculpt or draw, that he gave only summary instructions and that without his own sculptures, nothing would have been possible.

Druet told how the collaboration with the artist worked twenty years ago: Cattelan, or some of his Italian collaborators, sent a fax in a stunted French with 10 lines of instructions to make the works. "It was all quite vague," Druet explains, "and it was up to me to handle it."

The question of intellectual property in conceptual art is therefore raised. The judges will have to decide the thorny question: Who is the artist?

We have already talked about the fact that the paternity of art can be sometimes not obvious: as in the case of Artificial Intelligence, for example.

It is the old question whether the author is the one that has the idea, or the one that physically makes the piece of art.

From Duchamp onwards, contemporary art has been overwhelmed by a conceptual change, moving the work from the object to the concept. After that turning point, it was no longer possible to judge the works only starting from their aesthetic realization. 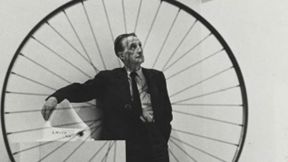 More practically: One can argue that the artist had the idea, but he wouldn't be able to take it into reality without the help of a "performer".

But if the one that makes the piece has been paid for the service, isn't he just a mere executor of the artist's intention?

The answer is No.

And those sculptures could have been done by another master sculptor?

The answer is Yes (probably).

If Druet wins, every artist can be sued by masters who are merely executors of the artist's intention.

Needleless to say that, despite I work and write for an Ip firm, I am not jurist, even less one of the French judges having the Druet vs Cattelan case on their desk. My considerations are basically from a philosophical point of view.

Nevertheless, from a wide IP perspective, as we already said here, the copyright laws around the world protect not the idea, but the expression of that idea. To be copyrightable, a work of art must be original, work of authorship and fixed in tangible form.

Can we say that, with these premises, the sculptures cannot be copyrighted under the solely name of Cattelan?

Or, to put the question from a different perspective, can Druet be considered an artist himself, and in which percentage his creativity determined the representation of the sculptures?

These questions are more difficult to answer to.

We'll have to wait and see: The Parisian court postponed the decision to July 8th. Indeed, the decision could have important consequences for conceptual artists and those who collect their works.

What we can add is that the request of being recognized as the solely author might be a strategy to obtain to be recognized at least as co-author.

Cattelan and Druet, as Renoir and Guino.

ARTICLE TAGS
China Intellectual Property Copyright
POPULAR ARTICLES ON: Intellectual Property from China
When shopping around for house plans leads to a breach of copyright
Holding Redlich
Couple found to have infringed copyright of house plans but only nominal damages awarded because no loss shown.
Intellectual Property Updates From India
IndusLaw
As we reach the third quarter of 2022, we have witnessed no dearth of pathbreaking developments in the field of Intellectual property rights.
The Fiction, Function And Formulation Of Swiss-style Claims In New Zealand
Davies Collison Cave
Traditional Swiss-style claims provide a unique form of protection for pharmaceutical patentees against the authorised use of an active agent in the manufacture of a medicament for...
Clinical Trial Disclosures A Significant Risk To Patent Validity In Australia
Davies Collison Cave
We recently published in Australasian Biotechnology (and on our website) on the nexus between IP and clinical trials in Australia.
Importance Of IP In Metaverse
Photon legal
As more and more companies move into the super-hyped space of metaverse, the importance of Intellectual Property (IP) becomes more and more crucial than ever. IP is what allows companies to...
Data requirements for a sufficiently enabled patent specification – How much experimental detail is enough?
Spruson & Ferguson
Balance between an early priority date which is light on data, or a later priority date with plenty of supporting data.
FREE News Alerts
Sign Up for our free News Alerts - All the latest articles on your chosen topics condensed into a free bi-weekly email.
Register For News Alerts
Article Tags
China Intellectual Property Copyright
Similar Articles
Powered by mondaq AI
MATCH
50%
The Magic Of Artistic Works IPO Pang Xingpu
Related Articles
News & Cases From China: June 2022 Rouse
Design Patent Invalided By Prior Trademark IP March
Patent Commercialization Activities At Chinese Universities Skyrocket In Past Decade AFD China
Five SMEs Win Inaugural WIPO Global Awards, Two From China AFD China
2022 H1 IP Statistics：Confidence Of Foreign Investors Boosted In Doing Business In China AFD China
Mondaq Webinars
Litigation Funding in Canada
Nomos Capital Corp.
Private Wealth - Getting it Right: Trusts, Foundations and Funds
Dixcart Group Limited
More Webinars
Comparative Guides
Franchising
International Arbitration
Patents
Trademarks
More Guides
Mondaq Advice Centres
Global
Trademarks in SAARC Countries
More MACs