On 1 March 2021, Amendment XI (the Amendments) to the Criminal Law of the People's Republic of China (the 2017 Criminal Law), took effect. Among other ramifications, the Amendments significantly increase the penalties for private individuals (i.e., non-state functionaries) who are convicted of corruption, including soliciting or accepting bribes, embezzling company assets, or misappropriating company funds. The Amendments also add a new sentencing standard applicable to private sector corruption. These Amendments bring the levels and standards of penalties imposed on private corrupt actors, in line with those previously reserved for corruption by state functionaries.

This alert examines the above changes to the 2017 Criminal Law, and key considerations for multinational companies with operations in China.

For example, under the 2017 Criminal Law, the highest sentencing level for the crime of accepting or soliciting bribes of a "huge" amount, was a minimum of five years' imprisonment, and, under certain circumstances, the confiscation of property. The Amendments create an additional sentencing level for accepting or soliciting bribes of an "especially huge" amount, which now result in imprisonment for a term of 10 years to life, and a fine. In this respect, the Amendments bring the sentencing levels for non-state functionaries into line with those previously applied to state-functionaries for the same offences. 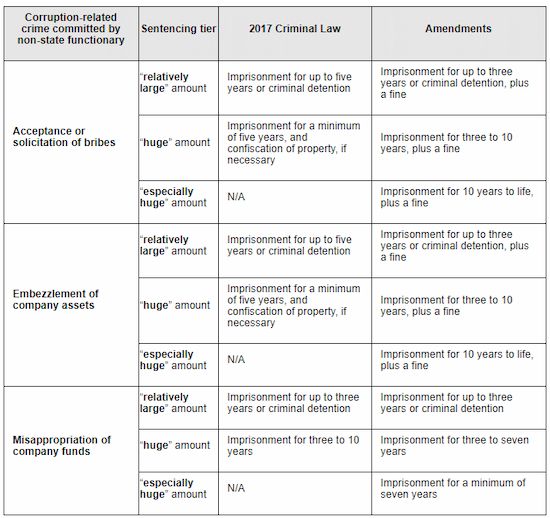 It is worth noting that while what constitutes a "relatively large," "huge," or "especially huge" amount is not set out in the 2017 Criminal Law or the Amendments, the guidance issued by the People's Supreme Court and Supreme People's Procuratorate, in April 2016 (the 2016 Guidance), is instructive. The 2016 Guidance suggests that a "relatively large" amount ranges between RMB 60,000 (approx. US$9,000) and RMB 1 million (approx. US$150,000), while a "huge" amount exceeds RMB 1 million

Under the 2017 Criminal Law, the gravity of a bribery-related offence by a non-state functionary, and the corresponding sentencing levels, were based solely on the value of the disputed amount (i.e., the amount of the bribe, or the value of the embezzled assets or misappropriated funds). Violations involving a " relatively large" or "huge" amount would attract prison sentences of up to five years, or a minimum of five years, respectively.

The Amendments provide a new standard for sentencing for corrupt conduct based on the "seriousness of the circumstances" surrounding the violation. Corrupt conduct involving "serious circumstances," is subject to a fixed-term of three to five years' imprisonment, and a fine. Violations involving "especially serious circumstances" give rise to prison sentences of 10 years to life, and a fine. Under this new framework, if a violation by a non-state functionary does not meet the monetary thresholds for a particular sentencing range, it may nonetheless give rise to the corresponding prison term and monetary fine, if it is found to be particularly egregious.

a) Assess current anti-corruption policies and procedures, to ensure that they are up-to-date and reflect the latest laws and regulations

With the Amendments increasing the criminal liability of corruption by non-state functionaries, companies are exposed to greater risks of being subjected to inquiries by Chinese regulators. For example, if an employee of a multinational pharmaceutical company were to give a bribe to a prescribing doctor in China, that doctor (traditionally viewed as a non-state functionary), would now be exposed to greater criminal liability under the new sentencing framework. Similarly, if that employee were to solicit or accept a bribe from another individual (e.g., a distributor or third party vendor), the employee, as a non-state functionary, would also be exposed to increased liability.

Companies should be attuned to these heightened risks, and review their current policies, including those covering anti-corruption, interactions with third parties, and conflicts of interest, to ensure that adequate safeguards are in place to mitigate any potential risks.

b) Conduct investigations to identify current and potential risks

The Amendments, together with other recent updates to China's anti-corruption laws, highlight the importance of having a robust compliance programme, and conducting reviews to identify alleged instances of misconduct.

The Amendments come on the heels of Shanghai's Anti-Unfair Competition Regulation (the Shanghai Regulation), which took effect on 1 January 2021. The Shanghai Regulation introduced, for the first time under Chinese law, an explicit requirement for companies to maintain an adequate compliance programme, to "strengthen the internal control and compliance management, and consciously resist unfair competition acts". Regulators are granted the authority to inspect a company's implementation of its compliance programme in preventing commercial bribery.

Further, amendments to China's Anti-Unfair Competition Law, which took effect in January 2018, create a rebuttable presumption that companies are liable for the offering of bribe by their employees. To avoid liability, companies must demonstrate that they have implemented "reasonable" and "effective" measures to "monitor" potential corrupt conduct by employees, and that they are not taking a "lenient stance" or "covering up" corrupt conduct (see Reed Smith's prior alert regarding key changes to China's anti-corruption landscape).

These developments align anti-corruption Chinese laws and regulations, with those of other jurisdictions, including the U.S. Foreign Corrupt Practices Act and UK Bribery Act.

To detect misconduct and mitigate any associated potential risks, companies should continue to exercise vigilance in conducting investigations into allegations of corrupt conduct. In addition, companies should conduct periodic audits, taking a risk-based approach, to actively monitor higher-risk areas.

Considering the increased risks associated with corrupt conduct by non-state functionaries, it is particularly important for companies to provide employees with regular periodic compliance training. The training can help to ensure that employees are aware of the implications of the Amendments, explain any new or updated policies intended to mitigate potential risks, and deter noncompliant and illegal behaviour.

The Amendments signal China's latest efforts with respect to its increasingly aggressive stance on anti-corruption enforcement. Accordingly, companies should review their existing compliance programmes in China to identify potential risks and to minimise potential criminal liability.