Toby Mak explains that in China, exhaustion of rights extends far; but did not extend to the defendant claiming to be a Victoria's Secret distributor or agent in China. But only in relation to the service mark.

This article reports the first instance and appeal decisions in at the Shanghai People's High Court on an alleged trade mark infringement (by the supply of both goods and services) and unfair competition, by Shanghai Mice Investment Management Co., Ltd (Mice) of the registered trade mark "Victoria's Secret" ("VS") in China. The proceedings were brought by Victoria's Secret Store Brand Management Company (VS Brand Management), the company owning the registered trade mark "Victoria's Secret" in China, in both English and Chinese (good work that the trade mark in Chinese is also covered), in classes 25 and 35 for VS products and services, respectively.

The case is of particular interest in part because of the astonishing level and nature of promotional activity using references to VS by Mice, which it continued to deny in the proceedings, and in relation to the examination of the defence that such use was non-infringing because the goods it was selling were genuine VS goods, and the references were therefore legitimate.

VS Brand Management sued Mice for using the trade mark "VICTORIA'S SECRET" on signboards, staff cards, VIP cards, in relation to fashion shows at shops it operates, for selling VS products through an "exclusive shop", using VS trade marks "VICTORIA'S SECRET" and "VICTORIA'S SECRET (in Chinese)" in numerous advertisements and promotional activities, and stating to the public that Mice's shops were the retail stores, the exclusive stores, or flagship stores of "VICTORIA'S SECRET" or "VICTORIA'S SECRET (in Chinese)", by stating that Mice was the brand operation parent company, the brand operator in the Chinese region, the China head marketing company, the head supplier in Beijing, Shanghai, Guangzhou, Shenzhen, Chongqing, Tianjin great regions, the brand PR marketing operator, the headquarters of Victoria's Secret in China and so on, and conducting franchising sales activities, without VS Brand Management's authorisation, all resulting in trade mark infringement and unfair competition. As is typical in other infringement cases, VS Brand Management asked for the following:

At first instance, Mice argued that:

Both the first instance and appeal courts decided that there was overwhelming (and confirmed) evidence against Mice as to what they had done, so details of these are omitted. That is, there was not much to argue about regarding point 2. Points 1 and 3 need some further explanation, see the figure on page 16.

Firstly, some more players: a company called Shanghai Jintian Clothing Co., Ltd ("Jintian") purchased VS underwear products worth about US$5.1 million from LBI (the parent company of the plaintiff) in September 2007. A further company, AFB was (according to the court decision) authorised to supply redundant stocks of VS products purchased from LBI to resellers. AFB had to observe certain rules in relation to such sales and all resellers to whom they sold also had to observe the same rules on AFB. AFB then authorised Jintian to be the sole distributor of VS products in China, upon approval from LBI.

(Although not specifically stated in the decision, I believe Jintian's purchase was made via AFB, as otherwise it made no sense to mention the AFB stock sales agreements with VSSLLC in the decision.)

The rules under which AFB had to operate arose from a stock sales agreement between VSSLLC and AFB included the following specific terms:

In November 2011, Jintian signed a Strategic Co-operation Framework with Mice, stipulating that

"With regard to the sales of authentic Victoria's Secret's products purchased from US LBI and authorized by US AFB, Jintian entrusts the entire rights to sell goods and authorise distribution, to Mice. Mice has all the rights that Jintian has through the authorisation from US AFB. Jintian does not independently develop any distributor except maintaining the current distributors..."

The first instance court determined that:

The first instance court identified five issues, set out below.

1. Did VS Brand Management have the right to sue?

This issue was raised because a quarterly report from LBI stated that its subsidiaries had been absorbed, and that the name of LBI had, on 22 March 2013, been changed to LBrands, Inc. However, according to the certificate provided by the plaintiff – the certificate issued by the Secretary of Delaware State on 15 November 2013 – the plaintiff was established in accordance with laws of Delaware, and was indicated to be a legally existing company according to the records of the Delaware's Secretary's office on 15 November 2013, the time when the case was tried. 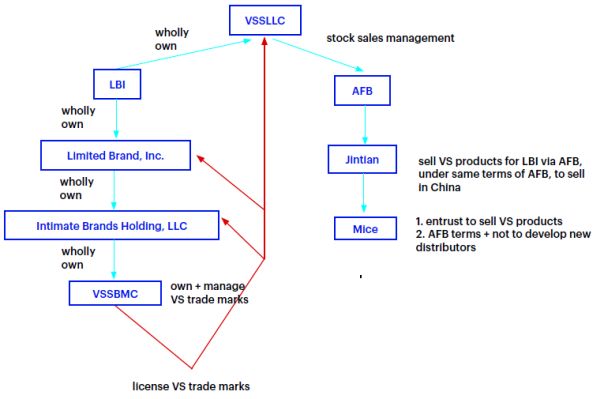 2. Had Mice performed the infringing acts?

As mentioned before, VS Brand Management provided overwhelming notarised (by Chinese notary, of course) evidence, and there was not much to argue about this.

With regard to the use of VS trade mark in relation to the sale of VS goods, since the defendant did not sell fake products, Mice's act of selling VS goods was found not to be infringing. The first instance court also stated in its decision that trade mark owner has no right to prohibit others' indicative use of their product trade mark in product sales, even if a service trade mark identical to the product trade mark was registered. (In case the readers are not aware, China observes the principle of exhaustion of IP rights in a very exhaustive manner in relation to already sold products.)

However, with regard Mice's use of VS trade mark at cashiers, on staff name badges, on VIP cards, in fashion shows and so on, the first instance court decided that these had gone beyond the scope of "use for selling VS products". Furthermore, Mice did not attach other logos to distinguish the source of service when doing the above, but actively declared:

4. Did Mice's acts amount to unfair competition against VS Brand Management?

With regard to the use of the VS trade mark in promoting Mice's relationship with VS, the first instance court stated that there was no evidence proving Mice was the licensed or delegated agent of VS, nor that Mice had any right to use the intellectual property in this brand, while Mice claimed numerous things (to be the Chinese head marketing company, head supplier, head distributor in Beijing, Shanghai, Guangzhou, Shenzhen, Chongqing, Tianjin great regions, Chinese head office, the brand operation head company of VS, that the Meiluocheng store was a direct sales store, flagship store, (brand) image store, exclusive store and so on of VS, and developed licensed business cooperation, to the public). The first instance court also noted that several domestic media outlets reported and publicized the plaintiff, and this publicity could cause the relevant public to misunderstand that the defendant was in a licensing relationship with the plaintiff. The first instance court determined that Mice obtained competitive advantage improperly.

5. What remedies should be granted?

Mice then filed an appeal arguing:

Although Jintian and Mice had signed the Strategic Cooperation Framework Agreement, and Jintian had authorised Mice to be the exclusive retail outlet and its sole distributor, these only indicated that Mice had the right to sell exclusively the stock products purchased from VBI labelled with the relevant VS trade mark in China. From the chain of the sales of the stock, it could be seen that the entire business process did not involve any authorisation to use the relevant trade mark. No matter whether or not Mice was aware of the stock sales agreement, as the purchaser of the stock products, Mice only had ownership of this batch of products according to the law. That is, only the rights of possessing, using, handling, and making profit from this batch of products, and that did not mean that Mice was automatically licensed to use the relevant VS trade mark. Therefore, Mice could only use the trade mark for indicating its connection at the lowest necessary level for selling this batch of products.

Now, if anyone tells you that as you are selling only products and obtaining a service mark is a waste of money, you can quote him/her this case. The same is true for registering your trade mark in Chinese. Without these, Victoria's Secret might no longer be that exclusively secret in China, particularly in light of the practice of exhaustion of IP rights in China.

Finally, monetary compensation in trade mark cases, as in patent cases, may not be comparable to that in other countries, particularly for companies having no substantial business activities (no activities mean no profit, which in turn means no damage). Well, you still get an injunction and a public apology.

This article was published in the March 2016 (Note: this should be changed for future publications) issue of the UK Chartered Institute of Patent Attorneys (CIPA) Journal, and are re-posted here with the kind permission from the UK CIPA. The UK CIPA Journal covers updates, articles and case law reviews on IP in the UK, Europe, and around the world. The Journal is available for subscription at GBP130 per year, and for free by becoming a foreign member at GBP405 per year. For more information on the CIPA Journal please email editor@cipa.org.uk.