For multinational corporations operating in China, repatriating cash from their subsidiaries has always been an important but challenging issue.

China maintains a strict system of foreign exchange controls, meaning funds flowing into and out of China are tightly regulated. Other laws and regulations – such as the Company Law, relevant tax regulations, as well as China's transfer pricing rules – impose additional barriers to profit repatriation as well.

In this environment, businesspeople need to understand and incorporate a profit repatriation strategy from the very beginning to ensure access the profits earned.

There are several ways to repatriate profits from China. The most obvious method is for the company's China-based entity to pay dividends directly to its foreign parent company. However, this is subject to certain prerequisites.

As an alternative, many multinational corporations use intercompany payments, such as service fees or royalties, to remit cash from China. Other Chinese subsidiaries remit undistributed profits by extending a loan to a foreign related company with which it has an equity relationship.

Below, we introduce and analyze the pros and cons of each method to provide investor some initial references for their planning.

Remitting profits as dividends is the most direct and common way to distribute profits. However, this is subject to certain prerequisites, which are usually regarded as constraints.

First, a foreign invested enterprise (FIE) can only repatriate profit after its registered capital has been injected within the time limits as set out in the company's Article of Association.

Second, an FIE generally can only repatriate profit once a year after the annual audit and tax compliance process. This is to ensure a 25 percent Corporate Income Tax (CIT) had been paid up with regard to the profit to be distributed.

Third, no profits can be distributed before the losses accumulated in the previous years have been made up.

The FIE can only distribute dividends out of its accumulated profits, that is to say, the accumulated losses from the previous year must be more than offset by the profits.

According to relevant laws and regulations, the loss incurring in a tax year is deductible from corporate income before tax, and can be carried forward to the subsequent five years to be set off if the current year profit is not enough to make up the losses. After that, the loss still needs to be recovered before profits distribution, but it can only happen after tax clearance.

Fourth, not all profits can be repatriated after tax clearance.

For example, a wholly foreign owned enterprises (WFOE) has to place 10 percent of its annual after-tax profits into a mandatory surplus reserve fund until it reaches 50 percent of the FIE's registered capital. Besides, the investors usually allocate a portion of after-tax profits to the staff welfare and incentives fund, though these are not mandatorily required.

Finally, the dividend is subject to additional 10 percent withholding CIT when repatriating to foreign investors, with limited exceptions.

If a double tax avoidance agreement (DTA) is available, and the parent company qualifies as the beneficial owner, a preferential withholding CIT rate of five percent or even lower may apply.

And if non-resident enterprises decided to re-invest the dividends derived from FIEs into projects encouraged by the country, the withholding CIT on this part of the dividends can enjoy deferral treatments by fulfilling certain conditions.

Below, we take the WFOE as an example to demonstrate the tax implication and reserve requirements of repatriating profits by dividends. 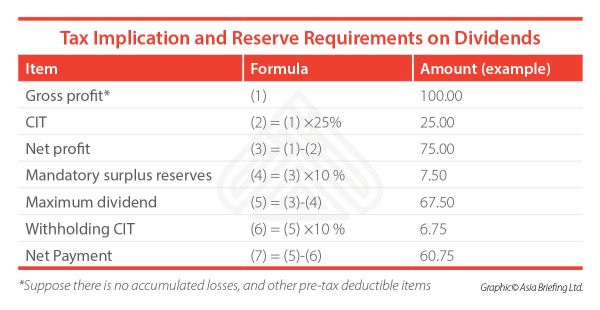 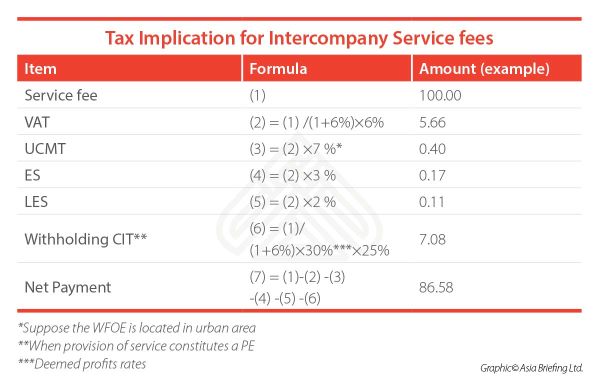 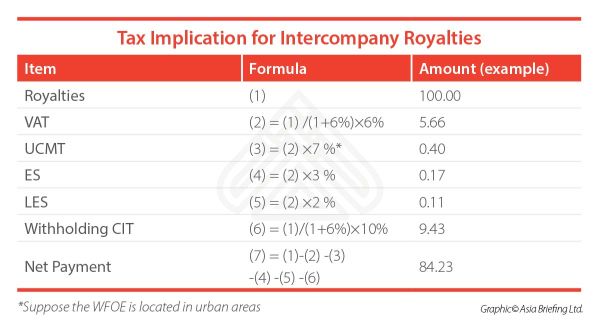 On September 29, 2018, the Ministry of Finance (MOF), State Administration of Taxation (SAT), National Development and Reform Committee (NDRC), and Ministry of Commerce (MOFCOM) jointly released The Notice on Widening the Scope of Application Regarding the Provisional Deferral Treatment for Withholding Tax on Distributed Profits used for Direct Re-investment by Foreign Investors (Caishui [2018] No.102, or Circular 102), as one of the measures to further promote foreign investment.

According to Circular 102, qualified non-resident enterprises can defer income tax as long as they reinvest equity investment incomes such as dividends and bonuses derived from resident enterprises directly into projects and sectors not prohibited by the country. Previously, only those re-invested into projects and sectors encouraged by the country are eligible for the deferral treatment.

Projects and sectors not prohibited by the country refer to those not listed as prohibited sectors as specified in the Special Administrative Measures (Negative List) for Foreign Investment.

Dividends and bonuses received by foreign investors on or after January 1, 2018 are eligible for the withholding tax deferral treatment and a refund for the tax already paid could be applied. Eligible foreign investors can also apply for the treatment retrospectively within three years from the date the tax payment was made and claim a refund.

When confronted with the constraints of remitting dividends, many multinational corporations attempt to repatriate profit from China via intercompany payments.

Often, they attempt to achieve this by charging for supporting services (such as human resources, information technology, or financing) or intangible assets (such as trademark, patent, or know-how) provided to Chinese affiliates.