The purpose of this article is to provide a brief guide as to the use of statutory demands (a 'Demand' or collectively 'Demands') in both the Cayman Islands and the British Virgin Islands (the 'BVI'). In particular, this article will seek to summarise the basic statutory requirements of Demands in both the Cayman Islands and the BVI, highlight some key differences between the use of Demands in both jurisdictions and provide an overview as to certain strategic considerations when a creditor is contemplating issuing a Demand or a debtor is responding to a Demand.1

What is a Demand?

In summary, a Demand is a formal written demand served by a creditor on a debtor for payment of a debt. If the debtor fails to:

it is at risk of having winding up proceedings commenced against it.

In both the Cayman Islands and the BVI, failure to satisfy a Demand: (i) gives rise to a presumption of insolvency;4 and (ii) is a ground upon which the Courts5 can make a winding up order against the debtor (collectively referred to as the 'Consequences').

B. Requirements of a Demand

Table 1 below shows a summary of the key statutory requirements of a Demand in the Cayman Islands and in the BVI.

If the creditor is confident as to the validity of its debt (which can, from an offshore perspective, often be governed by a foreign law and therefore require foreign legal advice), then, in both jurisdictions, a Demand can be a cost effective and useful precursor to a winding up petition, noting the Consequences that arise if the Demand is left unsatisfied. 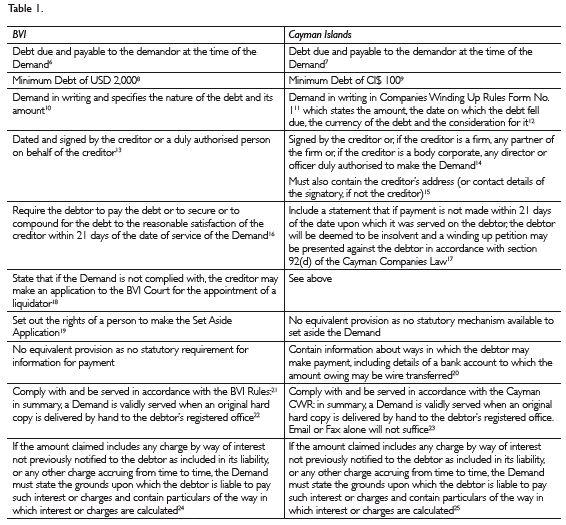 The primary benefits of issuing and serving a Demand on a debtor are:

However, irrespective of the above benefits, a Demand is, as a matter of both Cayman Islands and BVI law, not a necessary precursor to wind up a debtor and, in certain circumstances; it can delay a winding up order being made against a debtor. In summary, this is because the Demand can give the debtor an opportunity to make the Applications (usually on the basis that the debt is disputed – which we examine in greater detail in section D below) which could result in the creditor being stalled by litigation and not being able to progress the winding up proceedings in a timely fashion.

D. Strategic considerations when served with a Demand

As referenced above, upon being served with a Demand (and on the assumption that the creditor does not agree to withdraw the Demand), a debtor broadly has the following options:

In the event the debtor pays the debt in its entirety, secures or compounds the debt to the satisfaction of the creditor or reduces the debt below the statutory minimum requirements (as set out above) or obtains written confirmation from the creditor that the Demand is withdrawn, the matter is usually resolved. If the debtor seeks to challenge the Demand, it has the following options:

i Set Aside Application – BVI

When the Set Aside Application is filed at the BVI Court, the 21-day compliance period ceases to run from the date of filing.28 The BVI Court will set aside a Demand if it is satisfied that:

Additionally and in any event, the BVI Court retains discretion to set aside a Demand if it is satisfied that there would be substantial injustice because there is a defect in it or for some other reason.30

The Cayman Islands has no statutory mechanism in which a debtor can apply to set aside a Demand, as in the BVI.

Instead, the remedy available to a debtor is to promptly make the Injunction Application and either obtain an Injunction or Undertaking within 21 days from the date of service of the Demand. The Grand Court is likely to grant an Injunction preventing the presentation of a winding up petition if it appears that the debtor is solvent and that one of the following apply:

In essence, the debtor needs to show that the presentation of a winding up petition would be an abuse of process.

In the BVI the 'substantial dispute' test is on a statutory footing. In s. 157 of the BVI Insolvency Act the requirements are:

The leading case is Sparkasse Bregenz Bank AG and in the Matter of Associated Capital Corporation,32 in which the then Chief Justice said:

'the dispute must be genuine in both a subjective and objective sense... the reason for not paying the debt must be honestly believed to exist and must be based on substantial or reasonable grounds. Substantial means having substance and not frivolous, which disputes the Court should ignore. There must be so much doubt and question about the liability to pay the debt that the Court sees that there is a question to be decided. The onus is on the company to bring forward a prima facie case which satisfies the Court that there is something which ought to be tried.' The BVI Court of Appeal in the matter of Jinpeng Group Limited v Peak Hotels and Resorts Limited,33 recently clarified that it will undertake the critical task of considering whether or not there is a substantial and bona fide dispute.

The position in the Cayman Islands is broadly similar to the BVI: In Re Duet Real Estate Partners 1 LP (unreported, 7 June 2011), Duet sought a declaration that there was a genuine dispute in relation to its debts and an injunction to restrain the presentation of a winding up petition where the underlying loan agreement contained an arbitration clause and an arbitration had already been commenced. Having considered the evidence presented to the Grand Court, Jones J determined that there was no bona fide dispute of substance and that the arguments made by Duet in that regard were 'nothing more than a disingenuous delaying tactic'. He therefore refused to grant the declaration and injunction sought. Subsequently, in In re Ebullio Commodity Master Fund LP (unreported, 24 May 2013), Jones J took a similar position determining that the existence of an arbitration agreement and arbitration proceedings being on foot would only be relevant if the Cayman Court determined that the dispute was genuine and on substantial grounds.34

The Demand is an inexpensive and useful precursor to winding up proceedings, albeit, not necessary for the purposes of commencing winding up proceedings. However, it is important to be mindful of the tactics which can be employed by both a creditor in issuing a Demand and a debtor in responding to a Demand.

1 This article only considers Demands in respect of unsecured debt and in the context of corporate debtors (and not individuals). This article is intended for informational purposes only and does not constitute legal or other professional advice or an opinion of any kind.

3 Section 156 of the BVI Insolvency Act.

4 Section 8(1)(a) of the BVI Insolvency Act and Section 93(a) of the Cayman Companies Law.

7 Section 93(a) of the Cayman Companies Law.

9 Section 93(a) of the Cayman Companies Law.

ARTICLE TAGS
Cayman Islands Insolvency/Bankruptcy/Re-structuring Insolvency/Bankruptcy
POPULAR ARTICLES ON: Insolvency/Bankruptcy/Re-structuring from Cayman Islands
Amendments To The AIFMD And UCITS Framework Affecting Depositaries
Areti Charidemou & Associates LLC
The lack of consistency and variance in the degree of protection afforded to investors across the European Union, have raised concerns as to the efficiency of the existing AIFMD and UCITS...
Coronavirus (COVID-19): Considerations For Businesses, Directors And Lenders
Carey Olsen
This briefing looks at the potential impact of the coronavirus (COVID-19) on businesses and examines steps that can be taken ...
Mauritius Regulatory Update - February 2020
Appleby
This is the second in a series of Mauritius Regulatory Alerts in which we bring you an overview of the latest legal and regulatory developments in the offshore world, with a particular focus on Mauritius.
Dawn Of A Golden Era - UAE Declared As A Reciprocating Territory By The Central Government Of India
Clyde & Co
India and the United Arab Emirates (‘UAE') have witnessed dynamic bilateral relations in the recent past. Leadership of both countries have endeavoured to bolster ties of the two economies which...
Debt Restructuring Under IFRS 9: Changes You May Have Missed
KPMG Luxembourg
IFRS 9 has now been applicable for over a year, but some of its changes have often been either overseen or neglected—even when they could have a material impact on the accounts.
Overview: Debt To Equity Conversions
STA Law Firm
In these investment scenarios, there are times when an organization needs more money than is as of now being produced by its activities; it has two different ways to get it.
FREE News Alerts
Sign Up for our free News Alerts - All the latest articles on your chosen topics condensed into a free bi-weekly email.
Register For News Alerts
Article Tags
Cayman Islands Insolvency/Bankruptcy/Re-structuring Insolvency/Bankruptcy
Related Articles
Caribbean Legal Update – Appeal Decisions By The Judicial Committee Of The Privy Council ("Privy Council") In London Bedell Cristin Cayman Partnership
Caribbean Legal Update - The Judicial Committee Of The Privy Council ("Privy Council") In London Bedell Cristin Cayman Partnership
Walkers Special Issue 2019 – International Corporate Rescue Walkers
Chambers Insolvency 2019 Second Edition Guide: Cayman Islands Campbells
Carey Olsen Launches BVI And Cayman Litigation Practice In Singapore With Lateral Partner Hire Carey Olsen
Comparative Guides
FinTech
Trademarks
Mondaq Advice Centres
Global
Trademarks in SAARC Countries
Offshore
Asset Management & Investment Funds
Global
Investment Immigration
More MACs
Upcoming Events
Mondaq Social Media