by Walkers
Walkers
0 Liked this Article
To print this article, all you need is to be registered or login on Mondaq.com.

From our vantage point as advisers to many of the world's top investment fund managers and financial institutions, broad market forces flow through to our instructions, and ultimately drive many of the terms of the funds we advise.

In this four-part series we look at the current themes we have noticed in the investment funds market. Parts one and two focus on Hedge Funds and parts three and four explore Private Equity.

All data, unless referenced, is taken from Walkers' in-house investment funds survey.

North America remains the most significant target area for investments. Global geographical strategies also remain popular, as managers focus on specific industries and sectors rather than the home jurisdiction of potential acquisitions.

Asia focussed funds remain extremely popular, so much so that Asia seems to be quickly shedding its emerging markets tag. Latin America has had a slower year but there are signs of activity with respect to Africa focussed funds for US managers. European strategies by contrast remain less active, as uncertainty caused by events such as the Brexit vote remains a tangible concern. 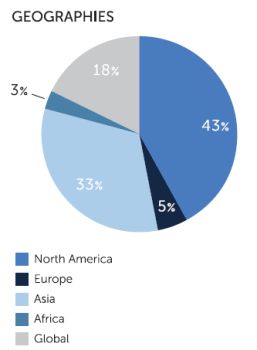 One trend that has been evident from the data is a lengthening of fund terms: we have been seeing this reflected in term extension provisions, which provide for a greater number of additional extension periods, with lower levels of consent. This year we have also seen the most common initial, pre-extension, term switch up from 5-7 years to 7-10 years (however, it should be noted that Asia-focussed funds continue to have initial term lengths of around five years). 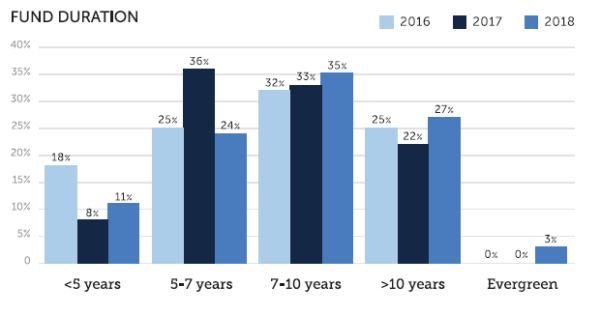 This change in the most prevalent term length is in addition to the continuing ability of general partners, with varying levels of consent, to extend the terms of their funds, typically for two one-year periods, but also for three or four one-year periods, or even for an indefinite number of years.

Following naturally from the ability to indefinitely extend terms, and possibly in part inspired by the success of Berkshire Hathaway, we have seen permanent capital private equity funds make it to market which are long-dated to allow managers to pursue and seek to make truly transformative changes in their underlying portfolio companies, with the aim of maximising value for investors on an exit.

Investors appear to be more willing to work with managers as their trusted advisors to hold investments for lengthier durations. This collaborative approach is also reflected in a widening of the investment periods of funds.

It is well published that there is still significant dry powder in the market, and finding and executing high quality investments in such a competitive arena remains a challenge. Investors are allowing managers longer to find and close the kinds of investments which will generate the best returns for their portfolios, notwithstanding that such returns may be a few years later than has traditionally been the case. 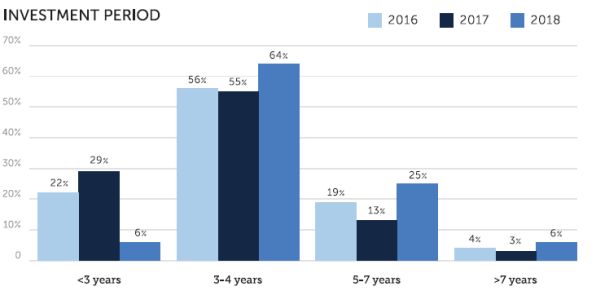 The "two and twenty" fee model has been the accepted norm for a significant time. However, managers, especially those raising their first funds, face increasing fee sensitivity from investors and concessions are now often reflected in side letter rebates: indeed for certain funds, carry allocations are calculated on an investor by investor basis, with rates set out solely in side letters rather than in the partnership agreement. Our data suggest, however, that managers and investors are working on slightly more innovative approaches to performance allocations.

While 20% remains the most common carried interest entitlement percentage, there is some activity on either side of that mark. We have disregarded Cayman funds showing zero carry: this typically reflects their place in fund structures where carry is taken at a different level, often a master fund domiciled outside of Cayman. Interestingly, we have seen an increase in rates which are lower than 20%. The most obvious explanation at face value is that this is reflective of fee pressure on managers, but a closer dive into the data and the fund documents suggest that a little more creativity is in play.

While 8% remains the most usual hurdle rate, there has been an increase in alternative preferred return requirements: looking at the underlying partnership agreements, lower hurdle rates are typically matched by a lower carried interest entitlement. Similarly, we have seen greater activity in 20% plus percentages, however these are tracked by higher preferred returns, delaying the point at which carry entitlements arise but promising greater rewards if the fund generates the higher returns. 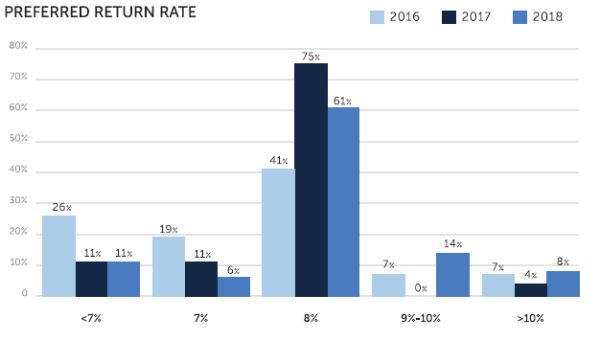 Management fees have remained at around the 2% mark, albeit with some deviation downwards.

In general, therefore, while "two and twenty" is still king, we are seeing some flexibility in the market, particularly in assessing performance rewards. This demonstrates the continued willingness of managers and investors to collaborate in creating tailored fund structures designed to satisfy as many competing interests as practicable.