by Yvan G. Larocque and Carson Bell
Miller Titerle + Company
Your LinkedIn Connections
with the authors

On August 26, 2020, the U.S. Securities and Exchange Commission ("SEC") expanded the definition of who qualifies as an Accredited Investor. Placing new emphasis on knowledge, experience, and Indigenous sovereignty, the SEC has extended participation in the private equity market to a new groups of investors. For Canadian corporations, this means a new way to raise capital without having to file a lengthy prospectus.

Adopted in 1982 in the U.S., and subsequently by Canada in the early 2000s, the Accredited Investor exemption allows corporations to offer and sell securities to certain entities and individuals who qualify, without the need to file a prospectus with securities regulators. Premised on the assumption that these investors are sophisticated enough not to require the protection of security regulators, corporations are free to offer and sell securities to Accredited Investors without having to meet standard disclosure requirements. With that being said, this pathway into the exempt market has long been criticized.

Specifically, regarding the "individual" category of the exemption, critics argued that the Accredited Investor exemption was based on excessively burdensome financial criteria. Under the former Accredited Investor Exemption in the U.S., and the current exemption in Canada, individuals must meet certain income or asset thresholds in order to qualify. While some have maintained that these thresholds are too low, others argued that an individual's financial position should not be used as an indicator of sophistication. As noted in the Canadian Securities Administrators Staff Consultation Note published in 2011,

Some Stakeholders have suggested that income and asset thresholds are not adequate proxies for sophistication. Individuals may have significant wealth, but may lack investment or other experience that enables them to make an investment decision without the protections afforded by a prospectus offering.1

Another criticism of the Accredited Investor exemption was that it failed to recognize Indigenous governments located in the U.S. as accredited investors; failure to do so is alleged to have eliminated an important source of funding for Indigenous-sponsored venture capital and private equity firms.

In response to these, and other concerns, the SEC amended the Accredited Investor exemption to recognize knowledge, experience and Indigenous sovereignty as factors worthy of consideration. In a press release by the SEC, the Chairman, Jay clayton, stated:

For the first time, individuals will be permitted to participate in our private capital markets not only based on their income or net worth, but also based on established, clear measures of financial sophistication. I am also pleased that we have expanded and updated the list of entities, including tribal governments and other organizations, that may qualify to participate in certain private offerings.

Below we briefly outline the former U.S. Accredited Investor exemption compared to that of Canada, how it has changed, and what this means for Canadian corporations moving forward.

As illustrated in the table below, prior to August 26, 2020, the definition of Accredited Investor in the U.S. and Canada was similar. It is worth noting that both the U.S. and Canada have not updated their income and asset-based thresholds for individuals since their adoption. 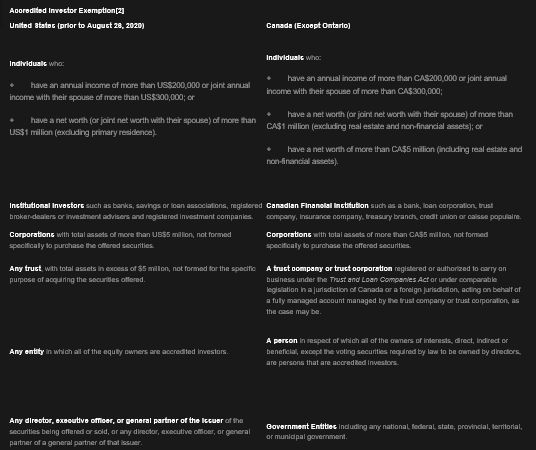 The SEC has amended the definition of Accredited Investor to recognize additional categories of entities and persons. Unlike Canada, the SEC now recognizes natural persons who possess certain professional knowledge as well as Indigenous governments with sufficient resources as Accredited Investors. Below we briefly summarize the key amendments to the U.S. Accredited Investor exemption.

The amendment also now allows "knowledgeable employees" of a private fund to qualify as accredited investors.

Under the amendments, a "knowledgeable employee" has the same definition as in Rule 3c-5(a)(4) of the Investment Company Act3. This includes, among other persons: (i) executive officers,2 directors, trustees, general partners, advisory board members or persons serving in a similar capacity of a Section 3(c)(1) or 3(c)(7) fund, or affiliated persons of the fund who oversee the fund's investments; as well as (ii) employees or affiliated persons of the fund (other than employees performing solely clerical, secretarial or administrative functions) who, in connection with the employees' regular functions or duties, have participated in the investment activities of such private fund for at least 12 months.

Individuals who do not possess the knowledge, experience, or certifications described above are still able to qualify for the exemption under the former income and asset-based thresholds. Although critics continue to argue that these thresholds are too low, the SEC declined to change these limits stating that doing so is not required to better protect investors. Instead, the SEC has added the term "spousal equivalent" to the accredited investor definition so that spousal equivalents may pool their finances for the purpose of qualify as accredited investors. The SEC defines "spousal equivalent" as a cohabitant occupying a relationship equivalent to a spouse. Although some may argue that this effectively lowers the income and asset based thresholds, it appears as though the SEC is simply putting couples who have chosen not to tie the knot on equal footing with those who have.

Indigenous Governments and Other Entities Holding $5 million in Assets

Notably, the amendment now includes "any entity... owning investments in excess of $5 million that is not formed for the specific purpose of acquiring the securities offered". Qualifying Indigenous governments in the U.S. that own "investments", as defined in Rule 2a51-1(b) under the Investment Company Act, can now use the Accredited Investor exemption to participate in private equity offerings.

The amendment also now defines any "Family Office" as defined in Rule 202(a)(11)(G)-1 under the Investment Advisers Act of 1940, as an Accredited Investor as long as the "Family Office":

Additionally, a "Family Client" of a family office that meets the definition above, and whose investments are so directed, will also meet the definition of an accredited investor.

Although the above changes to the U.S. Accredited Investor exemption may not seem ground-breaking, it is certainly a departure from the same exemption in Canada. The amendment represents a signal to other countries, including Canada, to take a second look at who should and should not require protection under securities legislation. Although there is no indication that Canada is primed to change our definition of who qualifies as an Accredited Investor, Canadian corporations should be on the look out for upcoming proposed amendments.

At the very least, the U.S. amendment increases the size of potential investors Canadian corporations can solicit without having to prepare and file a pesky prospectus (subject to US securities laws).

2 Please note this table is not a complete representation of the Accredited Investor Exemption in the United States prior to August 26, 2020 or Canada.