by Canadian Energy Perspectives , Jamie Gibb , Kerri Howard , Kimberly Howard and Ashley Wilson
McCarthy Tétrault LLP
Your LinkedIn Connections
with the authors
To print this article, all you need is to be registered or login on Mondaq.com.

Over the past year, Alberta's energy industry has continued to be the central focus for the Province with an emphasis on innovation and diversification. In 2020, Canada faced the largest public health crisis in a century, the worst global economic crisis since the 1930s and a crippling collapse in energy prices. In response to the downturn, the Government of Alberta released a Recovery Plan in June 2020. The Province committed to diversifying Alberta's energy industry through a number of strategies and regulations which include: (i) Alberta's Natural Gas Vision and Strategy which lays out a plan for the Province to become a global supplier of clean, responsibly sourced natural gas, which includes the supply of hydrogen; (ii) a new mineral strategy to optimize Alberta's resource potential, including lithium; and (iii) the introduction of Bill 36, the Geothermal Resource Development Act, to establish a regulatory scheme for the development of geothermal resources.

Alberta's generation mix is expected to undergo a major shift as federal and provincial policies drive the retirement of all coal-fired generation by 2030. The Alberta Electric System Operator ("AESO") forecasts that coal will be replaced with a mix of natural gas generation and renewable energy. Alberta's merchant power market presents a unique opportunity for innovation and investment in clean energy in the Province through its many features, including the carbon market, power purchase agreements and government incentives targeted at moving toward a greener and diversified economy.

Throughout 2020, the ongoing effects of COVID-19 and low oil prices caused significant disruption to Alberta's electricity industry and the economy more broadly. The AESO indicates that load at behind-the-fence ("BTF") industrial sites, which are primarily oil and gas related facilities, began to decline due to persistently low oil prices, and in August, Alberta Internal Load ("AIL") hit its lowest levels at 950 MW, 10% below weather adjusted normal. According to the Market Surveillance Administrator ("MSA"), 2020 had the highest amount of supply surplus of any year in the last 20 years. Q3 2020 observed 1,865 minutes of supply surplus; the previous high was 231 minutes in Q3 2012. 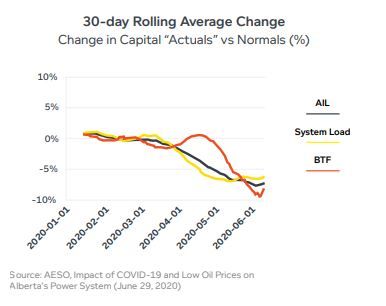 In August 2019, the AESO released its Energy Storage Roadmap setting out a plan to facilitate the integration of energy storage technologies into the AESO's Authoritative Documents and the AESO's grid and electricity market. Highlights of the regulatory initiatives undertaken in 2020 to implement energy storage into Alberta's grid are discussed in detail in our storage article at page 69 of this publication.

The AUC identified certain emerging trends and innovations in Module One, which concluded on November 15, 2019.

" Notably, the AUC found that there was greater customer choice and control over electricity consumption, and Alberta's electricity market had become more competitive. "

Modules Two and Three both concluded on July 15, 2020. Module Two examined the interplay between the trends identified in Module One and certain forces affecting existing distribution utilities: changing consumer preferences, service prices, taxes, subsidies and government incentives aimed at consumer behavior. The resulting discussion included which distribution utility services ought to be regulated, the related implications for the monopoly franchise and the obligations to serve, and to what extent (if any) new entrants should be regulated by the AUC.

The DSI was conducted by way of a series of information requests and written submissions. The final DSI report, which has yet to be published, is expected to set out a regulatory framework intending to facilitate efficient outcomes in Alberta's utilities market.

DCG reduces strain on the system by displacing power that would otherwise have to be imported by distribution facility owners ("DFOs") from the transmission system. DCG reduces congestion, lowers line losses and enhances system reliability by having generation located closer to consumers.

Several DFOs' tariffs give a transmission-based credit to large-scale DCG providers for the electrical energy they supply to the distribution system.

The future of DCG credits has been uncertain since the AUC's 2018 ISO Tariff Decision issued on September 22, 2019. In this proceeding, the AUC noted evidence of a cross-subsidy resulting from DFOs being required to provide credits to DCG providers but not receiving any corresponding benefit. DFOs recover the cost of DCG credits by passing transmission costs on to load customers, meaning that, in effect, load customers are forced to subsidize the cost of DCG. 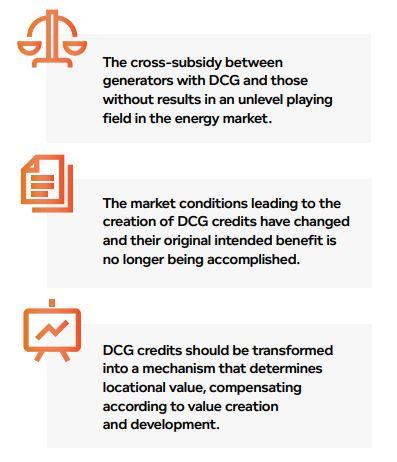 In early March 2021, the AUC is set to hear AUC Proceeding 26090 which will consider whether DCG credits shall continue to be implemented in a distribution utility's tariff. Currently, through their respective utility tariffs, each of FortisAlberta Inc., ATCO Electric Ltd. and ENMAX Power Corporation offer DCG credits. The AUC intends to decide this matter for all distribution tariffs and the AUC currently anticipates its determination in this proceeding will affect each of ATCO Electric, ENMAX and FortisAlberta as well as their customers, and the owners and operators of DCG units that receive benefit from DCG credit mechanisms.

DCG credits do not operate in a vacuum - they are intertwined with a number of other tariff, transmission and distribution system planning issues. It is within the context of these broader policy considerations that the fate of DCG credits will be determined. The future of DCG credits will likely be borne through the result of regulatory and distribution tariff proceedings, such as AUC Proceeding 26090, and the industry and market participants can likely expect the final DSI report to provide a regulatory framework which is intended to achieve competitive market outcomes.

Following the AUC's Decision 25848-D01-2020 (the "Decision") in late December 2020 varying Decision 2294-D02-2019, lenders and project developers within Alberta can expect impacts to connection costs for DCG projects. The Decision approved the AESO proposed adjusted metering practice and use of the substation fraction methodology to allocate the costs of interconnection facilities that may have joint use as part of the 2018 independent system operator ("ISO") tariff.

Highlights of the material findings and outcomes include:

Noteworthy, and what will likely be carried forward to future decisions considering cost allocations, is the AUC's confirmation of the principle (established in AUC Proceeding 25101) that following energization, costs should not be allocated to a DCG if the DCG has not directly caused those costs. In other words, costs should be borne by the party benefitting from the connection project.The full effects and impacts of the Decision will be understood in the coming months.

The AESO's required compliance filing to effect the Decision was filed on January 11, 2021. DFOs must file reports by March 31, 2021, setting out the details of all resolutions and outstanding disputes pertaining to DCG flow-through matters.

In fall 2019, on behalf of the Alberta Department of Energy, the AUC issued Bulletin 2019-16 launching consultation on the issue of power plant self-supply and export. In the first round, the AUC sought stakeholder input on the following options for addressing the selfsupply and export issue in the future:

In the second round of engagement, the AUC asked stakeholders to provide comments on the market and tariff implications of unlimited power plant self-supply and export.

On June 5, 2020 the AUC provided the Department of Energy with a discussion paper which summarized the views of market participants on how best to address the issue of power plant self-supply and export going forward.

The discussion paper recommends that regardless of which option the Province decides to implement, the statutory scheme should be amended to clarify the circumstances in which self-supply and export is expressly permitted to ensure regulatory certainty for stakeholders. Before the AUC can effectively address the tariff issue, the Department of Energy must decide, from a policy perspective, whether it wishes to allow self-supplying generators that do not otherwise qualify as an industrial system designation ("ISD") to self-supply and export.

Until the Department of Energy provides further direction, uncertainty remains for co-generation and industrial systems across the Province. It is anticipated that relief in the form of statutory amendments or new AUC rules may be on the horizon in 2021.