Canada: The First Three Months Of The SCC Leave Project: A Successful Start

Since we've launched, we've heard two questions. First, how does the model perform? Second, it's a neat idea, but is it actually useful? This blog post answers those two questions.

HOW DOES THE MODEL PERFORM?

The easiest way to evaluate the performance of our model is by looking at how different categories of predictions turned out. If you've been following our model, you know that we group leave application cases into four categories, depending on their predicted probability:

So how did our predictions do relative to the outcomes? Essentially spot on: 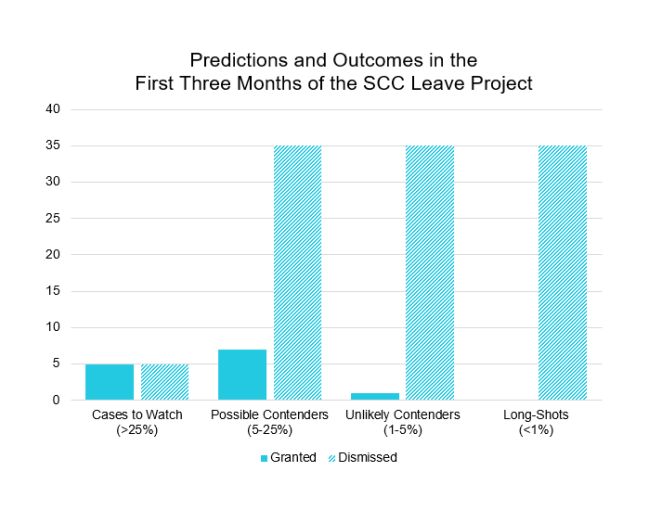 For each of the four categories of predictions, the proportion of cases that got leave was roughly in the middle of the predicted probability range. This is exactly what you'd expect in a model performing accurately: on average, over its first three months of its performance, the predictions of the model were spot on.

IT'S A NEAT IDEA, BUT IS IT ACTUALLY USEFUL?

Yes. 100%. Our model is useful for any client considering whether it's worth the time, effort, and cost of seeking leave to the Supreme Court of Canada.

Any lawyer advising their client on the likelihood of a successful leave application will tell their clients that most leave applications are unsuccessful. Our data shows that over the last few years, only 7% of leave applications are successful. However, for most clients considering a Supreme Court leave application, they also have to think, to use a poker concept, about the "pot odds" of a leave application. What that means, put simply, is that it can make sense to take a bet on a low probability outcome if the cost is relatively low and the potential benefit is relatively high. Take a typical civil or commercial case where a client is considering a leave application: by that point, the client has already gone through a contested trial or application as well as an appeal, representing years of time and effort. If they're applying for leave, they've been unsuccessful below. That means they have either not received money they think they should have (if they're plaintiffs) or been ordered to pay money that they think they shouldn't have (if they're defendants). They have also probably been ordered to pay costs. That means that they may have the potential to gain quite a bit from a successful leave application. That's why clients in so many cases (several hundred per year, in recent years) are willing to take a shot at a leave application, despite the low chances of getting leave.

While most clients understand that leave applications are an uphill battle, what they want to know is whether they have a decent shot at getting leave, or whether their case has very little chance. Rational clients may be willing to take a chance on a case with a decent shot, but not be willing to spend the time and money on a complete long-shot. That's where the model's predictions come in handy: the model provides an easy and objective way of distinguishing between those.

As an example, imagine we take the threshold for a case having very little chance as anything below a 5% chance. Among the 71 cases with a predicted probability below 5%, only one got leave (1.4%). That seems pretty hopeless. By contrast, among the 52 cases with a predicted probability above 5%, 12 got leave (23%). That's by no means a certainty, but the odds are likely good enough to justify the cost of bringing a leave application. By quickly classifying a case as having either a decent chance or a very low probability, the model allows clients to make an easy and informed decision as to whether to seek leave or not, with limited work needed to reach that conclusion.

One comment we've heard is that the model isn't useful, because a sophisticated lawyer can already give their client a sense of the likelihood of getting leave. No doubt, there's value in having a skilled and experienced lawyer to advise you, and the model can't and doesn't intend to replace that legal advice. But it can complement conventional legal advice in various ways.

We see four important ways that the model can complement legal advice.

Will the model replace lawyers? No. And it was never meant to. But it does provide a valuable complement: a good lawyer and the model, working together, will provide better advice at lower cost than conventional legal advice alone.