Canada's fight against forced labour and human rights abuses could soon grow more vigorous than ever, thanks to new legislation to address these issues within corporate supply chains.

The introduction of Bill S-211, An Act to enact the Fighting Against Forced Labour and Child Labour in Supply Chains Act and to amend the Customs Tariff (the Bill) aims for greater transparency by forcing businesses with any connection to Canada to disclose the measures actively taken to reduce the risk of forced or child labour within their supply networks. Since its first reading in Nov. 2021, the Bill has garnered ample support and could soon come into force, in fact as early as 2023.

The new legislation expands on previous transparency obligations pertaining to forced labour risks, including extant legislation in Australia, the United Kingdom, and France. Canadian businesses need to remain aware of the reporting obligations outlined in such bills, including Bill S-211, and understand how the legislation is evolving globally.

According to the International Labour Organization (ILO), forced labour represents any form of "work that is performed involuntarily and under the threat of any penalty." Forced labour is a type of modern slavery and may include child labour, human trafficking, and various forms of coercion such as debt bondage, retention of identity papers or threats of denunciation (to immigration authorities, for instance).

Reports from the Minderoo Foundation indicate that around 40.3 million individuals were victims of modern slavery in 2016, with an estimated 17,000 victims based in Canada. The ILO calculates that just under 25 million people are involved in some form of forced labour globally, meaning that companies involved in retail or manufacturing who neglect to inspect their supply chain are likely exploiting forced labour at some level.

A number of global legal approaches have developed to address the impact of forced labour risks on companies. They include, in various proportions, elements that belong to:

These approaches have undergone four generations of development, as countries learn from each legislative wave and refine their methods.

The United Kingdom and Australian Modern Slavery Acts use reporting requirements for addressing risks related to modern slavery and human trafficking, and both have set restrictive labour rights related to the ILO's guidelines. In Canada, the Bill also remains labour-focused instead of targeting a broader form of human rights, but it ventures further than the Modern Slavery Acts through its requirements and sanctions.

The United Kingdom Modern Slavery Act drew criticism regarding the vague criteria applied to identifying companies required to publicly report on potential ESG risks; it was also felt that little was done to broadcast the identity of non-compliant enterprises. The Australian Modern Slavery Act, in comparison, does include provisions to publicly identify companies that fail to report. Canada's Bill S-211 improves on the United Kingdom's identification issues by forcing companies listed on the stock exchange or meeting other specific criteria to conduct reports. While targeted entities will be required to publish their reports online, this will be done on their own website, and in the absence of a public repository it may yet remain difficult to identify non-compliant entities.

Both Modern Slavery Acts have been criticized for their lack of enforcement, although companies can accrue significant fines for publishing misleading statements under the Australian legislation. Bill S-211 goes further by engaging directors' liability, boosting regulatory and investigative powers, and leveraging substantial fines in case of non-compliance.

Unlike the United Kingdom and Australian Modern Slavery Acts, France's Duty of Vigilance Act considers all human rights in businesses' ESG reports and requires that companies publish plans to identify and mitigate human rights risks and impacts. Compliance with such plans is enforced through civil rights of action, as well as administrative and criminal penalties. France's act remains one of the most severe pieces of forced labour legislation at the moment, years after coming into force. Currently, Bill S-211 does not go so far as France's Duty of Vigilance Act. While the Bill has much support in its current form, it remains to be seen whether that support would hold or falter were the federal government to introduce amendments seeking to put it on par with the French model. 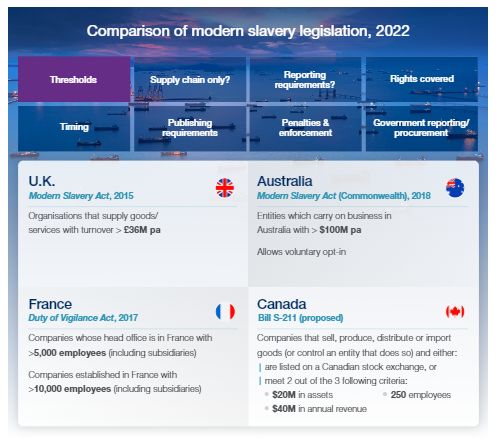 As mentioned above, North American forced labour legislation closely aligns with requirements laid out in the CUSMA, and Canada's Customs Tariff Act now prohibits the importation of goods produced through forced labour through customs bans, soon to include child labour specifically, thanks to the Bill. The federal government still faces pressure from the United States to apply more stringent enforcement measures regarding forced labour importations, and future Canadian enforcement action may be more akin to American efforts against forced labour.

Bill S-211, forced labour and the Canadian legal landscape: the next steps

The Bill passed in the Senate and is currently in committee at the House of Commons. It must undergo a third reading before earning royal assent, and given its continued support from Canadian citizens and political parties, it could come into force as early as early 2023.

Canadian businesses would benefit from gaining a deeper understanding of the Bill and its implications to ensure that their operations, supply chains and reputation remain unmarred by preventable forced labour risks. It is critical to note that supply chain mapping and due diligence cannot happen overnight; it is a time-consuming and iterative process. In order to be ready by the time Bill S-211 enters into force, businesses will need to be proactive.

BLG can guide Canadian businesses through a supply chain audit, review internal compliance policies and standard operating procedures, provide advice on supply chain ethics and how to prepare for Bill S-211, and advise on investigations undertaken by the CORE. Reach out to any of the key contacts below for assistance.

The author would like to thank Adam Rudder, Summer Law Student, for his generous contribution to this text.