by Goodmans LLP and David Rosner
Goodmans LLP
Your LinkedIn Connections
with the authors
To print this article, all you need is to be registered or login on Mondaq.com.

Bill C-25 (the "Bill"), which contains technical fixes to the affiliation and notification rules under the Competition Act (the "Act"), has become law. As a result of the Bill:

The Act contains complex rules that require the Competition Bureau be notified of different types of transactions that exceed specified thresholds. These rules contain inconsistencies about how they apply to different types of transactions and how the thresholds are to be applied. For example, where a corporation's shares are more than 50% owned by a second corporation, those two corporations are "affiliates" under the Act. However, where a partnership's interests are more than 50% owned by a corporation, the partnership and the corporation are not "affiliates" under the Act. Before the Bill, therefore, the requirement to notify the Bureau of a transaction was sometimes a function of whether a corporation versus a partnership was involved in that transaction. In addition, under the old rules trusts were not affiliated with corporations and partnerships, even if a trust controlled such entities.

On May 1, 2018, the Bill (known formally as An Act to amend the Canada Business Corporations Act, the Canada Cooperatives Act, the Canada Not-for-profit Corporations Act, and the Competition Act) received Royal Assent and entered into force. The Bill introduces the concept of an "entity", which includes all types of business organizations, including corporations, partnerships, sole proprietorships, trusts or other unincorporated organizations capable of conducting business. The Bill then amends the Act's affiliation rules by creating a single set of rules for affiliation for all types of entities (replacing separate affiliation rules for different types of entities).

Before the Bill, large mergers and acquisitions could avoid notification in certain circumstances if partnerships were utilized. As a result of the Bill, these transactions will now be subject to notification (as they would have been previously if they involved corporations). For example, consider the acquisition by a partnership described in Figure 1, below. Assume the Target has revenues in Canada of $100 million, ParentCo has revenues in Canada of $1 billion, and the Acquirer (which ParentCo established for the purposes of implementing the transaction) has revenues of $0. Before the Bill, ParentCo and the Acquirer are not affiliated, and therefore ParentCo's revenues are not taken into account when applying the applicable thresholds; the consequence of a lack of affiliation is the transaction is not notifiable. As a result of the Bill, ParentCo and the Acquirer are now affiliated, and ParentCo's revenues are taken into account when applying the thresholds; the transaction is notifiable (as it would have been before the Bill if the Acquirer were a corporation instead of a partnership). 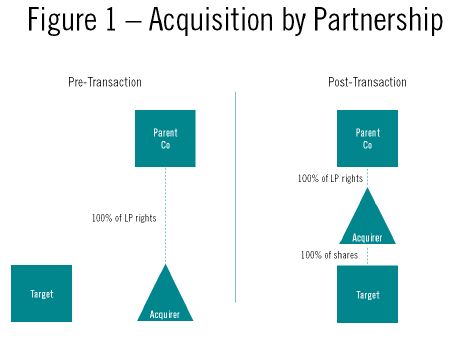 By further example, consider the internal reorganization involving partnerships in Figure 2, below. Assume LP2 has revenues in Canada of $1 billion. Before the Bill, ParentCo and LP1 are not affiliated, and therefore the illustrated re-organization transaction (essentially, ParentCo's acquisition of LP1) is subject to notification. The Bureau would therefore be notified of a transaction that has no competitive consequence (since no two businesses are "merging"). As a result of the Bill, ParentCo and LP1 are now affiliated, and therefore the re-organization is exempt from notification. 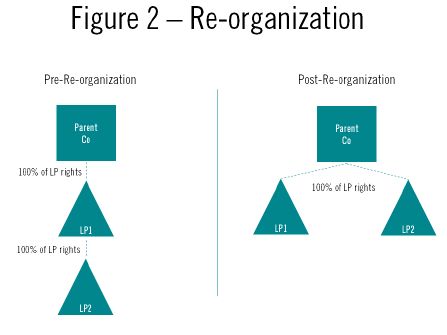 Overall, the Bill makes the Act's notification rules more "transaction neutral" and predictable in their application.