The correct application of the transition provisions in Ontario's new Construction Act has, in certain circumstances, stimulated robust debate and perhaps a little confusion.  One such circumstance respects the construction of improvements on premises subject to leasehold interests.  There is a certain silence in the Construction Act's transition provisions surrounding leaseholds that may leave some wondering whether the new Act or the old Construction Lien Act applies to their leasehold construction projects.  In this article, we identify this silence and the correct interpretive way forward.  We also provide a decision-tree to show which Act applies to the construction of improvements subject to leasehold interests.

The profound changes to Ontario's old Construction Lien Act took effect in two stages.  The first stage respected a modernization of the old Act.  Among other things, monetary thresholds increased, the rules respecting the release of holdbacks changed, timelines for the expiry of liens were extended, and the old Act was renamed the Construction Act.  This first stage became effective on July 1, 2018.  The second stage respected the ushering in of the revolutionary prompt payment and adjudication regimes. This second stage became effective on October 1, 2019.

(a)     each stage of the new Act is to apply only to relationships that commence after the applicable effective date; and, correspondingly,

(b)     the old Act continues to apply to relationships already existing at the time of the applicable effective date.

In practice, however, the application of this simple idea has proved complicated – particularly in relation to leases.  More than construction contracts and procurement processes, leases pose a particular challenge because many of them provide for relationships that extend decades into the future.  Applying the simple idea behind the transition provisions to such lengthy leasehold relationships accordingly yields an undesirable result – that is, the old Act would continue to apply decades from now.

To avoid such a result, the framers of the Construction Act made specific provision for leasehold interests entered into before July 1, 2018 in the new Act's transition provisions for the first stage (i.e., for the modernization changes).  Section 87.3(1) of the new Act provides that the old Act will still apply if any of the following three criteria are satisfied:

(a)     a contract (i.e., a contract directly with an owner of the premises) for the improvement was entered into before July 1, 2018;

(b)     a procurement process for the improvement was commenced by the owner of the premises before July 1, 2018; or

The Act is, however, silent in respect of leases entered into on or after July 1, 2018.  So how are we to understand application of these transition provisions to such leases?

Like any legislation, the Construction Act is to be interpreted according to its plain and ordinary language.  As such, the new Act's silence in relation to leases dated July 1, 2018 and thereafter means that such leases receive no special treatment under the Construction Act.  Accordingly, where improvements are constructed on premises subject to leases dated July 1, 2018 and thereafter, the old Act will continue to apply to them where the criteria in subparagraphs (a) and (b) of section 87.3(1) (noted above) are satisfied.  The new Act will otherwise apply to such leases.

(b)     a procurement process for the improvement that is the subject of the contract was commenced by the owner of the premises before October 1, 2019; or

(c)     a subcontract made under a contract referred to in subparagraphs (a) or (b) immediately above.

These second stage transition provisions apply equally to premises subject to leaseholds and those that are not.

The following decision-tree demonstrates which Act applies to a lease given the date of the lease, the dates of applicable contracts and procurement processes, and whether the prompt payment and adjudication regimes apply.  We hope you will find the decision-tree a helpful tool to cut through the silence surrounding leasehold interests and prevent you from getting lost in transition. 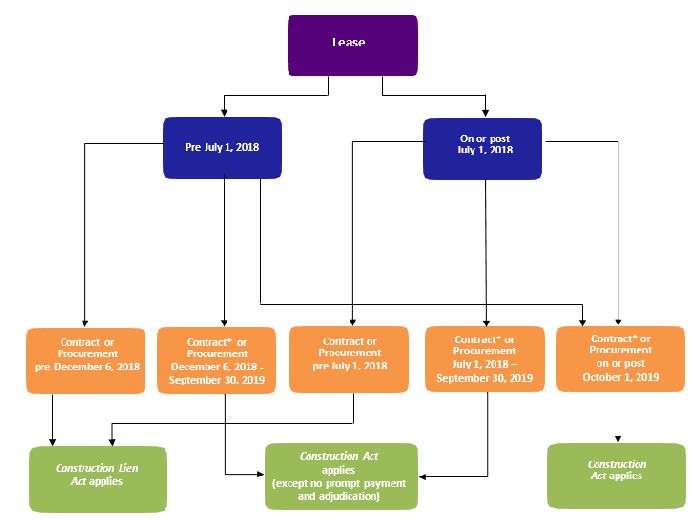 The foregoing provides only an overview and does not constitute legal advice. Readers are cautioned against making any decisions based on this material alone. Rather, specific legal advice should be obtained.

ARTICLE TAGS
Canada Government, Public Sector Government Contracts, Procurement & PPP Real Estate and Construction Construction & Planning
POPULAR ARTICLES ON: Real Estate and Construction from Canada
COVID-19: Commercial Leasing Considerations
WeirFoulds LLP
The coronaviruses are a large family of viruses that can cause illnesses ranging from the common cold to more serious respiratory infections. COVID-19 is a form of coronavirus that causes a ...
Tips For Commercial Landlords And Tenants In Navigating The COVID-19 Crisis
Minden Gross LLP
COVID-19, the coronavirus dominating headlines in recent weeks, has become a global pandemic. In the past 72 hours there has been increasing concern as to the extent of the pandemic.
COVID-19: Time To Check Your Construction Contract's Force Majeure Clause
WeirFoulds LLP
If you are considering submitting a claim in respect of delays caused by the COVID-19 outbreak, or if you have already received notice in respect of the same by contractors or suppliers, it may be worthwhile to consider ...
Back To Basics: Top Ten Tips To Run A Condo Board Meeting
Miller Thomson LLP
Board meetings often have much to address within time constraints and all Board members play a key role in maintaining focus on efficiencies and productivity.
Coronavirus And Condominiums — March 12, 2020 Update
Fogler, Rubinoff LLP
Given the widespread public concern relating to coronavirus (COVID-19), which the World Health Organization has now declared to be a pandemic, we are writing to address some condominium specific...
Is Coronavirus A Force Majeure Event Under Your Project Contract?
Osler, Hoskin & Harcourt LLP
Examine whether the novel coronavirus disease (COVID-19) is a force majeure event under your project contracts.
FREE News Alerts
Sign Up for our free News Alerts - All the latest articles on your chosen topics condensed into a free bi-weekly email.
Register For News Alerts
Article Tags
Canada Government, Public Sector Government Contracts, Procurement & PPP Real Estate and Construction Construction & Planning
Related Articles
COVID-19 (Coronavirus) Advisory: Commercial Landlord Survival Guide Gowling WLG
Commercial Tenancy Defaults And Rent Relief – Options For Landlords In Light Of The Global Pandemic Lawson Lundell LLP
Shelter In Place: BC Government Announces COVID-19 Survival Tools For Residential Landlords And Tenants Lawson Lundell LLP
COVID-19: Real Estate Update WeirFoulds LLP
Managing COVID-19 In Condos Miller Thomson LLP
Comparative Guides
FinTech
International Arbitration
Labour and Employment
Patents
Trademarks
Mondaq Advice Centres
Global
Trademarks in SAARC Countries
Global
Investment Immigration
Canada
Intellectual Property
Canada
Legal Risk Management
Canada
Environmental Law
More MACs
Upcoming Events
Mondaq Social Media