by Curtis A. Cusinato
Bennett Jones LLP
Your LinkedIn Connections
with the authors

We are now beginning the second decade of the private equity (PE) bull market in Canada. The surge of PE investment in the last 10 years has shifted the ground of Canadian and global corporate finance.

Private equity funds invested $70 billion in Canada in 1,281 deals from 2015-19. From 2010-14, $35 billion of PE was invested in 845 deals. Canada's experience follows similar investment trends in the United States and Western Europe. According to PitchBook Data, $2.7 trillion of private equity was deployed around the world in the past five years—up from $1.5 trillion between 2010-14.


As this remarkable story continues, three key trends are shaping the future of the private equity market in Canada:

Here's a closer look at these important developments and what they mean for funds, companies and investors.

UBS's latest Global Family Office Report says family offices continue to allocate sizeable shares of their portfolios to private equity. Families tend to be enthusiastic about investing in the area and PE fared the best of all asset classes in 2019. UBS says in 2020, direct private equity is the top area family offices plan to allocate more capital to.

So what accounts for this private equity/IPO dichotomy? 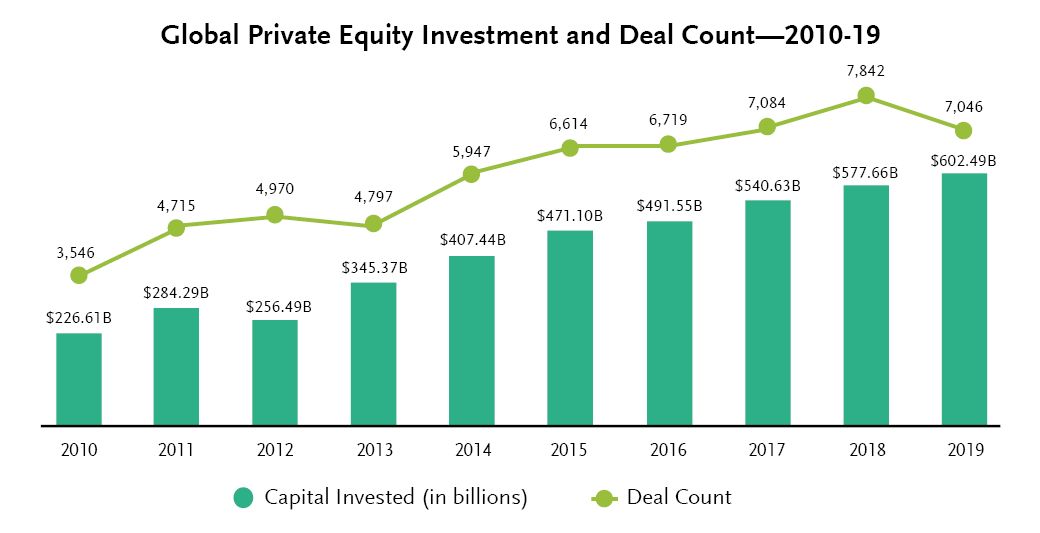 The private equity bull market has resulted in funds that invest in almost everything. Funds are increasingly specialized, sophisticated and focused on particular sectors—such as infrastructure (and near infrastructure), credit funds, health care, industrial and technology. PitchBook states that the increase in private investment in IT technology in Canada jumped from $3.5 billion between 2010-14 to $11.2 billion between 2015-19. The largest Canadian pension funds have been increasingly active in the technology space in the past 10 years, with a recent focus on fintech, AI and disruptive technologies.

As Environmental, Social and Governance (ESG) shapes investment decisions around the world, private equity is responding. KKR just closed its $1.3-billion Global Impact Fund, which will invest in business models that provide commercial solutions to an environmental or social challenge. In 2019, PE funds including KKR, Neuberger Berman Group and TPG became signatories to the IFC Operating Principles for Impact Management. This new market standard provides greater discipline and transparency in impact investing.

Looking Ahead to the Second Decade

The first decade of the private equity bull market in Canada was marked by phenomenal growth in funds raised and deployed and a shift in the attractiveness of public versus private investment. The next decade in Canada is likely to be more nuanced, with more capital and greater competition for deal flow, specialization and industry expertise of funds, and the expected availability of low-rate credit to support private equity transactions.