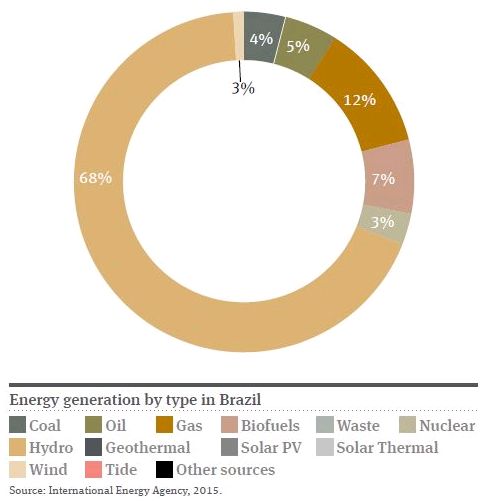 Brazil has a well-developed hydro and renewables sector that represent more than 39 per cent of the overall internal energy supply, and more than 78 per cent of the installed capacity. Nonetheless, there is unexploited potential in sectors such as wind, solar and floating solar PV. Indeed, Brazil is considered a very attractive market for low-carbon investments. The Bloomberg Climatescope report placed Brazil as the second most attractive market in the world and the EY Renewable Energy Country Attractiveness index ranked Brazil ninth out of 40 countries (best ranked in Latin America). The rising demand for energy is a key driver for development of renewable energy in the country.

Although there are no legislative targets for increasing alternative energy use, Brazil has recently committed to expand non-hydro renewables to 20 per cent of electricity supply by 2030. In 2013 the country launched the Ten Year for the Expansion of Energy 2023 where it set a target of increasing total installed capacity from 124GW to 195GW. The focus of this 71GW expansion is on hydro power (32GW) followed by wind (20GW), biomass (4GW), solar (3.5GW) and small hydro (2GW).

Between 2008 and 2012 new investment in renewable energy varied between US$7.2 billion and US$12.1 billion, falling to US$3.9 billion in 2013. The 2013 downward trend was caused by worries about policy support, reductions in technology costs, as well as a delay between auction rounds. In 2014 Brazil climbed back into the top ten countries for investment in renewables, and was the second of the developing economies. In 2014 approximately US$7.4 billion was invested in renewables – double the 2013 total. Wind attracted 84 per cent of the investment (US$6.2 billion), 117 per cent more than in 2013. A notable driver of renewable energy investment in Brazil is the government's online three stage reverse auction process where new power projects are introduced for private development three (A-3) to five years (A-5) in advance of delivery dates for the lowest possible cost.

The wind sector attracts most investor attention with an estimated current potential of an incredible 300GW. The wind power generation capacity grew 891 per cent between 2009 and 2014 and attracted 84 per cent of the investments destined for renewable energy in 2014. 2015 ended with 281 plants in operation with an installed capacity of approximately 7.1GW. Compared other BRIC countries India (20GW) and China (90GW), this leaves Brazil with considerable room to grow and significant unutilised potential.

Solar power is an unexplored energy source in Brazil despite its tremendous potential, particularly in the north east region where the solar radiation is of between 5.700–6.100 kWh/m² per day on average. The annual average solar radiation for the country is 1.200–2.400 kWh/m²/year. This is higher than Germany which is a well-established solar player with an annual average solar radiation of 900–1.250 kWh/m²/ year. Despite the high initial costs, solar micro and mini generators could be an effective solution for the difficulties faced in north and north east regions in terms of energy access.

The hydro sector is likely to continue to attract investment due to its 260GW potential of which 40 per cent is located in the Amazon region.

Law 12.187/2009 established the National Policy on Climate Change (NPCC). The NPCC establishes the expansion of renewable and clean energy usage as a part of the national strategy for medium-long term.

The Incentive Programme for Alternative Electric Energy Source – PROINFA is also highlighted in the national plan. It was created in 2002 to encourage the development of wind energy, biomass and small hydro, which has been successfully implemented, particularly for wind power which increased its installed capacity from 22MW in 2002 to the current 7.1GW.

Biofuel is the energy source with maximum tax incentives for importers and producers, offering significant deductions in two tax categories: theSocial Integration Program and the Contribution to the Social Security Fund.

In 2012 a new Electric Energy National Agency resolution (482/2012) came into force, to facilitate the connection of small renewable power generation plants to the distribution grid. The mini and micro generators can request the local distributor for grid connection.

The resolution also proposes the creation of an energy compensation system (net metering), whereby the owner of a small plant does not need to consume all the energy produced at the time of generation. Excess electricity can be fed into the grid giving the generator energy credit that can be used within 36 months.

Unlike most other Latin American countries, Brazil has not yet implemented significant tax incentives for the development of the renewable energy sector, despite the provisions of the Ten Year Plan. The high costs of initial solar development is still rendering the energy source uncompetitive in Brazil in the absence of appropriate governmental incentives. This may well change.

The Brazilian Development Bank – BNDES – has a number of different financing programmes specifically aimed at renewable energy projects. It is the largest lender in Brazil for renewable energy financing across technologies. In 2014, Bloomberg's New Energy Finances league tables for participants in utility-scale asset finance transactions in clean energy showed Brazil's BNDES as the top lead arranger, with a credit of US$2.7 billion, up from US$1.5 billion in the preceding year. BNDES requires that at least 60 per cent of the equipment is locally produced in order to grant loans, which presents an additional barrier. However, there are signs that this requirement may be relaxed to approximately 20 per cent, which should kick start lending in the solar sector.

Due to initial high costs, renewables had been unsuccessfully competing with conventional energy projects for a few years. However, in August this year wind projects accounted for 80 per cent of the capacity in an A-3 tender in which 670MW have been contracted. Furthermore, also in August this year, the government held a solar only auction awarding 30 projects for the total generation of 834MW of power.

In relation to the Conference of the Parties to the United Nations Framework Convention on Climate Change (COP21), Brazil carried out a series of public consultations with different representatives of the civil society and environmental organisations. Among the government goals are the elimination of deforestation in the Amazon forest, the creation of strategies for a massive reforestation within the country and the establishing of means for monitoring all Brazilian biomass.