Brazil: An Update On The BRPTO's Plan To Combat Patent Backlog In Brazil

Backlog is the first word that comes to an applicant's mind when considering Brazil for patent filings. Indeed, at its worst, official statistics indicated an average pendency time of 10,9 years at the Brazilian Patent Office (INPI) from filing of a patent application to patent grant. This is still by far the worst problem the country faces in terms of patent protection.

However, the Brazilian Patent Office has since launched an ambitious "Plan to Combat Backlog of Patents" in Brazil, aiming to reduce the backlog by 80% by the end of 2021, which would correspond to an average term of grant to approximately two years from the request for examination.

The INPI implemented the plan last August for all applications filed before December 31, 2016 where search or examination results are available from foreign patent offices in corresponding patent applications in the same family. That covered around 80% of applications pending in August 2019.

The plan has its main foundation on the massive publication of standardized office actions, which are basically a list of the prior art references cited outside Brazil. Applicants are invited to submit the same granted claims of a counterpart patent and/or arguments in favour of the claimed matter. The BRPTO also benefits from the fact that no response to those office actions are filed for abandoned cases. The abandoned cases can therefore be dismissed without receiving a substantive examination – estimates are that 20% of the pending applications are actually abandoned.

By the beginning of December 2019, that is, with little more than four months after commencing the plan, the INPI already managed to reduce the backlog by circa. 28,000 applications. The chart below shows how the plan is evolving since its beginning. 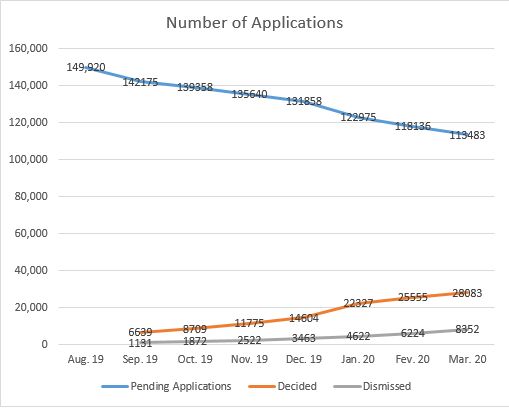 According to the BRPTO, pending applications at the end of March 2020 were generally divided as follows: 35% Chemistry; 25% Mechanical Engineering; 18% Electrical Engineering; 14% Instrumentation; 8% Other Technologies.

The chart below illustrates a likely outcome by the end of this year should the BRPTO manage to keep up with the same pace. 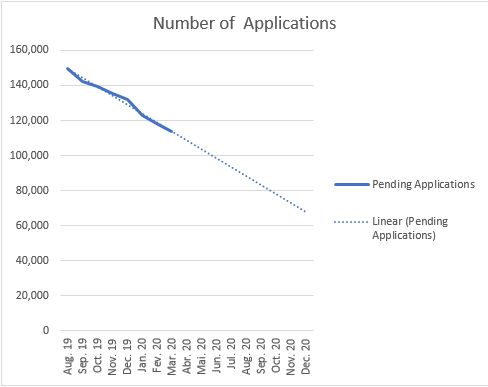 Since the BRPTO examiners are already well adapted to working remotely, it is unlikely that the progress will be interrupted by the current Covid-19 crisis. As can be observed in the above chart, in this scenario, the number of pending applications would be around 70.000, by the end of this year, which would correspond to a 53% reduction of backlog since the program started.

After many long years of frustration, it seems that applicants will finally see a massive improvement to the level of patent backlog in the BRPTO.