Australia: ‘Oh, What A Feeling!’ – Toyota and Jetstar battle it out over ‘jump’ trade marks

by Mark Williams
Phillips Ormonde & Fitzpatrick
To print this article, all you need is to be registered or login on Mondaq.com.

Many of our Australian readers will be aware of Toyota's television advertisements in which the advertisement ends with the actors jumping into the air, with the 'jump' captured in a freeze frame. This 'jump' is usually accompanied by the now trademarked catchphrase 'Oh, What A Feeling', and/or a jingle.

In August 2012, Toyota Motor Corporation Australia filed a number of trade mark applications for the Toyota 'jump' in respect of motor vehicles. A number of the marks are simply images, whereas others are movement marks.

The movement mark they sought showed a boy leaping into the air from a standing start, extending his arms and legs, and forming a star shape. The image attached to the application was a still of a scene from the video clip. The trade mark does not include words or sound. Movement marks are now deemed acceptable by the Australian Trademarks Office.

Australian airline, Jetstar, also utilise a jump in many advertisements. Their jump could best be described as a 'star jump' (perhaps unsurprising given the name Jetstar). As far back as 2007, there were murmurings from Toyota that Jetstar had misrepresented the Toyota jump in their advertisements. A spokesman for Toyota highlighted the parallels between the Jetstar jump (a 'star jump') and the Toyota 'jump'. However, no action was taken at the time.

Previously, the only remedies available to Toyota would have been via the common law tort of passing off and/or for breach of the Trade Practices Act, now known as the Australian Consumer Law. However, it seems Toyota will now have a further weapon in its arsenal to take action against infringing 'jumps', namely trade mark registrations. But of course, there is the vexed question of what sort of 'jump' would constitute trade mark infringement? We will leave that question for another day.

In late 2012, Qantas (the airline that owns Jetstar) opposed a number of the Toyota 'jump' applications. The opposed trade marks are trade marks which include a star-type jump. The remaining trade marks, which include what could best be described as a 'knee-bend-jump-for-joy' jump, have proceeded to registration.

In early 2013, Qantas filed four applications for its own 'jump' trade marks, and two of these marks (ones resembling a 'star jump' below) have been opposed by Toyota. 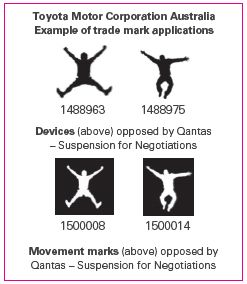 To date, Toyota have filed for thirty 'jump' trade marks. Nine of these (generally the ones resembling a 'star jump') have been opposed by Qantas, the remainder have been registered. 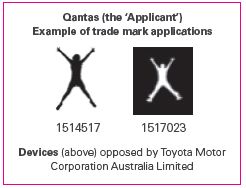 As at the time of publication, none of the opposed marks (either filed by Toyota or by Qantas), have reached the stage of filing evidence in support. A number of the oppositions to the Toyota trade marks have been suspended for negotiations.

So we may see an amicable agreement between the two parties, perhaps limiting Toyota to a 'knee-bend-jump-for-joy' jump and Jetstar to a 'star jump'.