At the end of January 2017, the Australian Taxation Office ("ATO") updated its draft of the Privatisation and Infrastructure—Australian Federal Tax Framework ("Framework") and issued a Taxpayer Alert TA 2017/1 on stapled ownership structures ("Alert"). Together, the Framework and the Alert consolidate the ATO's current thinking on major federal taxation topics in the context of infrastructure investment and utility privatisation. If the thrust of the ATO's thinking on many of the issues dealt with in the Alert and the Framework is pursued, we are entering a period of resistance from the Commonwealth government to risks to its revenue base in the infrastructure and privatisation areas and, ultimately, may see some the most active Commonwealth taxation review of the sector since the period that lead to the introduction of Division 250 of the Income Tax Assessment Act (Cth) ("ITAA") a decade ago.

This White Paper refers to some of the projects that may now require careful consideration and adaptation to the ATO's views. In short, the ATO is signalling in the Framework and the Alert that it will increase scrutiny and compliance action on often-used deal structures in the context of infrastructure investment and privatisation and that it will contest the incorporation of those structures into proposed investment or acquisition ownership structures. In turn, we deal with:

Substantial investment in, and recycling of, infrastructure assets continues apace. Highlights of the rail project pipeline on Australia's East Coast include Sydney's new rail metro, a A$12.5bn seven station addition to the existing network, connecting Chatswood and Bankstown via the CBD. The Expression of Interest request for the Central Station Main Works packages was released this month, and during this year, procurement is also expected on the Southwest Station and Corridor Works package followed by packages for stations, mechanical and electrical works, and some linewide packages. The New South Wales State Government also indicated in that project's October 2016 business case that it may pursue "value capture" opportunities from development along rail corridors such as these, and the State of Victoria released earlier this year its own value creation and capture framework document. Other New South Wales rail projects to commence later this year include construction of the two-way 12km Parramatta Light Rail estimated at A$3.5bn.

In Melbourne, the Victorian government's bid process for the Melbourne Metro Public Private Partnership A$11bn twin tunnel and stations extension to the Melbourne rail network is progressing well with three consortia already shortlisted. A program of early works has already been awarded, rail systems tenderers have been shortlisted, and rail infrastructure packages will also be issued to market this year.

In Queensland, the Brisbane City Council has announced a business case to be completed by May on the expansion of the Brisbane Metro Subway System. The expansion consists of 3 new and 18 upgraded stations including two that will connect to the state government's proposed Cross River Rail project.

The Commonwealth government is also actively engaged in rail projects and is currently completing a market testing process with industry to finance and build the Inland Rail, a new A$10bn freight rail line connecting Melbourne and Brisbane.

Road and Other Transport Projects

Highlights regarding road and other transport projects include the upcoming privatisation by the New South Wales State Government of the WestConnex motorway, presently under construction. The government has appointed scoping study advisors to this project with the study report due early this year. Although it is not yet clear how the sale will be packaged, one possibility is a sequential majority sale of components of the motorway timed so that revenue performance becomes known to bidders, followed by a sale of the remaining state interest.

The Western Distributor Project in Victoria is being led by the Victorian Government and Transurban with some construction components still to be tendered. In Queensland, the Brisbane City Council has just announced an arrangement to allow Transurban to fund the upgrade of, and then maintain, the Inner City Bypass. In exchange, Transurban will be allowed to increase the tolls on its existing Brisbane toll roads.

The results of the March 11 election in Western Australia suggest the Perth Freight Link road project, the planned privatisations of two ports, as well as of Western Power (the state transmission and distribution network owner), and of some Horizon Power assets are all unlikely to proceed. Nevertheless, the new Labour administration has proposed a new passenger rail project for Perth, indicated its plan to establish an independent advisory body to progress state infrastructure strategy, and will also join all other Australian states and territories who have already developed their own unsolicited proposal guidelines for infrastructure (Western Australia has unsolicited bid guidelines for state-owned land only).

Finally, no pipeline update could omit the Commonwealth's announcement of the development of Western Sydney Airport, a second major passenger airport for Sydney at Badgerys Creek. Sydney Airport Group, the listed operator of Sydney (Kingsford Smith) Airport, has a right of first refusal to undertake the project, but must decide whether to exercise this right later this year. If Sydney Airport Group does not exercise its right the project is likely to go to open tender.

Many existing infrastructure ownership transactions use combinations of trusts and companies (or public trading trusts) to separate the "active" (i.e., toll revenue-earning) and "passive" (i.e., real estate lease) components of a business. A trust which does not carry on "trading business" is a flow-through trust under Division 6 of Part III of the ITAA, and the income that a unitholder receives is taxed at the unitholder level and at a much lower rate than the 30 percent corporate tax rate. Foreign capital providers can be particular beneficiaries of these structures through the managed investment trust ("MIT") tax rules that allow nonresident unitholders to receive net rental income at concessional withholding tax rates (often 15 percent).

The Alert works through four types of stapled arrangements—royalty, finance, synthetic equity, and rental—which have been developed over the years. The rental staple, depicted in the Alert (below), is perhaps the most commonly used staple in the infrastructure space. 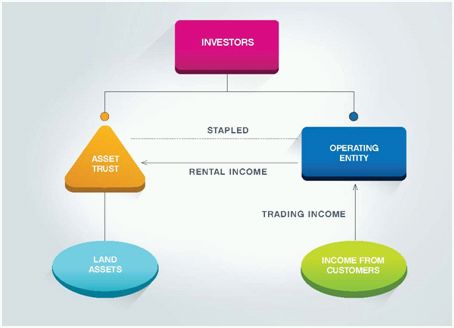 In a rental staple, the asset trust's business is principally as lessor to, and recipient of rent from, an operating entity. However, the division of the overall business into asset and operating sides is not one "that third parties acting at arm's length would usually enter into, and it is often also the case that the business is not one capable of division in any commercially meaningful way".

The Alert flags the application of the general anti-avoidance provisions of Part IVA of the ITAA to staples with which the ATO is concerned—those that, in its terms, "attempt to fragment integrated trading businesses in order to re-characterise trading income into more favourably taxed passive income... The income that might be expected to be subject to company tax is artificially diverted into a trust where, on distribution from the trust, that income is ultimately subject to no tax or a lesser rate than the corporate rate of tax". The ATO's concern only increases if the operating entity in the staple also claims large deductions for the interest costs in loans made to it from the nontrading trust (because the taxable income at operating entity level is then insignificant).

The ATO emphasises that the concerns dealt with in the Alert do not relate to Australian real estate investment trusts ("REITs") that do not typically involve stapled structures or, if they do involve staples, do not incorporate material cross-staple dealings outside the REIT's core operating business, which is the receipt of rentals from third party tenants. Nor does the Alert apply to the privatisation of land rich government businesses.

Chapter 1 of the Framework details the ATO's views on the "securitised licence" structure which has been in use in the Australian social PPP market for some years. The ATO updates and expands its previous October 2015 concerns and targets the development in recent years of "non-vanilla" tweaks on the early structures. It expresses disagreement in particular with:

The privatisation of land rich government businesses into stapled structures, not of the vanilla type described in Chapter 2 of the Framework, will be reviewed closely. Of particular note:

Finally, in Chapter 3, the ATO deals with a "grab bag" of other topics common in infrastructure deals, including government grants and control for the purposes of Division 6C (especially a negative veto power in the context of the carrying on of a trading business). The comments that grants are assessable seems inconsistent with the previous general position that grants received before or during construction are not in relation to the carrying on of business (because the business has not yet commenced) and may drive further social PPP deals to request more government contributions in the form of contractual commitments by governments to procure the construction of, and pay for, specific parts of project works. The ATO's position on negative control still seems inconsistent with industry's view that the correct legal position is that a veto right does not constitute control.

We emphasise that we have not dealt with all the topics which the ATO discusses in the Framework and the Alert. In short, our perspective is that the ATO is looking to scrutinise and apply compliance resources to:

The ATO is also signalling to potential bidding consortia and financiers and their advisors that well before settling on their ownership and financing arrangements, including in the types of projects referred to in our pipeline above, the ATO should be approached for its views. The ATO would like to create a level playing field so that all bidders for major infrastructure projects can bid with the same degree of awareness of tax compliance risks. Going forward, there is likely to be resistance against the incorporation of features the ATO flagged for concern in the Alert and Framework.

The Alert was published, but the Framework is not yet on the ATO's website.