Australia: Investing in Australia? Major changes to FIRB commence in 2021

by Natashia Ackroyd
Holding Redlich
Your LinkedIn Connections
with the authors

The Treasurer recently announced comprehensive reforms to Australia's foreign investment review framework and Foreign Acquisitions and Takeovers Act 1975 (FATA). These changes are scheduled to commence on 1 January 2021 and will replace temporary measures in force since 29 March 2020 (previously discussed here) which saw the threshold amounts used to determine whether foreign investments are subject to FIRB approval reduced to AUD$0.

Key measures to strengthen the existing framework include:

The Treasurer has the power and discretion to review ‘significant actions' by foreign investors to acquire interests in securities, assets or Australian land and actions taken in relation to Australian entities and businesses.

The Treasurer reviews all notifiable actions and some significant actions and has the power to make orders against investments which are contrary to the national interest.

Foreign investors who fail to meet their obligations under Australia's foreign investment legislation may receive an infringement notice, a civil penalty, and/or be subject to criminal prosecution.

The proposed reforms include a new national security test, with the existing national interest test to remain unchanged. This new test is said to be narrow and will not affect how most investors interact with FIRB when making non-sensitive investments. If an investment was previously exempt, it will remain exempt under these changes unless it is contrary to Australia's national security and fell below the previous monetary thresholds.

Foreign investors who start to operate or acquire a direct interest (generally more than 10 per cent) of a sensitive national security business will need to notify and obtain FIRB approval. This means that foreign investments of national security concern will be screened regardless of value or the investor's nationality.

What will and will not be considered a sensitive national security business under regulations remains to be seen, the consultation process currently underway will consider concepts including, but not limited to:

Mining and energy, telecommunications, infrastructure, defence and technology all spring to mind as sectors that may be impacted by the new requirements.

The Treasurer will be able to call in any investment which raises national security concerns before, during or after the fact, including those exempt from mandatory notification.

Once called in, the investment will be subject to the new national security test in a manner consistent with those investments which are notifiable on a mandatory basis.

The Treasurer says that the definition of sensitive national security businesses will be deliberately narrow given the majority of investments into Australia are unlikely to be of concern. This time-limited call-in power will allow the Treasury to screen investments where national security concerns arise without imposing the regulatory burden of mandatory notification requirements across broad sectors.

The call-in power is time-limited to provide investors with a greater sense of certainty. We expect guidance from the Treasury regarding the types of investments which are at risk of being called in to inform investors' decision whether to notify voluntarily.

The Treasurer will have a last resort review power to reassess previously approved foreign investments where national security risks subsequently arise. This power will not be retrospective and will apply only to future foreign investment reviewed under the FATA.

The last resort review power will allow the Treasurer to impose conditions, vary existing conditions and as a last resort, require the divestment of foreign ownership of a business, entity or land, where it can be substantiated that:

The last resort review power will be subject to the Treasurer's satisfaction that there have been efforts to negotiate in good faith with the foreign investor. The Treasury will prioritise an outcome of eliminating or reducing the risk without action under the FATA. All available regulatory mechanisms will need to be exhausted before using this power.

As part of the reforms, the Treasurer and ATO will be given monitoring and investigative powers in line with other business regulators to assist with the enforcement against breaches of foreign investment legislation. An additional tier of harsher infringement notices is planned, infringement notices will also apply to all types of investment, not just residential real estate as is currently the case.

The reforms also include harsher civil and criminal penalties: 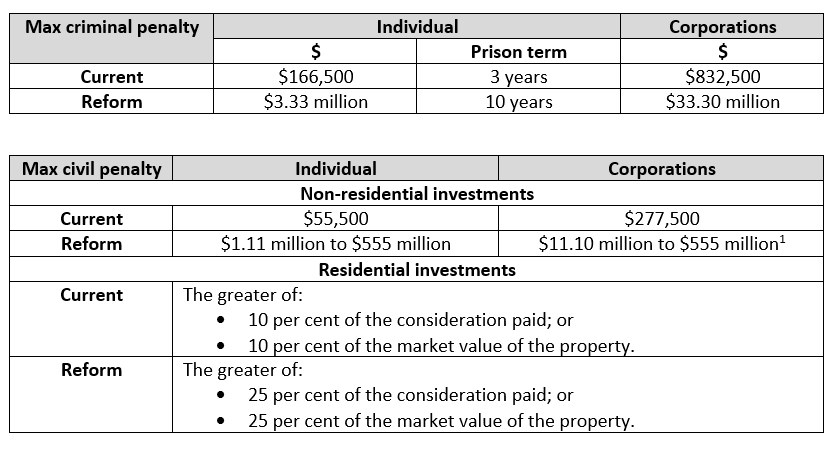 The proposed reforms include important mechanisms for investor certainty and transparency, as well as measures to streamline less sensitive investments.

Investors will be able to apply for time-limited exemptions enabling them to make acquisitions without the burden of case-by-case screening. Exemption certificates will be granted where an investor is assessed as not posing a risk to national security. Certificates will range in length and value and may be subject to conditions such as special reporting requirements.

Certain investments made by entities currently classified as ‘Foreign Government Investors' will be exempt from review under the reforms. Exemptions will be granted where no foreign investor has or could be perceived to have influence or control over investment or operational decisions of the investing entity and underlying assets.

For example, a private equity fund with a substantial foreign government investor base but investment decisions and assets are managed by a local third party. If the foreign government investor has no management rights, does not know specifics of the particular investments and does not have direct or indirect influence or control over the investment strategy of the fund, the fund may be eligible for an exemption from review.

1 All monetary figures have been calculated using the Commonwealth penalty unit as at 13 November 2020.

This publication does not deal with every important topic or change in law and is not intended to be relied upon as a substitute for legal or other advice that may be relevant to the reader's specific circumstances. If you have found this publication of interest and would like to know more or wish to obtain legal advice relevant to your circumstances please contact one of the named individuals listed.