Australia: Western Australia - Are we getting ahead of ourselves in business confidence?

by Sam Woods
KordaMentha
Your LinkedIn Connections
with the authors

With business confidence in Western Australia at its highest point in over a decade, it is clear that many are optimistic about the future of the WA economy. But are we getting ahead of ourselves?

The CCIWA Business Confidence Survey for the December 2020 quarter is headlined WA Business Confidence rises to highest level since 2007. This is not surprising given the amount of energy that is apparent on the ground day to day in the local communities and various industries. But while this energy and sentiment is burning a hole in the pocket of many consumers, others are opting for caution and saving.

Right now, we have an extremely buoyant resources sector, cheap debt that is more accessible than it has been in years, confidence from the Reserve Bank of Australia that the cash rate will remain low for the next three years, a residential housing market supported by Government stimulus and relief measures, circulation of $17 billion into Western Australian households and business to support spending ( CCIWA pg 5), and let's not forget an estimated $6 billion that Western Australians usually spend overseas annually ( CCIWA pg 6) flowing through our local economy.

But while Western Australia is experiencing an upswing and resurgence in confidence we have not seen in several years, is this sustainable or is the excitement getting the better of us? Where will we be when Australia's internal borders open, followed by international borders? The question begs, do you throw caution into the wind that this will last forever and spend big on discretionary items like jet skis and overpriced secondhand motor vehicles, or even pay above recent market parameters for the family home? Alternatively, is this for the short term and so you take the other extreme, avoiding the share market and put your money into a low interest-bearing bank account with one of the major banks, ultimately waiting for the hype to pull back.

Despite our want to talk about how Western Australia is a diverse state with various contributors to growth, you just need to look at what iron ore has done recently to fill the State Government's coffers to a surplus position that is the envy of all other states, territories and the Federal government. Western Australia is a mining state and will continue to be for a long time yet. In January 2021, the Western Australia Government reported that mining accounted for 43% ($135.3 billion) of Western Australia's economy in 2019-20, which was a record high. Construction was next best for 5% at $17.3 billion. We are in a significant production phase as miners work as hard and as fast as they can to produce while resource prices are high.

There are two factors that have traditionally been the main contributors behind a booming Western Australia cycle, construction phase in the mining sector (as opposed to the production phase which we are predominantly in) and population growth. It appears these two factors have been forgotten. And so, the question is, is the hype short term and are we staring down the barrel of an economic shock because of the excitement generated from coming off a low base, or is this a fundamental shift supported by sustainable economics?

Statistics from the Department of Mines, Industry and Regulation show that nearly $19 billion was invested into the Western Australia mining sector in 2019-20, up from $17 billion the previous year, and that this is the first year on year increase in mining and petroleum investment in Western Australia since the iron ore and LNG investment boom of 2012-13. To compare, in 2012-13 a record $48 billion was invested in the State's mining industry, which is more than the total amount that has been invested each year since 2016-17 across the whole of Australia. 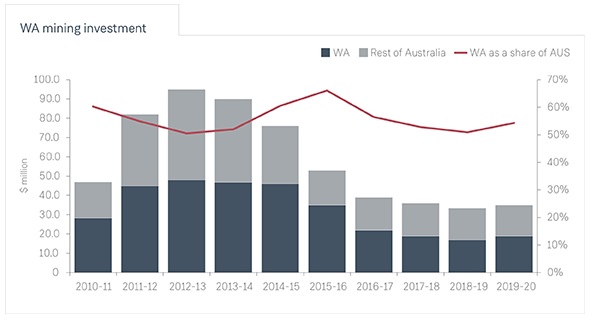 Furthermore, as of September 2020, Western Australia had resources projects in the development pipeline valued at an estimated $129 billion, made up of an Under Construction/Committed estimate of $28 billion and Planned/Possible of nearly $101 billion. This is a long way off the heights of 2012/13, where in March/April 2013, it was reported Western Australia had an estimated $ 177 billion worth of resource projects under construction/committed, and a further $120 billion identified as Planned/Possible projects, reflecting a total development pipeline of $297 billion. Even in the lead up to this period, at 1 September 2010, Western Australia had $98 billion Under Construction/Committed and a further $165 billion Planned/Possible.

The LNG boom experienced in 2012/13 is unlikely to be seen again, at least in the short term, and iron ore and gold prices between the two periods (2013 and 2020) are broadly comparable. 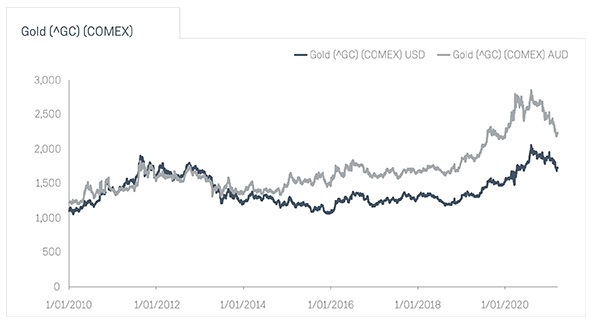 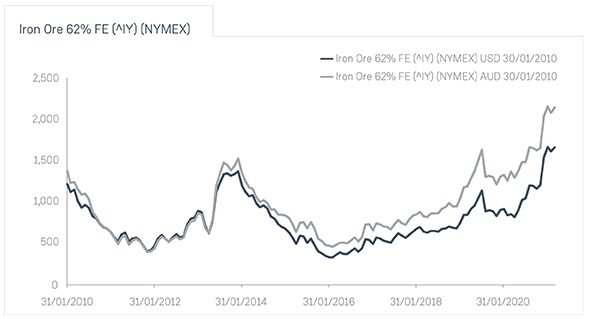 If resource prices were to fall in the short term as dramatically as they have risen and we are relying primarily on production as a source of economic prosperity, the downside could be as extreme as the upswing we are currently going through. It would also then be reasonable to question how much of the $101 billion Planned/Possible investment in the current development pipeline will come to fruition. A potential shock could quickly evaporate the business confidence referred to by the CCIWA, and preparing for this financially could prove critical given the runoff of Government support.

Between 2005 and 2020, Western Australia showed an annual population long-term growth trend of 1.9%, and while the trend was positive for the three years in the lead up to 2020, our annual population growth has now been below 1.9% since December 2013. 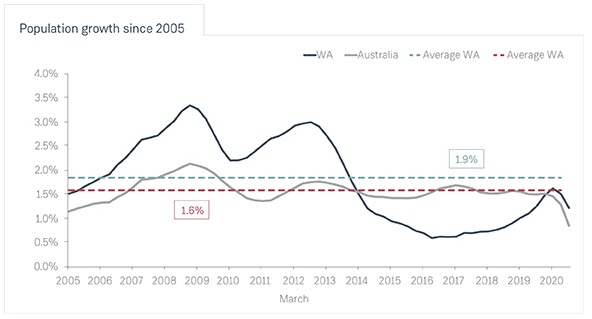 This is problematic because low population growth puts downward pressure on an economy. For Western Australia A, overseas migration has traditionally played a significant role. In March 2021, Rebecca Cassells, Deputy Director at Bankwest Curtin Economics Centre, wrote in the Business News "Overseas migration has filled this gap and has been one of the biggest drivers of population growth for WA in recent years. But on latest data, this was almost zero, and is not expected to recover until people can move freely into and out of Australia again." In fact, data from the ABS shows in the last two quarters to 30 September 2020, Western Australia has experienced negative net overseas migration (-228 to 30 June 2020 and -1,685 to 30 September 2020), as have most States and Territories, resulting in an overall negative position for Australia.

It is clear that unless there is a return to the normal way of life i.e. the relaxing of borders and allowance of international travel, it's hard to see where our population growth is going to come from and what's going to drive it.

This does not appear to be problematic for many Western Australian's right now, but what happens if the cycle focussed on production is short lived? Alternatively, the increased activity in the residential construction sector looks good on volume, but what about margin? In the space of one year we have seen the price of laying a brick increase by 200%, putting financial pressure on home builders who entered into fixed price contracts through the escalation phase. Without thriving industry, how are we going to achieve population growth?

We will leave you to make your own judgement in a year where news in the morning was considered outdated by the afternoon. But with the factors laid out above in mind, Western Australian businesses should ensure continued focus on their client base to make early identification of changes in revenue and costs. Sensitising forecasts for scenario planning are also wise in a market that comes with volatility, uncertain timeframes and factors. In saying this, there is the old saying 'make hay while the sun shines' – we think this couldn't be truer right now in Western Australia.