The cost of data storage has plummeted and our computing power to use and analyse data has increased exponentially.

"Big Data" is the term for a collection of data sets so large and complex that they cannot readily be processed with traditional data processing applications in a reasonable amount of time. Attempts to meaningfully define "Big Data" focus on size of the data sets (volume), the real time way in which much of the information is captured by a system (velocity) and the increasing variety of disparate data sets that can be accessed (variety).

In addition, movement sensors, building access systems, smart power metres, surveillance cameras, smart cars, smart televisions, and all manner of devices now Internet enabled, facilitate the collection and use of information logs. This has led to the emergence of the so called "internet of things", or IOT, referring to the increasing number of connected objects relative to the population. The IOT means more data created at an accelerated rate, which compounds and feeds into the volume, velocity and variety of Big Data sets. The emergence of the IOT is illustrated in the following diagram: 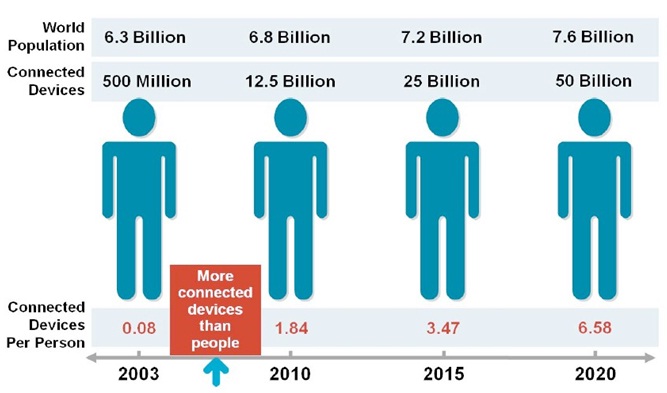 The shift towards consuming computing as a hosted, utility-style service (cloud) has revolutionised the way in which organisations can analyse data. An organisation needing massive amounts of processing power to process complex data queries can ramp up their access to processing power during the project and afterwards scale back that access. This is all possible at steadily declining prices using new models of access to computing power that were not available five years ago.

To illustrate, when scientists first decoded the genome in 2003 it took ten years of work to sequence the three billion base pairs. Now that much DNA can be sequenced in a day4.

There are numerous examples of organisation collecting and harvesting large amounts of data in an attempt to differentiate themselves in the marketplace. Among the more notable:

The uses of big data are many and varied, the only constant being that it will underpin much commercial advantage in the post industrial economy. Studies by the World Economic Forum (WEF) have described personal data as a new asset class - the new "oil" for business. The WEF has further predicted the use of big data tools for the better targeting of services, prediction and prevention of crisis, understanding population health and improving health care, reduction of food spoilage and identification of areas in food related distress and tracking the movements and conditions of refugees6. In its 2011 paper entitled "Personal Data: The Emergence of a New Asset Class" WEF noted7:

"We are moving towards a "Web of the world" in which mobile communications, social technologies and sensors are connecting people, the Internet and the physical world into one interconnected network. ... Personal data will be the new "oil" - a valuable resource of the 21stcentury. It will emerge as a new asset class touching all aspects of society. At its core, personal data represents a post-industrial opportunity. ... As personal data increasingly becomes a critical source of innovation and value, business boundaries are being redrawn. Profit pools, too, are shifting towards companies that automate and mine the vast amounts of data we continue to generate."
'Big Data, Big Impact: New Possibilities for International Development'

A McKinsey study has further concluded that Big Data could be the defining basis for success in the post industrial economy. We are already seeing large gaps emerge between the growth of traditional business failing to heed the impact of Big Data on their decisions and those companies embracing the power of Big Data to direct decisions8:

A key feature of the 'big data' era is growth in the volume and variety of unstructured data.

While 'Big Data' can include structured data in a relational database, in the majority of cases large tracts of data will be stored with no apparent meaning beyond its face value. Skills are required to create meaning from disparate data sets by pursuing inquiries or associations between those data sets. The logs created by a smart power meter, a building's air conditioning system, machine logs and most of the so called "digital exhaust" created by use of the internet will not be stored in a traditional relational database.

Furthermore, much of the relevant data is transient and traditionally not stored after the purpose of its creation has passed (the data of an internet phone call, the watching of a Youtube video), yet increasingly new opportunities and optimised products and services can be created by applying analytical models to these data sources. Such data is generally defined as "unstructured" data as opposed to traditional "structured" data.

Attempts to measure the amount of unstructured or semi-structured data are imprecise, but it is generally accepted to account for 80 to 90 percent of the world's data.

The IDC "Digital Universe" study sought to analyse total enterprise data growth in the period 2005- 20159. By 2015, by far the dominant form of data will be so called "unstructured" data.